I’ve seen the Portland Trail Blazers play on the road a lot. In fact, after doing the math I figure that I have seen them play 17 different times in 15 unique NBA stadiums.

Every year since 2011 I would go to one road game to support the team ranging from a spring game in Los Angeles to a winter game in Houston. Just two years ago those single-game trips turned into two-game trips. It was at that point where I decided that I wanted to combine my passion for writing while sharing my different experiences at these arenas with others who might want a peek behind what it’s like to attend an NBA game on the road: That’s how the "In-Arena" report came to be.

The last time that I wrote one of these "In-Arena" reports came two years ago after the Blazers defeated the Heat by double-digits in Miami the day after blowing the Atlanta Hawks out of the water.

For my "road trip" last season I traveled to both Toronto and Boston to see the Blazers get pummelled by the Raptors and then lose in heart-breaking fashion at the hands of Al Horford in an early game at TD Garden.

I wanted to produce more "In-Arena" reports, but just never did find the time and energy to get them done last year. However, when I found out which road games I would be attending this season, I just knew that I had to give these recaps another run; At the very least, I really enjoy writing them. And this year, my biggest hope is that these next two reports are even better than the previous ones.

So enough backstory, let’s get into the actual game itself.

Best moment from inside the Wells Fargo Center: Seeing the different mascots in attendance for Franklin’s birthday party festivities attempt to entertain the crowd through various different mascot-like activities such as dancing, dunking, and competing in absurd contests.

The first thing that needs to be said about this game to put it into context is that it was early. Luckily the Blazers have been on the east coast for the better part of the past five days due to the All-Star break, so the early tip-off could have gone a lot worse. 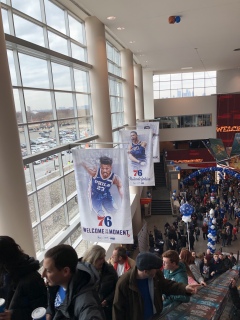 Both teams did come out of the gates a bit sluggish. The Blazers were able to take advantage early before Philadelphia found a rhythm and managed to stay on top for most of the half.

Being firmly entrenched in the game while even having the lead was a great confidence booster for the Blazers as they headed into the break against one of the top teams in the east.

But despite having the slim lead at halftime, I don’t think anyone in the building was prepared for what was going to happen in the second half.

The Blazers came out and flat-out dominated the Sixers whose raucous fans suddenly went quiet as their supposedly "stout" defense allowed the opponent to put up 41 third-quarter points effectively ending the game then and there.

The help side defense never materialized for the Sixers in the second half as it seemed like the Blazers dunked the ball three-times their normal average. When Jake Layman had the runway down the middle and nobody contested his dunk you could tell that the Sixers were done. Suddenly that silence turned to groans.

It needs to be said that this is Philadelphia, a sports city that lets its teams know when they are not performing well. That was the case in the second half today as the Blazers outscored the Sixers 71 to 59 and out-rebounded them by TWENTY.

The Sixers meltdown was very self-satisfying to watch as the Blazers showed the rest of the league that they will not be an easy win for any opponent. Next-up they will play the Cleveland Cavaliers at Quicken Loans Arena on Monday.

I had a great time at the game this afternoon, and it was not just because of the final score. There was the electricity in the building of being in a sports city like Philadelphia, even if it was only one in the afternoon.

The scene around Wells Fargo Center was pretty strange this afternoon and perhaps it had to do with tonight's big hockey game between the Philadelphia Flyers and Pittsburgh Penguins which took place at 8 p.m across the street at the football stadium. Walking around downtown before commuting south I definitely saw more people in hockey jerseys than in any 76er gear.

Wells Fargo Center is located in a large complex of stadiums south of the downtown core. It’s right next to Lincoln Financial Field (home of the Eagles), and Citizens Bank Park (home of the Phillies). Despite the hockey game not starting for seven hours after the Sixer game tipped, the tailgating was underway in an adjacent parking lot. 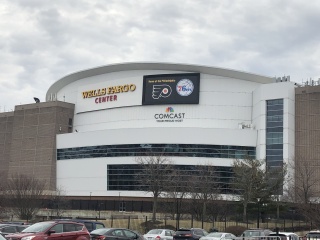 What really stood out to me about the stadium was just how steep the seating bowl was. The arena is more tailored towards hockey so the seats seem further from the court. This steepness did give off the effect that everyone was over the court and that the building could actually hold more people than its written capacity. While that’s obviously not true, the way the stadium is designed makes for a really intimidating basketball atmosphere.

The biggest event during the game was the celebration of Franklin’s birthday. Franklin is the 76ers mascot and to celebrate he invited other mascots such as Clutch the Bear (Rockets), The Coyote (Spurs), Chuck the Condor (Clippers), and even Go the Gorilla (Suns). Throughout the game, they danced during some timeouts, did a dunking routine, and took pictures with fans. 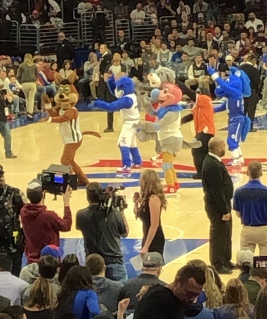 However, it also felt like the 76ers played this birthday event up too much and might have oversold it.

Some Sixers staffers were wearing Franklin birthday T-Shirts, the running video board always showed that it was indeed his "birthday celebration game," and even the pads over the hoop stanchions were replaced with ones that promoted the fact that it was his birthday.

It was a little over the top, but I feel like the amount of on-court entertainment activities during the breaks more than made up for it.

As with almost every team, the Sixers run a promotion based on their opponents missed free throws. If any opposing player misses a pair of free throws then the fans receive a free small fry and frosty from Wendy’s. Kanter came the closest to providing this gift to the fans, but it was not meant to be, INtriguing concept, but obviously not as good as the Chalupa promotion.

Another thought: It’s always fun to see Boban Marjanovich play and the first half was no exception. I especially loved how the 76ers announcer referred to him as "Bobi" throughout the game. He always brings some electricity to the crowd.

So overall, if the opportunity ever presents itself, I would totally suggest attending a game in Philadelphia. It is a fun city to explore, has a good stadium location, and has energetic and passionate fans who elevate the atmosphere of any basketball game. 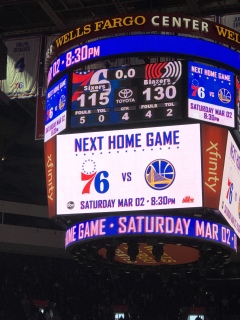 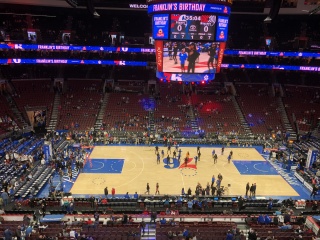