I posted this a while ago as a comment, but I decided to make it a post and add some video clips as well.

A lot of the Blazers’ lineups contain Harkless and/or Turner, who are wings that can’t shoot threes. Opposing defenders can thus sag off Turner/Harkless to help inside the paint, which makes life a lot tougher for CJ/Dame/Nurk. I think it’s telling that the Blazers’ offensive efficiency has skyrocketed when Connaughton gets Harkless’ minutes—when Connaughton and CJ are on the floor, the Blazer’s O-rating is 115.8 (which is the highest of all the two-man lineups that have gotten significant minutes this season). Similarly, when Connaughton and Dame on the floor, the O-rating is 108.4, which is again very high. And finally, Connaughton/Nurk has an O-rating of 105.4.

I know a lot of times advanced stats are criticized as context-blind and not completely correct, but I think this is one of the times where the advanced stats support the eye test. When Connaughton comes into the game, the spacing immediately improves and the Blazers get easy buckets inside. A lot of times, opposing teams try to trap McLillard (but especially Dame) off the high pick and roll.

If the outlet here is Harkless or Turner, the defense has just blown up the entire play, since neither of them can make jumpshots from outside, and the ball usually ends up back in McLillard’s hands, giving them a short shot clock to work with.

If the outlet is Connaughton, he more often than not gets an open three or finds the open man as the defense scrambles to compensate for overhelping.

Let’s see some examples of this in action.

The Blazers start by running CJ off and Nurk and Vonleh screen. You can see Connaughton under the basket setting the pick to free up Vonleh. Courtney Lee, CJ’s defender, gets screened off by Nurkic so Porzingis steps up to guard the passing lane, because if he doesn’t, Dame will pass the ball to the corner for an open shot. Now, Nurkic steps up and sets a screen for Lillard and then rolls hard to the rim. Because Lillard is a threat to shoot the ball, O’Quinn has to step up to prevent the shot—but by this point Nurkic has rolled to the rim (helped by a Pat Connaughton screen) and forced a mismatch on Tim Hardaway Jr. down low. Since this would be two free points for the Blazers, the Knicks have to switch the play, sending Hardaway up to the top of the key to guard Connaughton, and O’Quinn down low. Lillard sees this chaos happening and passes the ball to Connaughton for an open three.

Different play, same concept: O’Quinn has to step up to prevent Lillard from shooting the ball, Nurkic has the mismatch down low, Porzingis is forced to go deny Nurkic, leaving Connaughton open for the triple.

Here, Tim Hardaway Jr., Connaughton’s defender, doubles Lillard (https://imgur.com/a/nzEOL). If the outlet here is Harkless or Turner, he can get away with this—however, this means Connaughton is left alone. Nurkic sets a great pick to get him open, Lillard makes the correct pass, and Connaughton knocks down the triple.

Now let’s take a look at this CJ drive. Nurkic passes the ball to the corner, and CJ has his defender beat. However, Kelly Oubre Jr., who’s guarding Connaughton, can’t really help because if he commits, Connaughton will get an open three. He makes a halfhearted attempt to swipe at the ball and CJ gets a layup.

Now what happens here if we have Harkless or Turner instead of Connaughton here?

While Embiid, not Simmons, makes the crucial defensive play, look at how far Simmons is helping off Turner. He’s literally daring Turner to shoot the ball.

Similarly, there’s this clip against the Nets, where Turner is guarded by Joe Harris. Harris completely ignores Turner to help on the CJ drive. Look at how far he’s playing off Turner: 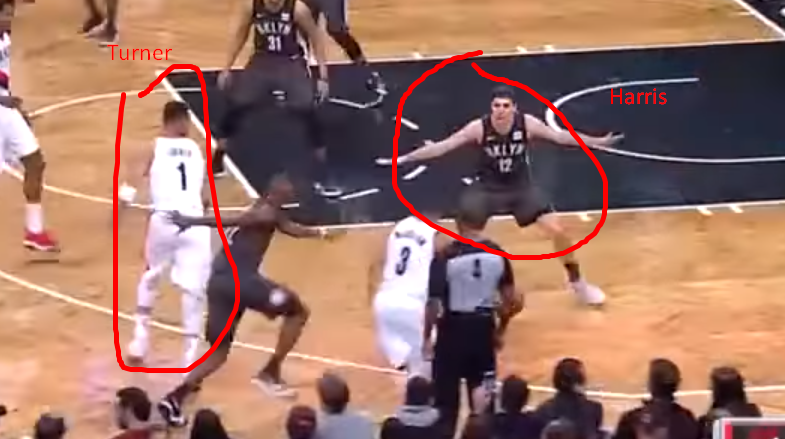 After being double-teamed [See screenshot], CJ passes it back to Turner, who to his credit knocks down the triple. But for the Nets, this is a good shot, as they would much rather see ET taking a three than CJ taking a midrange jumper. There’s a lot more clips like this, but I think you guys get the point, and I’m tired of trying to find Evan Turner three-point attempts (p.s. anyone know where you can rewatch archives of old games?)

Also credit to GD’s Highlights for the videos. I also posted this to Reddit--I didn't plagiarize!!11!