Early in Friday night's NBA Playoffs Game 6 featuring the Portland Trail Blazers and the Los Angeles Clippers, Blazers forward Al-Farouq Aminu and Clippers guard Austin Rivers both went up for a contested rebound. Aminu secured it at the apex, while he was coming down Rivers came up under Aminu's right arm and ended up catching a flush elbow on his left eyebrow/forehead.

Rivers is up and walking to the locker room. He took a shot to the face and has a nasty -- naaaasty -- cut over his left eye.

Rivers hit the floor and immediately clutched his face, which was visibly cut by the impact. Training staff rushed the floor to assess the injury and stop the immediate bleeding. Rivers walked off the floor under his own volition and is in the visiting locker room in the Moda Center being evaluated now.

Shortly after, reports emerged that Rivers already expected to return to the game after treatment.

Austin Rivers is getting stitches on two different cuts... He is probable to return.

He returned to a monster performance, finishing with 21 points and 8 assists. But the Clippers came up short, as the Blazers beat them to advance to the Western Conference Semifinals. In the postgame celebration, many Blazer players came over to check on him, including CJ McCollum. 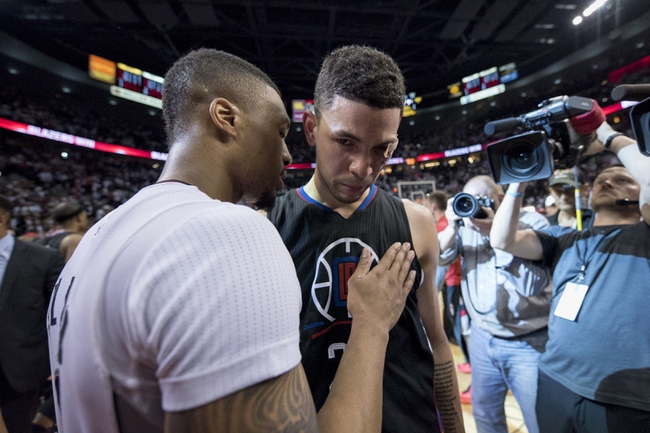