The Wisdom of Damian Lillard

Portland Trail Blazers point guard Damian Lillard has a penchant for philosophical tweets. We look at one of them and explore its profound implications.

Share All sharing options for: The Wisdom of Damian Lillard

You may have noticed Scott Horlbeck's fine piece covering the activities of the Portland Trail Blazers on Social Media this morning. What you may not have noticed is that in between the 4Bars and commercial clips, young superstar Damian Lillard waxes philosophical from time to time on his Twitter account. After enough of those Tweets you start to feel positively educated.

As a matter of fact, we feel so inspired that we're starting a brand new feature on Blazer's Edge: The Wisdom of Damian Lillard. Every so often we're going to lift up one of Dame's thoughtful Tweets and expand on it, going beyond 140 characters to expose the underpinnings and implications behind his wise words.

This profound Tweet provides us with our first installment: 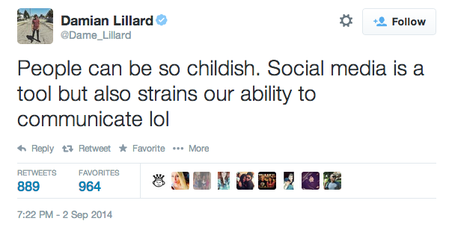 Immediately you notice that Damian has gone all Shaolin Master, walk on rice paper, "confuse the student by using social media to decry social media" here. Do not sleep on this guy! In the process he opens up an important question. We're all familiar with the power of social media to facilitate conversation with millions of people across the globe. Might social media strain or inhibit conversation as well?

I cringe when people say that social media conversation isn't "real".Without even citing its ubiquity we can point to innumerable romantic partnerships formed online, vibrant friendships whose sole remaining form of connection is digital, and spirited debates on any number of subjects that would never come up in "real" life. Social media has its own gravity, the effects of which can be every bit as real as those that stem from offline interactions.

It's fair to say that social media conversation is bounded, the same way offline conversation is (or any form of communication, really). Its limited by its process, two key facets of which differ from in-person discussion:

Face-to-face conversation is almost always a shared experience. Unless you're talking with a boor who never lets the other person get a word in, roles of speaking and listening interchange between the participants. As each person considers and responds to what the other said a conversation grows like yarn being wound up into a ball. By the time the ball is complete, everybody has touched it and everyone can claim partial ownership. The ball rests not with any one person; it lives in the space between. Each participant takes a complete copy as they leave and is free to play with it as they wish.

Therapists and small group leaders will often use a physical totem to represent this phenomenon. They'll introduce a "talking stick" which allows the bearer to speak while everyone else remains still. Once a contribution has been made, the stick passes to somebody else who then has the power to speak and create the conversation.

Social media is more like an art show than a super-sized discussion circle. Each member makes their contribution separately...fashions it internally then puts it on display full-formed, independent of the recipients. Those recipients can react to the submission--praise it, criticize it, shine a different light on it--but at no point does the person reacting own the statement or the process.

Using social media, thousands of people put their contributions on the table simultaneously and then walk around the room seeing what everybody else did (all the while monitoring how people are reacting to their piece). Success is judged less by interactivity, growth, and richness of the experience, more by attention and approval received.

In an online venue you generally want people to ooh and aah at your submission but not to divert or change it. If somebody says, "Your statement made me think of something out of left field," during the course of an in-person conversation it's usually considered an epiphany moment, something to be happy about. If somebody says the same thing online the response is, "Stop hijacking my thread!"

2. People have more control and choice over partners in Social Media conversations than in face-to-face encounters.

Most of us spend our lives drawing circles. We circumscribe one around our core family unit (blood-related or otherwise), another farther out around our group of friends, a third far looser around acquaintances and people we deal with professionally or casually, and strangers remain outside. Seldom are these steadfast or impermeable, but few of us feel safe without some sense of organization and boundary in our social interactions.

Social media appears to broaden those circles, or at least make them more populated. Saying, "I have a thousand Facebook friends" may not mean we've added that many people to our second circle, but they're somewhere in our orbit. We're more social, more popular, than we perceived ourselves to be before.

But quantity doesn't always equal expansion. When we make friends in real life we end up having to tolerate aspects of their personalities that we find less than ideal. Our football watching buddy may have odd politics. Our spouse may exhibit an inordinate fondness for Neil Diamond. When those people enter our circles, the circles themselves become bigger. They stretch to include the possibility of Libertarians or soft-rock crooners even though neither of those may reflect our own sensibilities.

Social media interactions are less about reshaping than filtering. Our set of potential "friends" runs into the hundreds of millions. Most of us start our social media lives duplicating our real-world circles, communicating with people we actually know. When the other hundred million come knocking we categorize them, judging their fitness by how well they match our dispositions. Libertarians and Neil Diamond fans usually get filtered out before we know anything else about them.

Even among our encircled online friends we choose exactly what to respond to and what not. If we ignore someone's utterance in person we're considered a jerk. Online we ignore 9 out of every 10 statements that come our way. Actually responding to someone is considered a great compliment. If you get a "like" or "fave" you did good. If you actually get words in response you must have really tickled someone's fancy.

These two aspects of social media conversation give us great power. We can be exactly the "us" we choose to be without interruption or filter. Anytime, day or night, we can put ourselves on display. We also have the ability to choose and control our exact response to others, giving them strong affirmation or passing by without letting their words touch us. The resulting environment is more egalitarian than we experience in the real world. Famous folks start with a bigger online audience but at any given moment a five-year-old, a high-school athlete, a single mom, or a funny cat can command as much attention as the President of the United States...often more. That's amazing.

The pattern also has failings. You know what we usually call people who say anything they want anytime they want regardless of context or audience, who continue to do so while others are trying to contribute, who claim proprietary ownership of conversations, who snap-judge others and ignore anything that doesn't fit with them, and who value attention above interaction? We call them "childish". In the flesh-and-blood world these behaviors break relationships instead of building them, creating strain on everyone around those who exhibit them.

(By the way, using audible laughter as a conclusion to, and indecipherable replacement for, all manner of social expressions would create even more strain. lol)

As it turns out Damian Lillard is right...and very wise. This doesn't mean we should disparage, let alone do away with, social media and online communication. Rather we need to understand the differences between, and limitations of, online and offline communication. Living in both worlds, we have to monitor ourselves lest one pattern encroach on the other to our detriment.

We can't dismiss the power of social media to inform and redefine real life. I can think of a hundred important causes and concerns I'd know less about were I limited to my flesh and blood orbit. At the same time we can't fall so in love with the power and pattern of online conversation that we lose the ability to engage in productive face-to-face communication. We weren't meant to be exactly who we want to be in every moment, regardless of context. Reducing life's experiences to a thumbs up or thumbs down based on our own, pre-determined tastes impoverishes us. Other people don't exist only to the extent that they agree with us, entertain us, or make us comfortable. The day compatibility replaces compassion is the day civilization crumbles.

So, hey...Damian Lillard is keeping us from Armageddon. Wow! That's some extra-strength wisdom.  When added to his on-court performance preventing the end of the world as we know it ought to be good for at least 3rd Team All-NBA this season, don't you think? I sure do.

That's all the insight we have for now. Be sure to follow Damian at @Dame_Lillard if you don't already, and stay tuned for our next installment of the series.