Two billion dollars is a lot of money for a new NBA television deal. How much will the Trail Blazers get to spend and how will that affect their ability to improve the team?

Share All sharing options for: Why the NBA's New TV Deal with ESPN and TNT Won't Affect the Trail Blazers

There have been whisperings about the league’s impending new TV contract for many months now. In July, Grantland reported some front offices were projecting as much as a 30% increase in the salary cap over the next two years.

Well, Monday marked a great day for speculative capologists everywhere as the first update on contract negotiations was reported. An article published by SportsBusinessDaily.com expects the new contract to increase from $930 million per year to an unprecedented $2+ billion each year.

Getting from two billion to the effect this will have on the Blazers can be tricky considering the complexity of the NBA’s collective bargaining agreement. Luckily, the determination of the salary cap is one of its more straightforward sections, although that’s not saying much.

First, the league and player’s association negotiate and agree on a projection of Basketball Related Income (BRI) for the upcoming season. The salary cap is a formula based on this number. In full, the salary cap is 44.47% of the projected BRI, minus projected benefits for the players, and then divided amongst the thirty teams.

The determination of the BRI is quite complicated. As the name implies, it’s an estimation of all the revenue the league generates as a result of basketball activities. Fortunately, national broadcast rights unequivocally count as part of the BRI so there is no question as to whether this new income will be included.

Last year’s BRI was $4.522 billion so we’re talking about a massive 24% increase. Add in the league's standard assumption that the BRI will increase 4.5% each year and those "30 percent over two years" predictions look almost conservative.

This kind of drastic and uncertain change makes it nearly impossible to plan and the league is reportedly exploring ways to spread the increase over several years. According to Zach Lowe, many executives have already asked if the league would increase the salary cap in 2015 in anticipation of the new TV revenue in 2016. Depending on the amount and mechanism, this could greatly affect the summer of 2015.

Below is a chart projecting the salary cap over the next six years. The league has already released its projection for the 2015-2016 salary cap. From there, I assume 4.5% increases plus the jump in the TV contract. The only difference is that the right hand column "smooths" the increase over three years rather than letting it fall entirely in 2016. Note that the cumulative salary under both scenarios is equal indicating the players would receive similar amounts of total salary under each scenario. 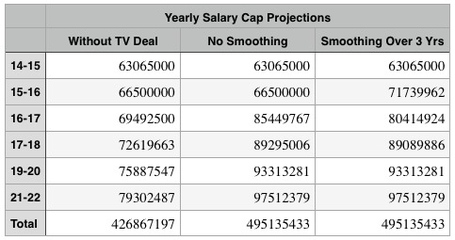 Anyone who follows the Blazers knows the summer of 2015 will be a huge moment for the franchise as two starters and the team’s best player all become free agents. If the league were to increase the cap by more than $5M it could greatly affect the Blazer’s range of options allowing them to either upgrade a position or add another piece to the championship puzzle.

Or so you would think.

As it sits now, the Blazers are projected to have no cap space. Cap holds for Aldridge, Matthews, and Lopez eat away whatever room there might have been. Those holds can be renounced but then you have to find a way to replace whoever you just cut. Assuming Aldridge re-signs (everyone reading this knock on wood right now!), they would need to cut Chris Kaman, every non-rotation player, and one starter in order to clear meaningful cap space (~$8M). To even start sniffing at max-level space (~$15M) you would need to cut a second starter as well.

(I glossed over a lot of detail in that last paragraph. For a thorough treatment, check out BlazerFanSince1970’s analysis or TDarkstar’s review)

If the league smoothed the increase over three years, the new TV contract would add roughly $3.5M to those numbers. We wouldn’t even get the whole $5M increase because Aldridge’s max salary is tied to the cap. If the cap goes up, so does Aldridge’s salary eating into the windfall.

Anybody think we can find an upgrade to Wesley or Robin for $11.5M? Especially considering that the anticipation of the new deal will increase salaries league wide.

Assuming no, the outlook of next summer is largely unchanged. It will be nearly impossible for the Blazers to add a piece or upgrade a position. That leaves us trying to find the best player we can with the MLE and speculating on internal improvement. Sound familiar?

Scenarios begin to diverge as we project further. With smoothing, the Blazers would have a little more caproom in the summer of 2016 as well. They could get $15M under the cap if they let Batum walk. However, you still have the same problem of finding a replacement at roughly the same salary Batum would command.

The best scenario for the Blazers is if the league chooses not to spread out the increase. This would give the team enough space to re-sign Lillard and use both the MLE and BAE in 2016. Or they could renounce Batum and both exceptions clearing up more than $20M in cap space - enough to attract some serious talent. These are the only additional team building tools the new TV deal is likely to bring. However, nearly every team would be saying the same thing and many would have much more to spend. The Blazers would be in a knife fight holding a pistol while other teams carried machine guns and hand grenades.

It’s important to note the vast number of assumptions that go into projections like this. I’ve had to devise new contracts for multiple players, project the growth of the league and estimate the relationship between things like the salary cap and the luxury tax. Everything here should be taken with an entire mountain of salt.

This is especially true considering a few million dollars can make a huge difference in the right circumstances. The difference between an $8M player and a $12M player can be vast. At this point, it looks like the new deal won’t push the Blazers past any of those thresholds but if a few key assumptions broke the right way the whole picture could change. Some sources indicate the new deal could be "well over" $2 billion and an extra half billion or more would transform a lot of this analysis (and a new collective bargaining agreement in 2017 would render it mostly moot).

The one reliable conclusion is that the new revenue will greatly reduce the tax burden Paul Allen has to pay to keep this team together. Without the increased revenue, I project the team being $32M over the tax line in 2018. The TV deal cuts this number in half to a much more reasonable  $16-$18M. This will be true regardless of how the NBA handles the increase and under any conceivable new agreement.

For many teams, the new TV deal will create a whole host of opportunities and speculation around what players their teams will add. For the Blazers, it simply means the new contracts and extensions for our existing players push us less into the luxury tax. If anything, it will make it more likely the Blazers stay together rather than change.

I guess sometimes two billion is nothing more than a really big number.