The new sleeved alternate will be worn during the 2014-15 season and has divided fans around the state of Oregon.

The Portland Trail Blazers had photos of their new "Rip City" sleeved jerseys released on Monday, and the reaction from fans was immediate and raucous. People either hated or loved the new design, and my own intimation was to write at length this week as I bemoaned the downfall of aesthetics for one of the league's best jerseys. Then, I met Mike.

A Beaverton native and local businessman, Mike was a friend of a friend who met us out for a Flemish in SE Portland this week, his own involvement in the team just as legitimate as any sitting at our table. The conversation turned from the MLS game on the TV to the NFL, then back as it always does, to the NBA. I posed a simple question to the group.

"What do you think of the new sleeved jerseys?"

I'd half-written this column earlier in the week and decided to sleep on it, both for clarity and assuredness of my own opinion. Mike was already settled, his answer swift as his eyes met mine and never wavered. He was not ashamed of his response.

"I absolutely love them," he said.

To me, the sleeved jerseys represented an ugly, low-class bastardization of a professional attire. It looked like something you could have screenprinted at a local stitch shop, not the culmination of colors and high-tech fabrics that represented the achievement of reaching the upper echelon of sport in America. It reminded me of the shooting shirts we got in high school, a solid department store attempt at boutique-level quality. 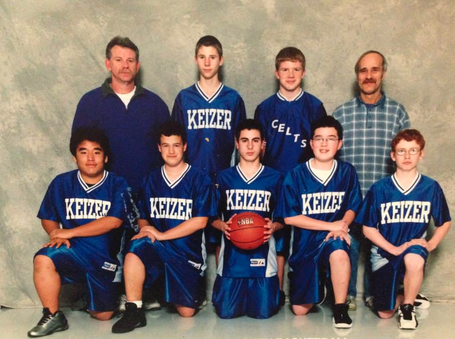 Pictured: All sateen everything.

Mike dismissed this as personal, nostalgic nonsense. To him the jersey was a fresh design, something ultimately more wearable and useable in everyday life. It was more appropriate for most fans, who wear t-shirts under their replica jerseys now anyway. And, as I explained how the league had recently moved their logo from the left shoulder to the back of the neck, Mike saw the sleeved kits as a natural expansion of space for sponsorship.

It's important to know that sleeved jerseys have been a part of basketball's history since at least 1901, when Spaulding's catalogue promoted several kinds of bottoms and both quarter sleeve and sleeveless jersey options. But by the 1920s sleeveless uniforms were commonplace. In football, baseball or soccer, sleeves made sense as players had to manage flexibility with the changing seasons. But in basketball, going sleeveless was more natural for players playing an indoor sport where their attire didn't have to strike a balance with the elements. In short, a move adding sleeves would be against tradition, counterintuitive to performance, but not entirely out of place.

There's no sense in denying that sleeved basketball jerseys are good for the NBA. Despite pushback from fans around the country, Mike was correct in saying sleeved jerseys offer a fashion opportunity for a wider range of customers and increased real estate for future sponsored logos. Groans about commercialization aside, as Adam Silver looks at the NFL he knows the association has far from saturated its potential market space. As the bottom line edges higher and higher and the players union stuffs their pockets with increased basketball related income from jerseys, there will eventually be less and less resistance from players. In the business of sport, business often comes first.

Portland’s new sleeved Rip City jerseys have been met with a resounding opinion over at @Blazersedge pic.twitter.com/esrg507Td5

The NFL will expand to 18 games. The MLB won't shorten their season. The NBA will continue to add sleeves and eventually, sponsorship to their jerseys. When fans are explicit with their support, whether through ticket sales or jersey sales, leagues will supply their demand. Mike showed me that there are enough fans who enjoy the aesthetic of sleeved jerseys, and that support or repulsion is a fundamentally subjective choice.

What is not subjective is the amount of money new jersey sales and sponsorship space will render to the NBA. That is a fundamentally objective fact that looms over our quibbling between colors, graphics and sleeves. Considering those factors, it appears that I'm the one that's wrong, not Mike.

Even I think they are truly, terribly ugly.