Los Angeles Clippers guard Jamal Crawford, a former member of the Blazers, won the award for the second time in his career.

Mike Rice of Blazers Broadcasting was the only person to vote for Williams, who was one of 18 players to draw at least one vote.

Williams, 31, averaged 9.7 points and 4.3 assists while shooting 41.7 percent in 24.8 minutes per game over 74 appearances. He signed with the Blazers as a free-agent last summer.

Here's the NBA's press release. The full voting tally is below.

The Los Angeles Clippers' Jamal Crawford is the winner of the 2013-14 Kia NBA Sixth Man Award as the league's best player in a reserve role, the NBA announced today. Crawford, who came off the bench in 45 of the 69 games in which he appeared, led all NBA reserves in scoring, averaging 18.6 points. Additionally, Crawford accounted for 3.2 apg and 2.3 rpg in 30.3 mpg for a Clippers team that went 57-25 and earned the No. 3 seed in the Western Conference playoffs.

Crawford, who also won the award in 2009-10 while with the Atlanta Hawks, joins Kevin McHale, Ricky Pierce and Detlef Schrempf as two-time winners. Crawford amassed 57 first-place votes and 421 total points from a panel of 125 sportswriters and broadcasters throughout the United States and Canada. Taj Gibson of the Chicago Bulls finished second with 395 points (49 first-place votes) and Manu Ginobili of the San Antonio Spurs finished third with 138 points (nine first-place votes).

Here's the voting tally. Click on the image below to enlarge. 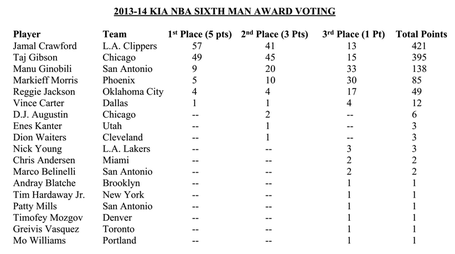