San Antonio Spurs GM R.C. Buford won the award for the first time in his career. Phoenix Suns GM Ryan McDonough, in his first year on the job, finished second.

This goes down as a well-deserved lifetime achievement award for Buford, whose roster didn't see major additions this season. Buford's biggest moves since the Spurs advanced to the 2013 Finals included re-signing Manu Ginobili and Tiago Splitter, signing Marco Belinelli and Jeff Ayres, and trading for Austin Daye. San Antonio finished 62-20 in 2013-14, good for the league's best record.

Olshey's year included trades for Robin Lopez and Thomas Robinson, the free-agent acquisitions of Mo Williams and Dorell Wright, and the selection of CJ McCollum in the 2013 lottery. The Blazers improved from 33 wins in a lottery-bound 2012-13 season to 54 wins and the Western Conference's No. 5 seed in 2013-14.

Here's the full release. The vote tally is included below.

San Antonio Spurs General Manager R.C. Buford is the recipient of the 2013-14 NBA Basketball Executive of the Year award, the NBA announced today.

Buford assembled a roster this season that featured six players averaging double figures in scoring and eight players averaging 20 or more minutes. The Spurs clinched homecourt advantage for the 2014 postseason by virtue of having posted the league's best record at 62-20 (.756). San Antonio was the only team to record 30-plus wins both at home (32-9, .780) and on the road (30-11, .732), and the 2013-14 campaign marked the 15th consecutive season that the Spurs posted 50-plus wins - an NBA record.

Buford becomes the third Spurs Executive to win the award, joining Angelo Drossos (1977-78 season) and Bob Bass (1989-90 season). The Spurs tied the fifth-longest winning streak in NBA history this season, when they peeled off 19 consecutive victories between Feb. 26-April 2.

In his 23rd year with the franchise, Buford has previously held the positions of Assistant Coach, Head Scout, Director of Scouting and Vice President/Assistant General Manager before being tabbed with his current title as Spurs General Manager in July, 2002. Buford also holds the overarching title of President of Sports Franchises for Spurs Sports & Entertainment, presiding over the WNBA's San Antonio Stars, the NBA Development League's Austin Toros and the San Antonio Rampage of the American Hockey League, in addition to the Spurs.

The Spurs added a few notes in a press release they sent out.

"I'm extremely happy for RC Buford to have won this award, which is both absolutely deserved and long overdue," said Spurs Head Coach Gregg Popovich. "His knowledge of the rules, basketball expertise and keen eye for talent have served the Spurs organization well for a very long time. It has been a personal pleasure to be at his side during this period."

Since making the move to the front office in the summer of 1994, Buford has been a central figure in shaping the Spurs roster by with international talent. At the start of the 2013-14 season the Silver and Black had a roster made up of 10 international players, the most in NBA history. The current roster is comprised of nine players born outside of the continental United States, which leads the NBA.

During his tenure as general manager, Buford has played an integral role in keeping the Spurs core of Parker, Ginobili and Tim Duncan together. As a trio the "Big Three" have played 675 games together and have amassed 498 wins, second in NBA history behind the Celtics trio of Larry Bird, Kevin McHale and Robert Parish (540 wins).

Here's how the voting tally broke down. Click on the image to enlarge. 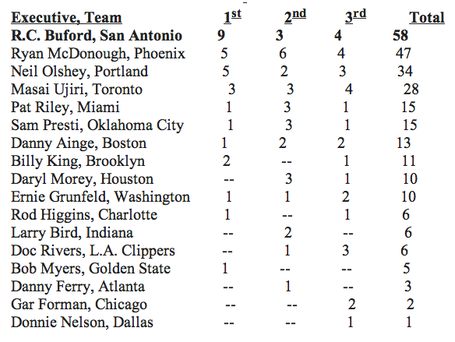 The only Blazers executive to win the award was Bucky Buckwalter in in 1990-91.

In 2013, Olshey did not receive any votes for Executive of the Year. In 2012, his final year with the Los Angeles Clippers, Olshey finished third.