Oklahoma City Thunder forward Kevin Durant won the award for the first time in his career.

Blazers broadcaster Mike Rice cast one of the third-place votes for Aldridge. The full media voting results are online at NBA.com right here.

This year marks the first time Aldridge has received any votes for MVP.

Here's the release from the NBA on the MVP voting. The final tallies are included below.

Kevin Durant of the Oklahoma City Thunder is the winner of the Maurice Podoloff Trophy as the 2013-14 Kia NBA Most Valuable Player, the NBA announced today. It is the first MVP award for Durant, who captured his fourth scoring title in five seasons, joining Wilt Chamberlain, George Gervin and Michael Jordan as the only players to accomplish this feat. Despite teammate Russell Westbrook appearing in only 46 games, Durant guided the Thunder to the NBA's second-best record at 59-23.

Durant totaled 1,232 points, including 119 first-place votes, from a panel of 124 voters that consisted of sportswriters and broadcasters throughout the United States and Canada as well as an NBA.com MVP fan vote, making for 125 total ballots. For the fifth consecutive season, the NBA and Kia Motors America gave fans the opportunity to submit their votes by ranking their top five choices through a dedicated Web page on NBA.com. The fan vote counted as one vote and was compiled with the 124 media votes to determine the winner. Players were awarded 10 points for each first-place vote, seven points for each second-place vote, five for each third-place vote, three for each fourth-place vote and one for each fifth-place vote received.

Durant averaged a career-best 32.0 points to go with 7.4 rebounds and 5.5 assists, also a career high. In capturing his fourth scoring title, he joined Jordan (10), Chamberlain (seven), Gervin (four), and Allen Iverson (four) as the only players in league annals to win at least four scoring titles. He shot .503 from the field, .391 from three-point range, and .873 from the free throw line, leading all players in free throws made (703) and attempted (805). Durant authored two 50-point games, topped the 40-point mark on 14 occasions, and turned in 17 games with at least 30 points and 10 rebounds.

Here's a look at the voting breakdown. Click the chart to enlarge. 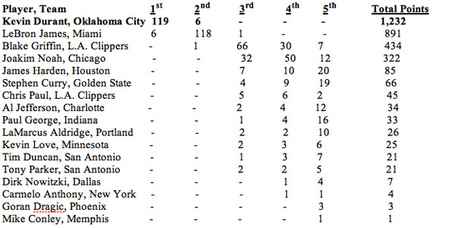