Playbook Breakdown: How Can The Blazers Beat The Spurs?

Portland will need to concentrate on both ends of the floor if they want to upset the No. 1 seeded team in the Western Conference semifinals.

Share All sharing options for: Playbook Breakdown: How Can The Blazers Beat The Spurs?

The Portland Trail Blazers have a difficult task ahead of them as they face the San Antonio Spurs in the second round. San Antonio is a juggernaut come playoff time, and a 119-96 Game 7 domination of the Dallas Mavericks on Sunday proved that they can flip a switch when the pressure is on.

The Blazers will need to be able to focus on four areas over the course of the series in order to be successful. With the league's sixth-most efficient offense, a deep bench and the ability to shut Portland down from long range, the Spurs are the favorites going into Game 1 on Tuesday night.

The Spurs rarely turn the ball over, and Portland isn't good at forcing mistakes. San Antonio was third in the NBA in the regular season in assist-to-turnover ratio. But limiting the Spurs' passing game has proven an effective recipe for success. In the regular season, the Spurs were 3-9 in games where they lost the assist differential to their opponents.

One way to do that is to clog up the passing lanes on the pick-and-roll. San Antonio loves to use this inverted pick-and-roll from the corner. Tony Parker runs to the corner while the wing clears the paint. 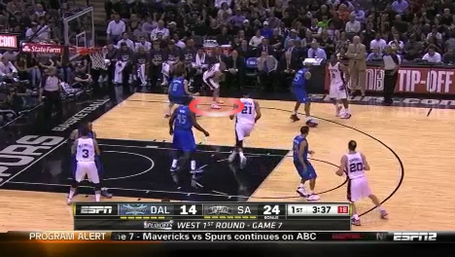 Tim Duncan comes across to set a pick, opening up this area for a midrange jumper. As the post defender jumps to Parker, it leaves Duncan open on the roll on the baseline. 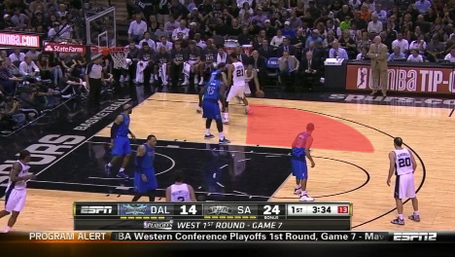 The best way to defend this play, especially with Duncan as the pick man, is to hedge to the baseline against the low passing lane. In this example, DeJuan Blair does exactly that, and picks off Parker's pocket pass.

Now, teams can also get themselves in trouble if they try to trap the Spurs ball handler in the corner on this play. In the example below, the Los Angeles Lakers over-commit to the baseline, and with a quick swing around the arc, the Spurs get an easy three-pointer.

Pressure the Spurs at mid-range

Portland's defense is built to stop the three-pointer and shots at the rim, forcing midrange jumpers. During the regular season, San Antonio was more than happy to take the midrange shots the Blazers gave them. 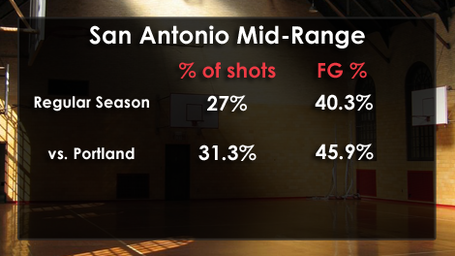 That's because San Antonio game-planned for rhythm jumpers against the Blazers. The Spurs came off their screens, took two dribbles and squared up to the basket. They weren't forced to take contested jumpers, they wanted to take them. The Blazers have to find a way to force San Antonio from being comfortable in that midrange, likely by pushing their bigs out of their soft coverage on the pick to bother the jump shooter.

Slow down the Spurs bench production

With Manu Ginobili coming off the bench, it's inevitable that the Blazers will likely have a negative net total in bench scoring. But stopping the likes of Patty Mills and Marco Belinelli, especially from three, will be paramount.

Limiting Manu will be tricky, but a good bet is to force him to pass out of the pick-and-roll. Collapsing on Ginobili yields worse results than if heady defense puts the onus on him to make a bad decision.

Finally, the biggest issue for the Trail Blazers will be from long range. In their two regular season losses, the Blazers shot a combined 25.6 percent from three. In two wins, they shot 44.4 percent, with eight makes in each victory. 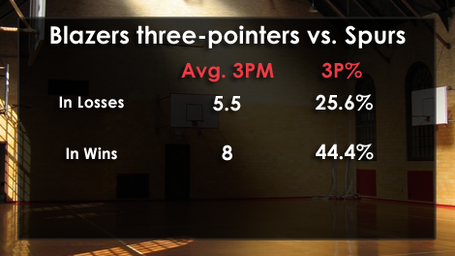 In wins, Portland did a good job attacking two players: Patty Mills and Marco Belinelli. Mills showed himself to be susceptible on the pick-and-roll with Damian Lillard. The Blazers used the high screen play, with Lillard using a flip-flopped pick by Robin Lopez or LaMarcus Aldridge to create a shot for himself.

Against Belinelli, dribble handoffs on the wing, or down picks that turn into flare plays really seemed to confuse him. When he is in the game against Matthews or Batum, look for the Blazer offense to focus in his direction.

Marco Belinelli gets lost chasing Wesley Matthews around a pick.

The Spurs present all kinds of matchup problems for the Blazers, but Portland has a few advantages that will be difficult for San Antonio to react to as well. These are just a few of the details the Blazers will have to concentrate on over the course of the series.

Finding an answer for Tony Parker on offense is going to bother Portland, as is the strong defense of Kawhi Leonard, the matchup with Boris Diaw and the inevitable issue of a playoff-ready Tim Duncan. The factors listed above are just part of the plan for the conference semifinals.

For the Blazers to win, they will need to execute on both sides of the ball against the defending Western Conference champions.