LaMarcus Aldridge: Why A Contract Extension Could Be the Right Move

Why signing a contract extension could be the right financial move for LaMarcus Aldridge.

Share All sharing options for: LaMarcus Aldridge: Why A Contract Extension Could Be the Right Move

There has been much discussion in recent weeks about the possibility of an extension for LaMarcus Aldridge, who has one more year left on his contract.   Right now, Aldridge is scheduled to make $16,006,000 in 2014-15 (although that amount could change slightly due to incentives in his contract either being met or failing to be met).

One of the major topics in this discussion has been that of the financial implications for Aldridge should he sign an extension, over against playing out the season and becoming a free agent in July of 2015.   The rules established by the Collective Bargaining Agreement come into play here, which make for some interesting choices for Aldridge, some of which were discussed in Dave and Sam's recent video.   Essentially, if he wants to remain with the Blazers beyond June of 2015, he has 3 options:

#1) Aldridge can sign an extension before June 30th of this year.   He could sign for up to 2 additional years which would pay him up to $35.70 million for those 2 years. 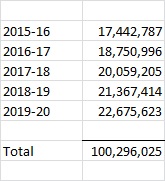 Now, I know that many believe that option #3 is a no-brainer for Aldridge.   More guaranteed money should be the option to take, right?   Perhaps.   Let me suggest a way that Aldridge could possibly earn more salary by choosing to sign an extension, the specifics of which I have yet to read here at BlazersEdge (and obviously, if someone has already suggested this and I've missed it, my apologies for not crediting you).

Here's the strategy:  Aldridge signs an extension and then becomes a free agent later than if he lets his current deal run out.   Why?   Because right now his "maximum contract amount" is limited by the fact that he will have 9 years of experience once his current deal is completed.   The "ceiling" for Aldridge is limited to 30% of the adjusted cap figure, which applies to players with between 6 and 9 years of NBA experience.   However, once a player has 10 or more years of experience, his "ceiling" increases to 35% of the adjusted cap figure.  (For a more detailed explanation of this topic, please refer to Larry Coon's FAQ #16)

You probably see where I'm going with this.   Aldridge's maximum contract ceiling is limited in 2015 if he signs as a free agent.   But after just one more year of play, his ceiling for signing a new deal jumps dramatically.   Might he be better served in going for a shorter deal now to cash in on another deal in a few years?    Let's look at the numbers:

If Aldridge signed a 3 year extension (Option #2 above) and then signed a new contract as a free agent in the summer of 2018, he could conceivably sign for a large raise, because he would have more than 10 years of service and thus qualify for the 35% ceiling.  Under this plan, he could earn up to $101.63 million for the 5 year period ending in 2019-20 (as opposed to the $100.30 million mentioned above). 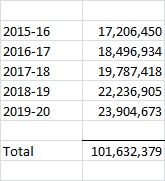 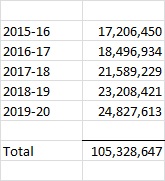 Does this approach carry risks?   Absolutely.   The maximum ceiling amount might not actually increase to the levels listed here.   Age, injuries and/or on-court production could affect his ability to sign for the max when the extension is completed.  But with these risks comes potentially more financial reward - especially if Basketball Related Income continues to rise more than the 3% that I've assumed here (for example, early projections for the 2014-15 cap show an expected jump of about 8%).  All these are factors that Aldridge needs to consider as he mulls his options.   I'm not saying that this is the route that Aldridge and the Blazers should take - I'm simply pointing out that it's an option for him.  And pointing out that, should he take the route of signing an extension, there might be some possible financial justification for him doing so.