The No. 10 overall pick from the 2013 NBA Draft saw the floor for less than 500 minutes of play this season.

Fans got a glimpse of rookie C.J. McCollum earlier in the season, but as the playoffs grew near coach Terry Stotts solidified his lineup and kept the Lehigh product glued to the bench down the stretch. The lottery pick saw action in just 38 regular season games this year, and many fans in Portland are wondering why a top pick with clear offensive talents wasn't allowed playing time to flourish.

Let's take a look at some of the things he needs to work on over the summer.

Coming off the pick, McCollum did two things that killed him. First, as he drove, longer defenders were able to bat at his dribble. He has a tendency to dip his shoulder at the same time he raises the ball behind him on the hesitation, effectively showing the ball high to the defense.

Andrei Kirilenko is able to pick McCollum clean as he dips his shoulder.

McCollum also had trouble reading the defense off the roll. He often waited too long to decide whether to penetrate or dish, leading to turnovers near the basket. In fact, McCollum nearly turned the ball over at a greater rate (22%) than he scored (23.7%) in pick-and-roll plays last season.

McCollum can't decide whether to penetrate or hit the backdoor cutter, resulting in a turnover.

As we've seen with Damian Lillard, being able to shoot directly off the pick and finishing at the rim are a deadly combination. Portland badly needs ball handlers in their second rotation.

This is partly due to the two-guard lineup Stotts ran out in the second unit. However, a quarter of McCollum's plays were pick-and-rolls, where he should have either been able to score or flip to a teammate for an assist at a much higher rate than 8.7 percent. Since he barely scored more than he turned the ball over in the pick-and-roll, his lack of passes leading to scoring was a big reason to bench him.

McCollum seemed to get easily sucked or trapped up near a ball handler as he tried to push them baseline. Instead of forcing opponents into help, he blocked an avenue away from one angle, then left his own help defender to take over from there.

In this example, McCollum's feet are angled to take away a pick back to the top of the key to force Nick Young baseline. 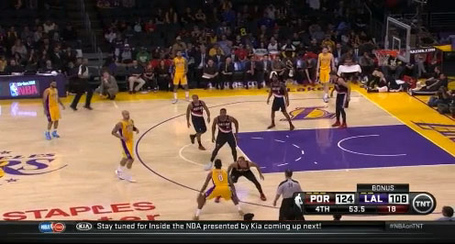 McCollum's feet are perpendicular to the baseline, a perfect position to force Young baseline.

As Young fakes back toward the arc, McCollum jumps it even further, opening up the baseline for a drive. 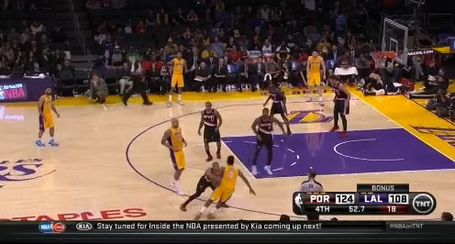 McCollum jumps too high as Young fakes toward the coming pick.

But because he has jumped so far out of position, the play became up to Thomas Robinson to cover Young all by himself.

There's a subtle difference between taking away an angle and giving up an entire lane. McCollum got better at it as the season wore on, but his 109 defensive rating didn't put him anywhere near useful enough on defense last year.

McCollum was inexplicably terrible at free throws this season. His four-year average at Lehigh was 82.5 percent, which would have put him right along with the rest of the starters. But last year, McCollum shot just 67.6 percent from the line on 32 attempts, ninth-most on the team. This one should be easy to correct. You've got to make your free throws.

McCollum is a true talent, there's no doubt about it. Looking at his per-36 minute production from his rookie season, there's no wonder Neil Olshey thought he was worth taking with the No. 10 overall pick. He scored reasonably well, shot an average percentage from the field and was a better three-point shooter, percentage-wise, than Lillard was as a rookie.

His dribble-drive is sneaky good, even if it does have some holes that above-average defenders in the NBA will be able to time. If he keeps his dribble low, his first step is explosive enough to go around a lot of arc defenders. That's good, too, since the Blazers' backup rotation needs another penetrator to draw wing defenders off their shooters.

Like all rookies, there is much to work on in the offseason. If McCollum can improve on a few crucial points of his game, it's reasonable to think fans in Portland will see more of him come 2014-2015.