In addition to the 10 players who were selected to the 2014 All-Rookie First and Second Teams, 19 players received at least one vote.

Here's how the teams shook out and how the voting broke down. 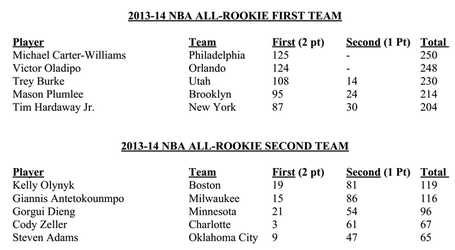 McCollum, 22, was the No. 10 pick in the 2013 NBA draft after spending four years at Lehigh. He missed the opening portion of the 2013-14 season after suffering a foot injury back in October.

McCollum averaged 5.3 points and 1.3 rebounds in 12.5 minutes per game over 38 appearances after returning to the court in January.