The Portland Trail Blazers have announced plans to rename "Winning Way" -- a street near the Moda Center -- to "Ramsay Way" in honor of Hall of Fame coach Dr. Jack Ramsay.

The Portland Trail Blazers have announced plans to rename "Winning Way" -- a street near the Moda Center -- to "Ramsay Way" in honor of Hall of Fame coach Dr. Jack Ramsay, who passed away at age 89 earlier this weekafter an extended battle with cancer.

The name change would complement "Drexler Drive," which obviously recognizes Hall of Fame guard Clyde Drexler, who led the Blazers to the 1990 and 1992 Finals.

To get a sense for where "Ramsay Way" would be located, check out the map below. Click to enlarge. 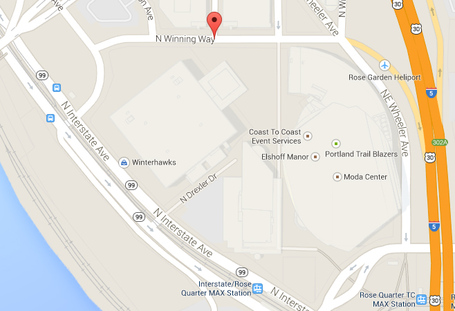 Ramsay guided the Blazers to the organization's only title in franchise history in 1977. Portland is also honoring him with "Dr. Jack" jersey patches during the playoffs and recently named the "Dr. Jack's" Rose Quarter eatery in his honor.

The Blazers announced the street name plans and further tributes in a press release.

As a permanent salute to the memory of legendary Portland Trail Blazers Coach Dr. Jack Ramsay, the Trail Blazers and City of Portland Commissioner Steve Novick are partnering in a resolution to rename a street in the Rose Quarter in Ramsay's honor. North Winning Way, a feeder street just north of the Moda Center and Veterans Memorial Coliseum, would be renamed "Ramsay Way" in honor of Ramsay, who passed away earlier this week at age 89. Commissioner Novick plans to introduce the resolution at the next Portland City Council meeting on Wednesday, May 7.

"Dr. Jack is a permanent icon in the storied history of the Trail Blazers and indeed the NBA," said Trail Blazers President & CEO Chris McGowan. "Renaming an important street in the Rose Quarter would also give him a place of prominence in the cityscape of Portland, a city he truly loved. The proximity of Winning Way to Veterans Memorial Coliseum, where Dr. Jack and the Trail Blazers won the NBA Championship in 1977, makes that street the logical choice. We are proud to partner with Commissioner Novick to bring this resolution before the City Council."

"Portland Mayor Charlie Hales and I believe this is a perfect way to salute Jack Ramsay," Commissioner Novick said. "I have owed Dr. Jack a huge debt of gratitude since June 5, 1977, when, as a kid in Cottage Grove, I watched Oregon's team claim the NBA title. It is an honor to have a chance to pay him a proper tribute."

Wearing a commemorative plaid "Dr. Jack 77" patch on their uniforms in honor of Ramsay for the remainder of the NBA Playoffs, the Trail Blazers resume their Western Conference opening series versus the Houston Rockets with Game 6 tomorrow night at the Moda Center. Fans will be asked to observe a traditional moment of silence in recognition of Ramsay during pregame activities; followed later during a timeout by a heart-felt video montage of Ramsay's career highlights. Also tomorrow, and throughout all remaining home playoff games, an arena spotlight will shine toward the Moda Center rafters on the Number 77 Trail Blazers jersey retired there in Ramsay's honor in 1993.

Other activities planned to honor Ramsay include:

· Donation of proceeds from Friday's ticket sales for the 5050 Rip City Raffle presented by the Safeway Foundation, matched by the Trail Blazers make it better Foundation, to a deserving local charity chosen by the Ramsay Family; and

· A lasting tribute to Ramsay through the establishment of the Spirit of Rip City Award to be given annually to a coach, educator, administrator or community activist whose focus, determination and never-give-up spirit, coaching hallmarks of Ramsay, makes a meaningful contribution to the greater Portland community.

In 1992, Ramsay was inducted into the Naismith Memorial Basketball Hall of Fame. Ramsay stepped into the broadcast booth in 1990 as a television analyst for the Miami Heat, but his most extensive and best-known span as a broadcaster came as an NBA analyst for ESPN Radio from 1996-2013.