Would a shortened rotation produce better defense for the Portland Trail Blazers when the postseason hits?

Rob Mahoney of SI.com wonders whether Portland Trail Blazers coach Terry Stotts should cut his rotation for the playoffs with an eye towards improving the team's defense.

Portland is 3-13 against the West's other playoff contenders since the turn of the calendar year. More efficient offenses have outscored the Blazers since their scoring dip. Stingy defenses have channeled the Blazers toward less desirable shots and controlled the game in the process. And those teams - like Houston - with the personnel and commitment to make Portland beat them one-on-one have limited even what the Blazers do best.

One element that could work in Portland's favor: The postseason should give the Blazers an opportunity to slim down their rotation a bit, heightening the influence of their starting lineup while weaning dependence from their fading bench. If Stotts could come to rely on a stable seven or eight players, there's a solid chance that Portland could out-perform its defensive marks to date and narrow the gap against playoff competition.

The full analysis -- which compares and contrasts the Blazers and the Memphis Grizzlies -- is right here.

"Can Portland find a way to slow Houston?" will be the series' leading storyline.

The prospect of Joel Freeland's return is big. The Blazers have operated much more effectively on both sides of the ball with Freeland instead of Robinson, and a simple swap in of Freeland (assuming he's moving well enough to do "Freeland things") and a swap out of Robinson (whose defensive rating is among the worst on the team) will make a difference.

The starting lineup's ability to vastly outperform reserve-heavy lineups has been a running theme for Portland all season (and last season too). Here's how it stands through Monday.

When you drill down to the player level, it's just more of the same. There's little question who this team should live and die by when you look at the drastic drop from the starting five to everyone else. 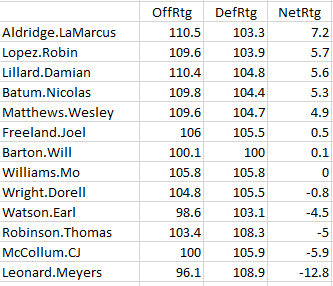 Portland's starters have logged 1,307 minutes together this season. That's the second-most in the NBA, trailing only the Indiana Pacers' starting five (1,432). The Blazers' solid health, minus a few absences for LaMarcus Aldridge, has aided that fact, as has the lack of any midseason trades or shake-ups.

To put this into context, there are only seven total lineups in the NBA that have played more than 600 minutes together this season and there are only three that have played more than 800 minutes together. So the Pacers and Blazers are way out in the stratosphere. The Rockets' most-used lineup has logged 592 minutes together, less than half of Portland's total, in part because of injuries to Patrick Beverley and Dwight Howard. If there's an edge to be found for Portland it would seem to be in continuity, chemistry and Beverley's health.

Let's quickly summarize the relevant circumstances. You have a coach who is making his first playoff appearance since 2006 and has never won a playoff series. You have a team making its first playoff appearance since 2011 for an organization hasn't won a playoff series since 2000. You have a starting five with good chemistry that has produced outstanding numbers all season, despite logging huge minutes. You have a starting five that is currently in good health. You have a few capable reserves, but way more questions than answers. You (likely) have the prospect of a winnable playoff series against a Rockets team that will be favored, but not overwhelmingly so. You have a situation in which winning a series would be a major accomplishment, and any success past that is probably unrealistic this year.

That sure looks like a table that is perfectly set for a big-time squeeze. Personally, I would have a hard time giving meaningful minutes to Robinson, Will Barton or any of the other bench youngsters. Mo Williams would have a clear role, Dorell Wright would get minutes for small ball match-up purposes and to allow Nicolas Batum and Wesley Matthews a few sips of Gatorade, and Freeland would be the third big, assuming he is close to capable of contributing.

Foul trouble will likely open up spot roles for others at various points in the series, as Houston ranks No. 1 by a lot in free throw attempts. But, as a general philosophy approaching a single seven-game series against the Rockets, I would absolutely run the starters all the way deep, deep, deep, deep down into the ground.

Aldridge, Batum and Matthews offered reflections on Sunday on what it means to be back in the playoffs after a two-year absence. I would enter the series planning to reward their patience -- and their play this season -- with 40+ minutes of playing time for Aldridge and Batum, and a sharply increased role for Matthews too.