The Houston Rockets defeated the Portland Trail Blazers, 121-116, in overtime at the Moda Center on Friday, taking Game 3 of a first-round playoff series. Portland now leads the series 2-1.

The Houston Rockets defeated the Portland Trail Blazers, 121-116, in overtime at the Moda Center on Friday, taking Game 3 of a first-round playoff series. Portland now leads the series 2-1.

Professional basketball is a star-driven business, the NBA is a star-driven league, the basketball media/technology complex is a star-driven enterprise, Rockets/Blazers has been a star-driven series, the battlefield of Game 3 was defined by star-driven adjustments, and the game's winning play began as a star-driven affair. Within this sprawling monarchical context -- a world where the best player refers to himself as "King" -- there will always be those traditionalists and idealists who see basketball as a democratic affair, a sport that matches the American bootstrap ideal that always pops up in State of the Union addresses, the notion that anyone with talent, hard work and a little bit of luck can achieve his or her dreams.

Game 3 goes out to those traditionalists and idealists, as it was decided by the absolute unlikeliest of unlikely heroes, a man who saved his own team's stars and delivered the killshot directly over the top of an opposing star. Rockets guard Troy Daniels, 22, went undrafted out of VCU, he spent most of his rookie season in the D-League, he didn't make his NBA debut until March 5, he played a grand total of 75 minutes this season, he didn't find out that he would be on Houston's playoff roster until days before the postseason began, and he didn't play a second in Games 1 and 2.

Houston's trade for James Harden led to years of debates, their signing of Dwight Howard came after years of "Dwightmare" rumors, and their late-season addition of Daniels went uncovered by most media outlets, lucky to draw a footnote here or a paragraph there. Daniels is on the books for less than one percent of Howard's $20.5 million salary and a similarly microscopic percentage of Harden's. Daniels isn't nicknamed after a superhero and he doesn't sport a signature facial hair combination; he has a Wikipedia page, but no national advertising campaigns.

"We knew he was a shooter," said Blazers coach Terry Stotts, whose staff has diligently prepared his team for this series. "We don't know what else he could do, but we knew he could shoot."

David, ancient Greek philosophers, Thomas Jefferson and AP US History teachers have a new hardwood hero, a man whose coach, Kevin McHale, simply said "Be ready" before the game and who practically apologized afterwards for not giving Daniels more time to prepare for the postseason stage.

"I told him, 'Young fella, go out there and fight your butt off. I feel bad you weren't with us longer to get more comfortable, but you have to get as comfortable as you can possibly get right now,'" McHale said afterwards. "And he did."

The score was knotted at 116 with less than 30 seconds to play in overtime. McHale had turned to Daniels in regulation because Houston's floor had been cramped in the first two games: Howard could use more space to operate and a struggling Harden needed all the help he could get. Daniels delivered two three-pointers in regulation, which surely inspired some confidence, but his number was called in overtime because Chandler Parsons fouled out with more than three minutes remaining.

Houston's initial action put Harden and Howard into a pick-and-roll. Howard set screen after screen to no avail, and Harden seemed to freeze up in indecision under ball pressure from Nicolas Batum. Howard could only watch as Harden lost his grip on the ball and his balance; Harden could only tumble to the court and watch Mo Williams make a play for the loose ball. Jeremy Lin sensed the unfolding disaster and careened into the action, knocking the ball loose and hopping on it in one motion. Lin -- an undrafted, D-League-trained, rags-to-riches story himself -- then drove hard, but a bit wildly, into multiple defenders. At the last moment, he flipped a pass over the top of Aldridge and back towards the left angle, where Daniels was spotting up all alone.

The shot clock was under five seconds and Houston was unlikely to find a better look than that. This was the quintessential "count down the seconds out loud while playing by yourself" moment that shooters the world over start reciting in Kindergarten. Daniels set his feet and hit the shot, unaffected by Aldridge's close-out attempt.

"We thought Mo would get fouled, we thought he got bumped a little bit," said Aldridge, who finished with 23 points (on 8-for-22 shooting), 10 rebounds and three assists. "We were trying to watch him grab the ball, he lost it. Jeremy Lin drove to the basket, he didn't see anybody, all of a sudden he just saw [Daniels] at the last second. He's a shooter, but you really can't scheme for that. It was a broken play that ended up great for them."

"The D-League prepared me for this moment," said Daniels, who finished with nine points (on 3-for-6 shooting) and three rebounds. "I found myself open. Jeremy found me and I hit the shot.  It was a shot that I can hit. ... No hesitation. When you're a shooter, you can't hesitate. If I had hesitated, we probably would have lost the game."

The crowd of reporters around his locker was four or five rows deep in a semicircle; Parsons belly-laughed as he confronted the mob after exiting the shower. Minutes later, Daniels would find himself facing a national television audience and a wall of reporters in a press conference. Finally, some nerves, and more than just a hint of them. 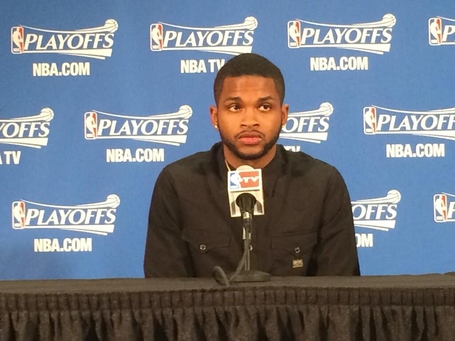 "Three or four weeks ago I was looking at these guys on TV," he said. "Now they're teammates. It's a dream come true. I never thought I would be in this position."

There aren't many NBA stars who need to take a long look in the mirror quite like Harden, and that's not a subliminal crack at his patented beard. Harden's inefficient shooting, loose ball-handling and piss-poor defense were major factors in Houston's 0-2 deficit; his standing as a fantastic player, one of the league's best guards, remains overshadowed by how much better he can become. Following Game 2, a struggling Harden responded to challenges from a reporter by calling the veteran media member a "Weirdo," a situation that should simply never happen for someone with his talent.

But even Harden -- symbolically and literally sharing the podium stage with Daniels -- understood the moral of Friday's story. He had taken 35 shots, which tied for the second-most attempts in a playoff game over the last decade, and yet he was bailed out by a man who entered Friday's action with 31 career attempts to his name.

"Just a couple weeks ago, [Daniels] was in the D-League," Harden said. "Now he saved our season."

That was no hyperbole. Had the Rockets lost, they would have been facing an 0-3 deficit that no NBA team has ever climbed out of in a seven-game series. Instead, Houston can tie the series and regain homecourt advantage with a victory on Sunday.

"The pressure is on them," Harden claimed, after posting a game-high 37 points (on 13-for-35 shooting), nine rebounds and six assists.

The Blazers did not look like a team that had just endured a gruesome gut punch. Aldridge wore an annoyed look that said, "Did that really just happen?" but there was very little dwelling and few, if any, expressions of regret in the locker room afterwards. The same level-headed steadiness that has seen Portland dig out of deficits in three straight game was on display in all corners, as if Damian Lillard had given a personality transplant to all of his teammates.

It was Aldridge, speaking for the pack, who coolly dismissed Harden's "pressure" notion.

"We're still in control," he said. "The pressure is still on them. They lost two at home. They're trying to come here and take two. They came out and played as they should. They played like they were desperate, like they needed a win, like they didn't want their season to end. We probably didn't set the tone as well as we should have. I know we'll do better next game."

That sounded less like frustration or disappointment, and more like a star eager to restore order to a universe that had been ripped out of his possession.

Game 3 at the Moda Center pic.twitter.com/LArLb2KULb

It was a hard-fought game, a little bit different than the previous two. It was a game that could have gone either way. Ultimately they made some shots in the end. We didn't shoot the ball necessarily well in overtime. None of them are going to be easy. It's part of the playoffs.

We knew he was a shooter. We don't know what else he could do, but we knew he could shoot.

On L.A.'s shot -- Beverley was denying Damian the ball. To be honest, it was an open top of the key jump shot that he can make. It wasn't necessarily the play we had designed but it wasn't necessarily a bad shot. Nic's three at the end, a clean look like that, he was 4-for-8 going into that, I thought that was good execution. Mo set a good screen, Nic made a good read and had a good look.

Much between these teams?

I think we all knew we were very evenly matched, similar in styles. I think these are the games we've got to expect. The extra possessions are going to matter in these games, even though it's a relatively high-scoring game. The extra possessions matter. They did a good job on the offensive rebounds and got second-chance points. We did a good job limiting their easy baskets in transition. It's going to be a hard-fought series. They came out and kind of took it to us early. After that it was just a game that went back and forth.

Any of the final offensive plays that will keep you awake tonight?

I don't know about keeping me up. I thought we had some good looks down the stretch. Lin, Harden and Daniels made their shots and we didn't. The possession where Mo had the ball, we could have been running the other way with it. Instead, Daniels hits a three. A bounce of the ball here or there makes the difference.

He had it. He lost his balance. I don't know if he got tripped or not. We didn't come up with it.