Portland Trail Blazers center Robin Lopez and All-Star forward LaMarcus Aldridge were both among the players to receive votes for the 2014 Most Improved Player award.

Portland Trail Blazers center Robin Lopez and All-Star forward LaMarcus Aldridge were both among the 31 players to receive votes for the 2014 Most Improved Player award.

Most Improved Player award voting is determined by a panel of 126 sportswriters and broadcasters. Blazers radio broadcaster Brian Wheeler cast the second-place vote for Lopez and Blazers television color commentator Mike Rice cast one of the third-place votes for Lopez. You can review the ballots, which are now made public, right here.

Phoenix's Goran Dragic, who helped lead the Suns to a 23-win improvement while establishing career highs in scoring and field goal percentage, is the winner of the 2013-14 Kia NBA Most Improved Player Award, the NBA announced today. The annual award is presented to a player who has made a significant improvement from the previous season.

Dragic, who entered the 2013-14 campaign with a career scoring average of 9.5 points, averaged a career-best 20.3 points to go with 5.9 assists and 3.2 rebounds, as the Suns finished with a record of 48-34, one game behind the Dallas Mavericks, who claimed the final playoff spot in the Western Conference. He shot a career-best .505 from the field, including a .408 mark from behind the three-point arc. He was the only player in the NBA to shoot at least 50 percent from the field and 40 percent from three-point range. Dragic started 75 of the 76 games he appeared in, and helped keep the Suns in playoff contention, despite the extended absence of teammate Eric Bledsoe, who was limited to 43 games this season.

Here's how the full tally broke down. 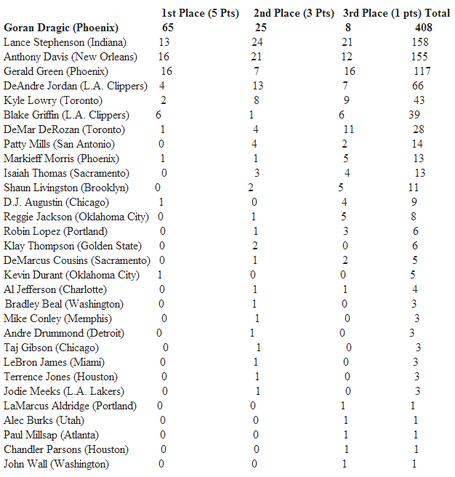 Blazers coach Terry Stotts finished sixth in the Coach of the Year voting.