The Portland Trail Blazers came back from 30 points down to the Dallas Mavericks, leading to a game that came down to the final minute. But Portland couldn't make a shot in the final four minutes, letting Dallas sneak away with a victory they desperately needed.

Share All sharing options for: Final: Mavs Burn the Blazers, 103-98

The Blazers were led by LaMarcus Aldridge, Wesley Matthews, and Thomas Robinson off the bench.

First Half: Complete disaster. Much like the recent Laker game, the Blazers simply didn't show up to play. The Mavericks took advantage while the Blazers scored 4 points in the first 8 minutes, sprinting to an easy 18 point lead. As the second quarter started, Portland continued to simply not care about this game, allowing Dallas to easily open a 40-10 lead, as they meekly went to the bench during a timeout.

Thomas Robinson, returning from injury, checked into the game and brought some energy sorely lacking from the starters. In the process, Portland finally scored a few points, but were still staring at Dallas off on the horizon at halftime.

This is going to be the comeback of all comebacks!
by jenstcy

Third Quarter: In one of the most unexpected stretches you'll ever see in a basketball game, the Dallas Mavericks completely melted down on the court. the Blazers outscored the Mavericks by 19 points in 8 minutes, capped by an Aldridge layup to take the lead with three minutes left in the quarter. The lead reached 4 before Dirk Nowitzki took control and put Dallas ahead again.

Fourth Quarter: Portland took control to open the fourth, as a Mo Williams jumper put them ahead by 7. But Dallas again got the Blazers in foul trouble, and the Mavs pulled ahead with a three point with 7 minutes left. As Robinson fouled out, the starters returned. From there, the teams played back and forth ball, with Dallas desperately trying to save a victory they thought was in the bag. Lillard airmailed a three-pointer from Austin to give the Blazers a 4 point lead with 5 minutes left, followed by an alley-oop pass from Mo to Aldridge for a dunk and a 6 point lead! Dallas needed a timeout.

Dallas made a push with 4 minutes left, as Devin Harris pulled them within 4, and Vince Carter cut it to 2 with 2:30 left. Portland couldn't get their layups to fall, and with 1:45 left, Monta Ellis stripped Lillard to tie the game with a layup. Aldridge missed a jumper, and that led to a wild sequence of blocked shots at both ends, leading to Portland's ball with under a minute left. They went to Aldridge again, who missed two shots at the hoop. At the other end, Harris hit a layup with a foul to give Dallas a three-point lead with 24 seconds left. Portland had a chance to tie, but Aldridge threw the ball away with an open Lillard under the basket. Dallas was fouled and missed both free throws... and Portland didn't get the rebound, sealing one of the toughest Blazer losses of the season.

(Here's the final game flow chart -- via ESPN.com -- which is one of the craziest you will ever see. Click to enlarge it. -- Ben) 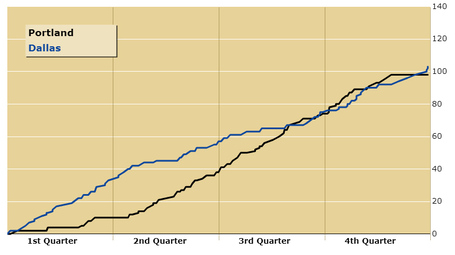 The Blazers fly to Houston Sunday for an afternoon game with the Rockets. In the meantime, stay tuned for Dave's analysis later tonight.

Gameday Thread Comments of the Night:

Thanks to everyone who participated in tonight's Gameday Thread! As always, here are the most popular comments, based on the number of Rec's from their fellow fans: