The Portland Trail Blazers defeated the Atlanta Hawks, 102-78, at the Moda Center on Wednesday night, improving their record to 42-19.

It's not every day that defending three-pointers is headline-worthy, so I'm going to try to take full advantage of this opportunity. Surely you know by now: the Blazers succeeded in ending Hawks forward Kyle Korver's streak of 127 consecutive games with at least one three-pointer, a run that dated all the way back to Nov. 2, 2012.

Korver entered Wednesday's game shooting a league-best 48.4 percent from deep, and holding him without a trey is a nice feather in the cap, no doubt about it. LaMarcus Aldridge said afterwards that he could hear both Wesley Matthews and Nicolas Batum talking about ending Korver's streak during the game, and the effort expended by Portland's wings while they defended Korver left no mistake that it was a point of emphasis.

"I thought Wes took it personal," Aldridge told Blazersedge. "When Nic had [Korver], he took it personal. I heard those two guys talking about it. 'Don't give him one.'"

That energy was especially evident in the third quarter, when Matthews blew up one attempted pass to Korver, forcing a turnover, while also chasing him madly around screens and carefully tracking him in transition.

"The way Wes guarded him, that was pretty big, they were together," said Batum, who posted 14 points (on 5-for-9 shooting) and a career-high 18 rebounds. "Wes was like his boyfriend. They were hugging each other, everywhere you go, I go. He did a great job."

Matthews, who played with Korver on the 2009-10 Utah Jazz, understood that he needed to make life difficult for his former teammate, especially when the Hawks were without both Al Horford and Paul Millsap, among other injured players.

"Just [trying to] make it uncomfortable for him," Matthews said after finishing with 10 points (on 3-for-8 shooting) and holding Korver to five points (on 1-for-9 shooting). "He likes space. I had the pleasure to be on the other side when he was on my team in Utah. When he gets space, he can light it up on any given night. Just trying to make sure it wasn't tonight. ... He was going to get a lot of movement, a lot of screens. I just did my best to take them out of that. ... I was thinking 'Don't let him touch the ball.' I was mad that he touched it as many times as he did."

Focusing only on the Korver-stopping, though, would be doing a disservice to what has been a very unique season for the Blazers when it comes to the long ball. On the year, Portland ranks No. 1 in three-pointers made with 577 while also ranking No. 1 in the league with just 382 three-pointers conceded.

That gives Portland a three-pointers differential (made threes minus opponent's made threes) of +195 so far on the season, which ranks No. 1 in the league by a wide margin. The Phoenix Suns are No. 2 at 171. In fact, only four teams (the Blazers, Suns, Warriors and Lakers) have a differential of +100 or greater!

Here's a visual look at the league's teams lined up by three-point differential this year. Click on the image to enlarge it. 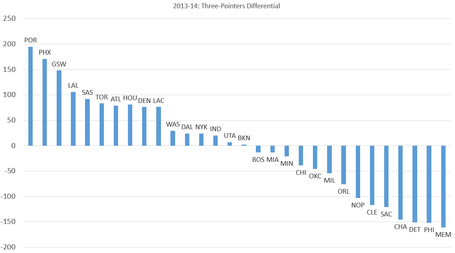 What does this mean? Well, on average, Portland is making 3.2 more three-pointers and generating 9.6 more points per game from beyond the arc compared to its opponents this season. That's a huge disparity and it shows in Portland's record. The Blazers have won 78.3 percent of their games when they've hit more threes than their opponents (even if only by one shot), while they have won just 38.5 percent of the time if their opponents hit more threes than they do. Here's a full breakdown.

For this club, the "key to the game" on virtually any night can be whether Portland wins the three-point battle. Against the Hawks, the Blazers was +9 on threes (13-4) as they coasted to an easy blowout victory.

Right now you might be thinking: "Duh, threes are worth more points than any other shot so it's obviously a big deal to make more of them." That is true. But it can't be stressed enough how many more three-pointers Portland is hitting compared to its opponents this season. The following chart is a visualization of Portland's three-point differential year-by-year since the arc was added in 1980. Click the image to enlarge the chart. 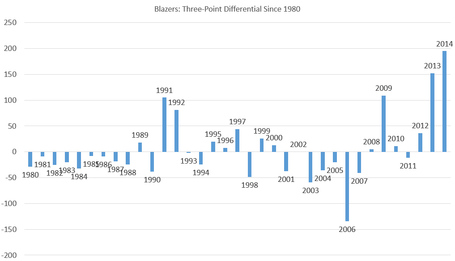 The chart shows a few things. First, the larger swings in differentials over the last decade hint that the three-point ball has become a bigger deal in recent years. (We covered the rise of the three earlier in the season). Second, that the Stotts Era Blazers are blowing away previous Blazers squads when it comes to winning the three-point battle. Keep in mind, the 2013-14 Blazers already enjoy the largest three-pointer differential in franchise history with 21 games still left to play, as they have surpassed last year's team, which ranks second. If the Blazers continue out-shooting their opponents from deep at the same rate for the rest of the year, they will finish with a +262 three-pointers differential, which would be literally off the chart above (the highest horizontal line show is at +250).

Hopefully by this point you're convinced that Portland's ability to stroke the three while also defending the three is pretty unique, at the very least. How important is this, really? After all, both the Oklahoma City Thunder and Miami Heat are currently allowing more three-pointers than they've made, and they are arguably the top two favorites to win the title this season. Clearly, handily winning the three-point line isn't a prerequisite to winning a championship. 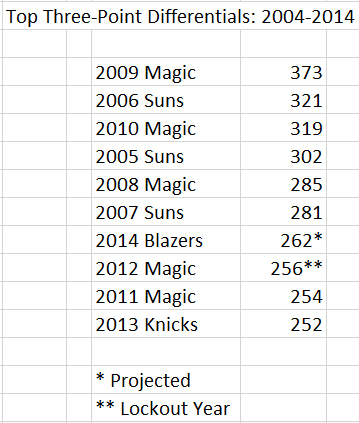 As you can see, the only teams over the last 10 years that have outgunned their opponents from beyond the arc quite like the Blazers were the Stan Van Gundy Magic teams and the Mike D'Antoni "Seven Seconds Or Less" Suns. Both of those franchises rode their three-point shooting to meaningful playoff success (Orlando made it to the 2009 Finals and 2010 Eastern Conference finals while Phoenix made it to the 2005 and 2006 Western Conference finals).

That the Van Gundy and D'Antoni teams appear on this list year after year underscores how a large three-pointer differential is a systemic creation. A team can't just "accidentally" find itself near the top of this list. Offensively, you need to possess a lot of shooters who all have the green light. Defensively, you have to be committed to guarding the three-point line in the halfcourt, in transition and at all times in between.

For Portland, still a below-average defensive team overall, their strong three-point differential is in part created by how thoroughly they dare teams to shoot mid-range jumpers. Shots have to come from somewhere and there's no question whatsoever how the Blazers' priority order shapes up.

"Our first goal is to protect the paint," Matthews told Blazersedge. "We gave up a lot of shots at the rim and a lot of points in the paint so that's a big point of emphasis this year. We don't want to do that. But at the same time, we don't want to give away threes. Threes are what kill you in this league now, everybody can shoot them. That's what we're doing. We're collapsing, we're playing the pick-and-roll coverage different, we're covering with two people rather than stunting and rotating and all that stuff, so that allows us to stay home on shooters."

There's no doubt that the Blazers' three-point defense will face tougher challenges in the playoffs, where most of the crappy offenses are at home watching, where their opponents' ball movement and decision-making generally improve, and where the intensity level kicks way up.

Still, at minimum the takeaway is that Portland has been the NBA's unquestioned King Of The Arc this year. At maximum, one might surmise that putting up such strong three-point numbers on both offense and defense reflects the potential for a nice window of playoff runs. Caution in jumping to that conclusion is warranted, though, as last year's New York Knicks excelled by this measure while this year's squad is a lottery-bound joke.

Whether you prefer the "good to know, time to keep it moving" approach or the "prepare for a half-decade of title contention!" read, we should take a moment to tip our collective hat to Korver for his impressive run. The Blazers might want to thank him, too, for helping to bring their three-point defense to the top of the conversation.

This was a nice bounceback win, especially going back out on the road. After the Lakers game and the disappointment of how we played there, it was a good defensive effort, how we shared the ball. Just all-around good game for us in a lot of ways.

There was a lot to like. We rebounded the ball well, we took away transition. We switched their pick-and-rolls, [LaMarcus Aldridge] in particular, did a good job of containing [Jeff] Teague and his penetration. Our rim-protection, when he did penetrate, Robin [Lppez] or L.A. or Meyers [Leonard] was there. The three-point shot in the first half. The priorities going into the game, the three-point shot, penetration, rim, transition. We took care of all those in the first half. I thought we continued that in the second half.

We all knew about it. You can't help but to know about it. We didn't go in, no one mentioned it as part of the game plan, to stop his streak. But he was definitely a priority in the game plan, as far as not letting him get threes.

Take pride in stopping the streak?

No question. No question. It was a team thing. Wes took a lot of pride in that challenge. It was fun to watch. Especially that third quarter, they were going head to head. [Wesly Matthews] took the challenge. I think he looked forward to it.

I think he's being conscientious about going to the defensive boards rather than leaking out. Again, I'd like to think it's a byproduct of when LaMarcus wasn't playing. The minutes that L.A. is not in the game, we're playing Nic at the four so it's really important that he and the rest of the team rebound. He's been very conscious about going to get them.

LaMarcus Aldridge shoots 1-for-13 but you still dominate

I do think the games that he missed, we figured out some things as far as playing small. We've got to get L.A. back into rhythm. The minutes situation is a little frustrating for him. He was working hard, the shot just wasn't falling for him. He's not playing his normal minutes so the rotation is not the same. It's an adjustment coming back after not playing for two weeks. Playing shorter spans. He doesn't have the same rhythm. When I say the minutes -- they're not the same amount and they're in different stretches.

Just a rhythm thing for Aldridge or is the groin affecting him?

I don't see that. You would have to ask him.

Right now, it's Dallas. It's a tough trip. We made a similar trip earlier in the season. You can't look too far ahead. Dallas is the first stop.

Winning record for the season

I hadn't even realized it until you said it. We're just trying to rack up as many wins as we can.