The Portland Trail Blazers announced on Monday that a fan design contest will help create a new-look Moda Center court for the 2014-15 season.

The Portland Trail Blazers announced on Monday that a fan design contest will help create a new-look Moda Center court for the 2014-15 season.

Fans can go to this website to start designing their new court, with the winner of the contest getting free season tickets.

The Trail Blazers will debut a new court inside Moda Center when the 2014-15 season tips off - and they're inviting fans to help determine what it will look like.

The team has joined forces with lead partner Moda Health to launch the Create the Court contest. Beginning today, fans can visit trailblazers.com/CreateTheCourt and choose from a variety of options to create and submit their design. Among the customizable options: wordmarks, color schemes, patterns and tones. In all, there are 184,320 possible combinations - all within the NBA guidelines.

"This will be one of the most visible changes we've made to our arena in over a decade, so it's important that we involve our fans in the decision-making process," said Chris McGowan, President & CEO of the Trail Blazers and Moda Center. "Conducting the contest on trailblazers.com and enlisting the help of Rip City is going to be a lot of fun and I am excited to start seeing the submissions."

The graphics on the Trail Blazers' current court have been slightly modified over time, but this will be the first time an entirely new court will be installed since the 2002-03 season.

The Trail Blazers are the first known professional sports team to allow fans to design their home playing surface using a digital platform. The team collaborated with Sanborn Media Factory to build the webpage.

Fans will have until March 16 to submit their designs. The team will announce three finalists on March 24, at which point fans can vote for their favorite design through March 30. The finalist that receives the most votes will be unveiled inside Moda Center in early October.

The creator of the winning design will receive a pair of courtside tickets to the Trail Blazers 2014-15 home opener at Moda Center. They will also be recognized on the big screen during the game, receive autographed team merchandise and a customized souvenir from the court. 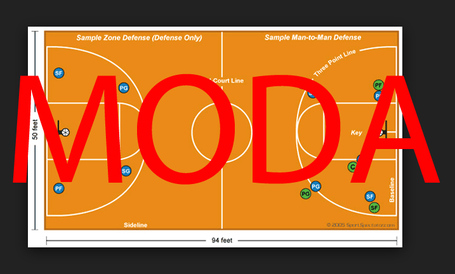 Just kidding. Here's an example of what you can make in the contest, which lets you play with various color options, different words and more. 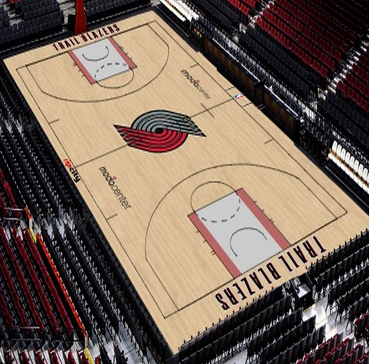 Go ahead and design away. The contest link is here.

Back in November, the Blazers began exploring their options for new home and away jerseys that would have rolled out during the 2015-16 season. By January, they decided to stick with the current looks.

PS Thanks to Rip City is Squatchy in the FanShots.