The Portland Trail Blazers defeated the Milwaukee Bucks, 120-115, in overtime on Tuesday, improving their record to 44-24.

The Portland Trail Blazers defeated the Milwaukee Bucks, 120-115, in overtime on Tuesday, improving their record to 44-24.

Back in the 20th century, they had these groups of books called encyclopedias, which attempted to compile thorough, vital information about all of the most important subjects pertaining to life as we know it. The Blazers endeavored to write the Britannica of Bad Basketball against the Bucks, the NBA's worst team, and they left no page of hoops folly unturned.

Do not save the ball under your own basket: it can lead to an easy scoring opportunity for your opponent.

Apply proper force to perimeter passes: failing to do so can lead to a transition opportunity for your opponent.

Try not to telegraph your passes: surprise is the spice of basketball life.

Maintain awareness of all 360 degrees around your body as you dribble in the open court: blind spots can lead to embarrassing steals.

Try not to fall in love with your own dribble move: watching your jumper clank after breaking someone off will earn you the "million dollar move, 10 cent finish" tag.

If possible, try to at least hit the rim when shooting from outside: it's difficult for your teammates to position themselves to track airballs.

If possible, try not to hit the rim on dunks: the force of the slamming motion can cause the ball to go out of bounds over the backboard, granting possession to the other team.

Catch the ball before you try to dunk the ball: the proper order of operations can be as important in basketball as it is in math and cooking.

Do not commit unnecessary fouls: free throws are free points.

Do not step into the lane before the free throw has been released: it is against the rules.

Adjust: something that beat you early should not also beat you middle and beat you late.

Do not underestimate your opponent: that cheats you, them, the fans and the game.

Do not allow a theoretical talent advantage to manifest as an actual energy disadvantage: hard work beats talent when talent fails to work hard.

This game report is not actually a full encyclopedia but hopefully that list of difficulties beat the point into the ground. It's not easy to achieve a demoralizing victory -- unless it involves a major injury -- but I think the win over Milwaukee qualifies.

"If we would have lost that game everybody in here would have been sick," said Damian Lillard, who finished with 20 points (on 7-for-21 shooting) and four assists. "They had the worst record in the league, we probably came out and thought, 'We're going to win this game.' There's nothing wrong with coming into a game feeling like you're supposed to win, but that's an NBA team over there."

Wesley Matthews added: "[The Bucks] should have put us away. We should have been in the locker room pissed off. But they didn't."

All of the things mentioned above went wrong, among other quirks. Lillard shot 1-for-11 from deep and Dorell Wright chipped in an 0-for-7 from behind the arc. A microphone fell out of its holder during Blazers coach Terry Stotts' post-game speech. An elementary school kid on a unicycle wiped out during the halftime show. Pharrell's hit song "Happy" came on over the public address system and not a single person was moved to clap as if they felt like a room without a roof. Hundreds of fans left the arena at the end of regulation instead of sitting through to the bitter end.

"That was a weird game," Nicolas Batum said, after posting 21 points (on 7-for-15 shooting), nine rebounds and nine assists. "I don't want to talk about it. ... I want to forget that game."

Perhaps the only person who can truly be proud of his performance was Free Throw Guy, who single-handedly caused the Bucks to miss four times from the charity stripe during the final two minutes of the game.

"I'm glad I'm standing here after a win instead of a loss," Stotts said, not looking glad in the slightest. "We didn't come out with the urgency that we needed. ... I hope we understand that we were very fortunate to win the game tonight."

Milwaukee's free throw line misses set the stage for Lillard to force overtime with a late running layup. That basket provided the first real emotional payoff of the entire evening for the crowd, as it eased a tension that had built up during a lackluster night, piled on top of fresh memories of previous late-game failures. It was a hard, aggressive take, and he made no mistake, as they say during soccer broadcasts.

"We were down two, and we spaced the floor and let me go isolation," Lillard explained. "It didn't really make sense for me to settle for a jumper when we were down two and I felt like I could get to the rim."

Ramon Sessions was unable to deliver a game-winning three-pointer on the other end, and the Blazers opened overtime with their first real, sustained flourish of activity of the evening. The game blew open for good when Matthews completed an and-one basket and then stepped in for a steal on Milwaukee's next possession, turning defense into offense by laying off a nifty behind-the-back pass to Lillard for a thunderous dunk. Both players stomped and flexed afterwards, as if exorcising their own exasperation, and the Blazers did what they needed to do from there on out to protect the four-point lead.

"We're happy with the win, always going to take a win, ugly, pretty, doesn't matter," Matthews said, after finishing with a game-high 26 points (on 8-for-15 shooting), two rebounds and two assists. "We're not happy with the way we played. ... We put ourselves there and we got ourselves out of it. ... We know we have to be better to start the game off. More intense, more urgent, more efficient."

Escaping with the victory didn't erase the annoyances or forgive the mistakes, but it should provide some measure of relief. Had they not gotten out of it, Portland would have become the first Western Conference playoff team to lose to Milwaukee all season. They would have dropped to just one game in the loss column ahead of Golden State. They would have been royally pissed off -- as Matthews noted -- and they would have faced a whole new level of questions about their aptitude, focus, and ability to put together complete performances.

"The game completely changed once we realized this could be a horrible loss for us," Lillard said.

Those are words that I imagine no athlete really expects or wants to say and, not coincidentally, they are words that appear in the Britannica of Bad Basketball's third chapter, "How to play down to the level of the competition." 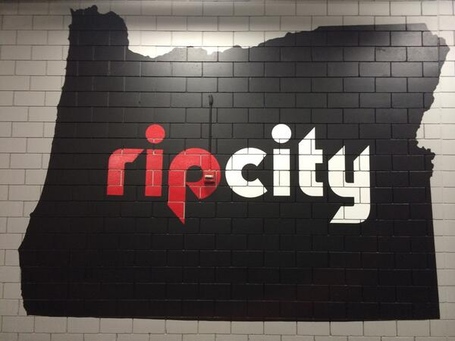 I'm glad I'm standing here after a win instead of a loss. Give Milwaukee a lot of credit. They've had a long season. [Bucks coach] Larry [Drew] has done a great job of keeping them competing and playing hard. They played a great game. I certainly don't want to take away anything from what they did. They played hard the whole game.

That being said, we didn't come out with the urgency that we needed. I thought our bench did a very good job in the first half of giving us a spark. We struggled to shoot the ball from three. Obviously a couple of guys struggled to shoot. I hope we understand that we were very fortunate to win the game tonight.

They were trapping pick and rolls, I thought he could get to the rim. We had good spacing. If he missed, Robin was active on the offensive glass. He came close the first time, and I thought -- Damian is good in those situations and I trust him.

With the style of play, we're playing more of a spacing lineup and he excels in that style of play. He was good with the second unit in the first half. He kind of steadied the ship in the first half, when the bench guys were out there. We need Mo. For him to be able to come in and play the minutes he was playing, that's why we got him.

He wasn't playing his typical game but I don't think he was ill, he just didn't have it going. Struggled a little bit. He turned it on when we needed him to. He made big plays at the end of regulation and in overtime and that's what we've come to expect from him.

I thought it looked good but you know what, that's why you have replay. If they said it wasn't good, it wasn't good. I don't know, I haven't seen the replay. I glanced at the scoreboard. To me it was a good basketball play. They know the rules better than I do.

Takeaway from win in close game

Well, we won a close game in New Orleans. It was a two point game with two minutes. We made plays down the stretch to win that game. I guess your definition is a close game -- if it's coming down to the last possession or whatever. I'm glad we did. The only thing I take away from winning close games -- we've won our share of close games this year, I don't think our confidence has waned. We just have to keep putting ourselves in position to win those games.

He made big shots, particularly the threes. It's good to see his three ball come back. That was a big part of our success early in the season. We need that. Like most good shooters, the shot comes back.