Here's how the Portland Trail Blazers stack up in the various NBA power rankings after week 16 of the 2013-14 season.

The Portland Trail Blazers are 36-17 on the season after an 0-2 week that included losses to the Oklahoma City Thunder and the Los Angeles Clippers before the All-Star Break.

Here's how the Blazers stack up in the various NBA power rankings following week 16 of the 2013-14 season. Last week, the Blazers ranked from No. 4 to No. 10. In new rankings published this week, Portland placed from No. 7 to No. 12, although a number of the rankings weren't updated because of the All-Star break.

After a remarkable and fortuitous beginning, including an 11-game win streak, Portland is no longer a lock for a top-four seed. The Blazers would have loved the sound of No. 5 in the West back in training camp but they raised the bar on themselves. (Andrew R Tonry, TrueHoop Network)

Kudos to Damian Lillard for completing all five events during NBA All-Star weekend without showing any fatigue. To be young.

The Blazers' body of work warrants a top-10 ranking, but their sluggish performance over the last month is tough to ignore. Portland is 5-8 in its last 13 games, a stretch during which its formidable offense has been just league average. If the Blazers aren't elite offensively, their ceiling is a lot lower.

Lost to the Clippers and Thunder last week. However, in a sign of how things are turning in Portland, several All-Stars reportedly told LaMarcus Aldridge they would love to come play with him and Damian Lillard in Portland.

No update this week because of the All-Star break.

The Blazers have started to show some real chinks in their armor, losing six of nine heading into the break. With the Clippers and Rockets surging, Portland has dropped to fifth in the West. On a more positive note, Damian Lillard teamed up with Trey Burke to win the Skills Competition at All-Star Weekend.

No update this week because of the All-Star break.

The awesome photo at the top is courtesy of RareInk.com. More details here. 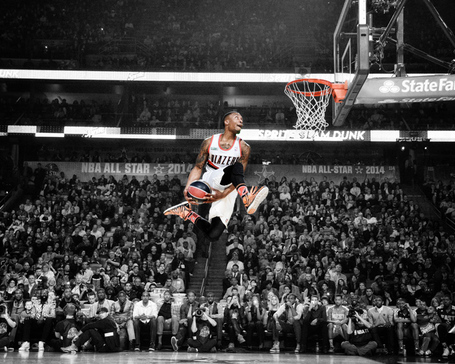