Brooks played Kevin Durant for 35 minutes, and the MVP candidate scored 38 points (on 14-for-27 shooting and 6-for-17 shooting from deep) in the contest. Durant's 17 three-point attempts set a new All-Star Game record, surpassing the old mark of 11. 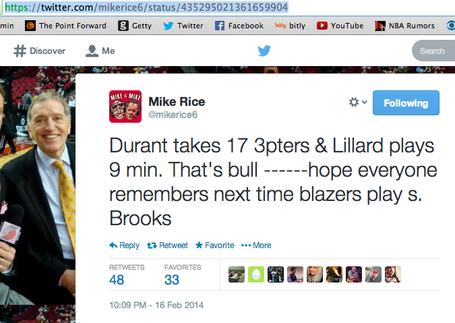 He then compared the minutes handed out to the top six guys in the rotation compared to the bottom six. 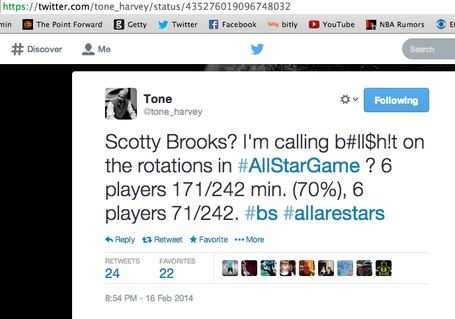 Despite their limited roles, both Aldridge and Lillard were in good spirits after the game and expressed no ill will towards Brooks.

"It was fun," Aldridge said. "I definitely had my opportunity to score. I didn't make many shots. I think I played more minutes. How many did I play? 14 minutes? That's an All-Star Game high for me. It was fun. The whole weekend was fun, I had fun with the activities and the things for the fans. A good weekend."

Lillard added: " It was a great experience for me. Playing in this game today, that's the ultimate goal to be in the All-Star Game, playing with LeBron James, Kevin Durant, Chris Paul and Blake Griffin. I enjoyed myself.

"I understand [that minutes are] a seniority thing. You've got guys that are producing at the same level that I am for my team and they've been here five times already. They're going to be on the floor. That's a respect thing and that's the way it should be. If I'm ever a five-time or four-time All-Star and a first-time All-Star comes in and plays more minutes than me, or finishing the game over me, I'm not going to like that. I respect it."

Brooks had this to say about managing his team's minutes during his post-game comments.

You can't please 12 starters. But 12 players deserved to start, deserved to play minutes, deserved to get fourth quarter minutes, deserved to get play calls. You just can't. You just try to do your best. You try to give the respect of the veteran guys, the starters, and the guys that have been here multiple years. And then some guys you talk to before, they might be banged up, you don't want to throw them out there and play extra minutes. But it's hard. It's hard. It's stressful. At the same time it's exciting to be around 12 of the greatest players in the conference.

Two years ago, Aldridge was unhappy with his playing time during his first career All-Star Game appearance, in which he tallied four points in less than 10 minutes of action, the third-fewest minutes for the West that year. Brooks was also the coach of that game.

After the game, Aldridge addressed a small group of reporters in the Mixed Zone media area, saying that he was as surprised about his playing time as everyone else. He said multiple times that he "definitely" expected more run.

Aldridge said that the last time he can remember playing so little was the 2006-2007 season, when he averaged 22 minutes a night, mostly off of the bench.

"My rookie year. When I was playing behind Zach Randolph," Aldridge said. "I haven't played that amount of minutes in a long time. It's an All-Star Game, it was my first one."

Brooks said that year that he simply had his hands full getting everyone into the game.

"That's the toughest thing about being in this position," Brooks said of managing minutes. "There's 12 guys that are deserving. Such elite, select company to be one of the 12 All-Stars. This is his first time of many. I thought his minutes... he played hard, he played well."

The Blazers and Thunder have completed their 2013-14 regular season series, splitting it two games apiece. The earliest they could play would be the 2014 playoffs.

Aldridge and Durant expressed a mutual respect but also a lack of friendly feelings following a game between the two teams last week.