Notes and quotes from the 2014 All-Star Weekend in New Orleans, where Portland Trail Blazers forward LaMarcus Aldridge and guard Damian Lillard are getting ready to compete.

It's been another insanely busy All-Star Weekend. Here's a quick-and-dirty notes and quotes rundown from All-Star Friday as Portland Trail Blazers guard Damian Lillard prepares for three events on Saturday and then both Lillard and forward LaMarcus Aldridge suit up for the All-Star Game on Sunday.

All-Star Friday is set up with monster media availability sessions that draw hundreds of reporters. Often the players are going through the motions because it's such a circus, but there were a few nuggets from this year's availability.

The biggest surprise: a Utah Jazz great just couldn't stop praising the Blazers. Karl Malone not only selected Lillard as his pick to win the Slam Dunk Contest, but he spoke at length about why he likes Aldridge.

My [Slam Dunk Contest] dark horse would be Lillard. I've watched that kid play in Utah at Weber State. Portland is one of the teams that I watch. I've seen him in games. Dark horse, a little favorite of mine.

Oklahoma City Thunder forward Kevin Durant is growing up on the court, obviously, and this was the first All-Star media session where I though to myself, "Man, he's not young any more." Just in terms of the way he handles himself. It's crazy that he is 25 years old.

Anyway, Durant was asked who he wants to join him on the 2014 FIBA World Cup team. Here was his list of endorsements in order.

Aldridge was getting nice, generic praise from lots of different folks, but I thought New Orleans Pelicans forward Anthony Davis's comments were the most genuine that I heard. Davis, 20, is making his first All-Star Game appearance and he was asked which All-Stars he was looking forward to playing with and learning from. He said "definitely LaMarcus Aldridge" because "he's a major talent." I asked him why Aldridge before all the others...

We kind of have similar games but he just makes it look so easy. He doesn't get frustrated. He plays so hard. He's a great player. He's a tough guy to guard. When I guard him, it's tough. He's seen it all. Double teams. Things like that. That's what I'm starting to get to. Learning from him, how he approaches every game, knowing what teams are going to do, and still make it look so easy.

Of course, this sounded almost exactly like what Aldridge has said about San Antonio Spurs legend Tim Duncan over the years.

Golden State Warriors guard Stephen Curry mentioned Lillard and San Antonio Spurs guard Marco Belinelli as his picks for who would be the toughest to beat in the Three-Point Shootout. He said Lillard's deep game-winners were the reason he picked him.

I didn't hear a ton of the media sessions conducted by Aldridge and Lillard because I was bouncing around a bit, but they both looked comfortable and not totally fed up with the reporters when I did check in. 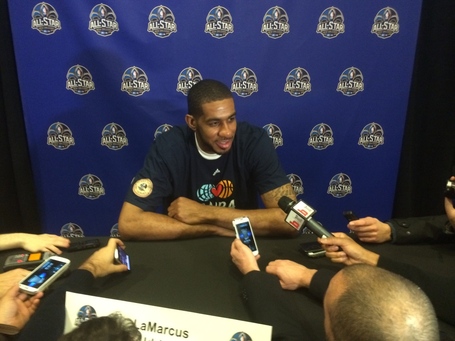 Aldridge did say that he doesn't think the Blazers necessarily need to make a trade following the injury of Joel Freeland.

No. I don't think so. We still have Meyers [Leonard] who everybody loves. We have [Thomas Robinson], a physical guy down low. We have a guy who can fill the void until Joel comes back.

Lillard talked a little bit about how his life has changed in recent years, how people want autographs and photographs when he goes out to eat dinner.

I asked him a few questions about the Dunk Contest's new format and whether his Western Conference team was prepared. (Here's information on the new format if you haven't heard about it yet.)

I like it. It's different, it's good for a contest like that where fans have seen pretty much every dunk to put a twist on it. I'm excited about it. It takes pressure off individual dunkers - they don't have to be perfect to have a chance.

We know what we're going to do. I don't want to tell people what it's going to be. 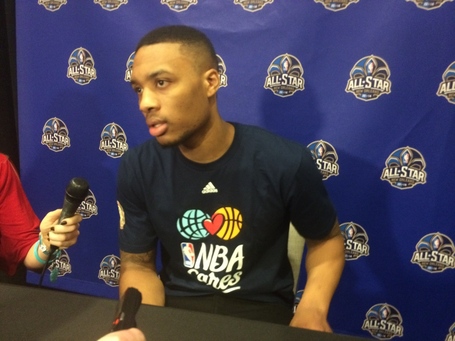 Here's Lillard on what it meant for injured Los Angeles Lakers guard Kobe Bryant to endorse him for the All-Star Game.

For Kobe to say that about me, that's big. I respect that a lot. That just lets me know that I'm doing something right. When you've got somebody like Kobe that speaks about you in that light, that gives you something that you have to back up. I have to keep working to prove it up to be the player he's saying I am.

Timmay's got you covered on what happened during a fairly quiet Rising Stars Challenge for Lillard on Friday night.

Mike Tokito of The Oregonian has more from Aldridge's availability right here.

Here's an extended Slam Dunk Contest preview with thoughts from all of the dunkers if you're interested.

All-Star Saturday kicks off in a few hours and we go forward from there. Be sure to follow along on Twitter for live coverage.