Adam Figman wrote the story, and he's posted a preview and a short Q&A, which is supplemented by a number of photos, right here. Here's an excerpt, which focuses on Lillard's reaction to a game-winner during his rookie year.

That look has fascinated me since Lillard first began draining clutch shots during the winter of 2012-not only that he has an amazing method of demonstrating all-out excitement, but that he completely skipped the requisite "Woooooo this is really happening!"-type emotion that most rookies exhibit after hitting their first huge shots and jumped directly to, "Yeah, I just did that"-styled confidence. Transitions are overrated, anyway.

When I sat down with Dame in late January, this subject was one of the first things we discussed. Here he is on the matter: "That's the East Oakland in me. It's like this kind of chip that you have on your shoulder that you carry with you, that underdog mentality. It's always been where people didn't believe in me or I didn't have an opportunity, so I kind of have a me-against-the-world mentality. I feel like I still need to earn it. So when stuff like [game-winners] happens, that's the expression of, Now what?"

For the cover shoot, Lillard is pictured wearing his red, sleeved 2014 Western Conference All-Star jersey. He was recently selected as a reserve, he plans to compete in five events, and he will wear special edition Adidas sneakers during All-Star Weekend in New Orleans, which kicks off later this week.

Here's a look at the cover via SlamOnline.com. 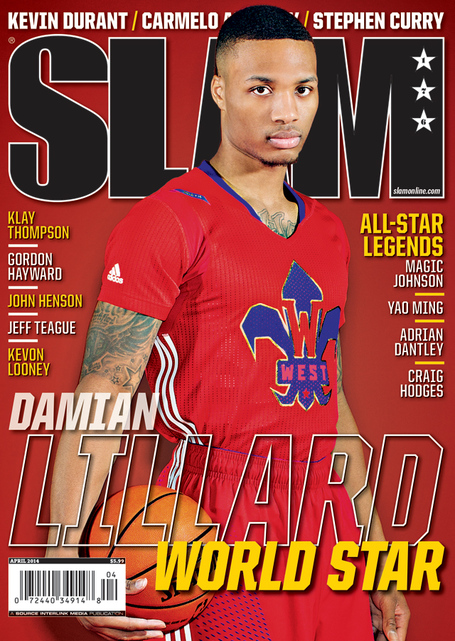 The magazine will hit newsstands next week.

Lillard was the subject of a Sports Illustrated story last month.

Back in February 2013, Lillard was the subject of a Dime Magazine cover story.