The Portland Trail Blazers defeated the Charlotte Bobcats, 134-104, at the Moda Center on Thursday, improving their record to 26-7.

The Portland Trail Blazers defeated the Charlotte Bobcats, 134-104, at the Moda Center on Thursday, improving their record to 26-7.

It's been nearly two years since a close loss to the Oklahoma City Thunder, a game swung by a controversial goaltending call on LaMarcus Aldridge, more or less derailed the Blazers' 2011-12 season. It was a memorable turning point that saw a 14-10 start morph into a 14-28 finish, and the locker room after that game was a bitter funeral, rare in the degree to which emotions were left unchecked. This week, Aldridge agreed that Portland's victory over Oklahoma City on Tuesday was its most impressive of this season, and the carry-over effect from that win sure looked like the inverse, the reverse, the opposite and the upside-down of that rough defeat from two seasons back.

What gave it away that this group is sitting on cloud nine after a hard-fought, improbable and cherished road win over a division rival? Maybe it was the wide smiles on the photographs from the flight home. Maybe it was a 39-point, no-mercy first quarter against the reeling Charlotte Bobcats in their first game since Tuesday. Maybe it was Thursday's record-setting shooting performance from beyond the arc. Maybe it was Wesley Matthews suggesting that the Blazers were taking their defense so seriously that they wanted to pitch a shutout against the Bobcats. Maybe it was Meyers Leonard getting in a shoulder-dusting dig when reflecting on the win at Chesapeake Energy Arena.

"[Losing to the Thunder] would have been a long flight home, a spoiled New Year, [but] we got it done," Leonard told Blazersedge. "You're talking about beating one of, if not the best team in the West right now. Other than us."

Or maybe it was the introduction of the best Blazers meme in years, revealed by Bruce Ely, eagle-eyed photographer for The Oregonian.

"I believe Thomas Robinson is yelling 'lunch meat' every time Aldridge touches the ball against Josh McRoberts," Ely reported on Twitter from his baseline spot.

Lunch meat, it turns out, is exactly what Robinson was yelling.

"Lunch meat," Robinson explained to Blazersedge, smiling. "Whatchu do when you got some lunch meat? You eat it. Exactly! Whenever someone [is guarding Aldridge], he's always eating. He's L.A. Whenever somebody on him, he eat him. Lunch meat. That's how it is."

Post defenders are being reduced to nothing more than lifeless strips of bologna, waiting to be consumed.

"There's no one that can really stop him one-on-one on the block, let alone anywhere on the court," Leonard told Blazersedge. "L.A. is so skilled. It basically just means that L.A. is about to get a bucket. He's eating."

Even better, the "lunch meat" cry -- which almost amounts to celebratory pity, if such a thing exists -- is being heard loud and clear on the court.

"It means the guy can't guard me," Aldridge sheepishly told Blazersedge. "That I'm going to score at will. It's not that simple when I'm doing it. They say it looks that easy sometimes. It's fine, but I'm not going to get into it, I'm not going to say it myself."

I've heard pick-up players shout out "knockdown" and "buckets" and "all day" and "money" and "butter" and a host of other things when making shots over the years, but "lunch meat" tops them all. If you don't turn to your vanquished opponent at your next park or rec league game and shout some variation of "Lunchables! What!" then there's something wrong with you. 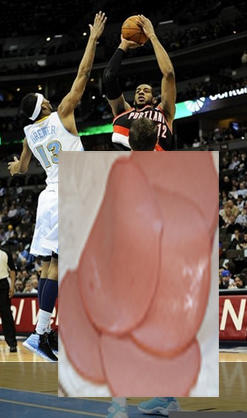 In any case, Charlotte's defense was more of an all-you-can-eat buffet, as the Bobcats elected to send extra attention to Aldridge, who posted 10 points (on 5-for-13 shooting) and 15 rebounds in 28 minutes. That decision simply opened the floodgates and they never closed. Portland hit its first seven three-pointers, Matthews (25 points on 8-for-11 shooting) and Damian Lillard (24 points on 9-for-13 shooting) combined to shoot 11-for-12 from deep on the night, and this game was over, for all intents and purposes, after about four minutes. When all was said and done, six Blazers had hit double figures and Portland had tallied its second-highest point total of the season.

"I don't feel like we were ready to play," Bobcats forward Chris Douglas-Roberts, who scored a team-high 20 points (on 6-for-8 shooting), admitted afterwards. "We have to do some soul-searching to turn this around."

This one went down as one of the very easiest wins of Portland's year, leaving plenty of garbage time minutes for the seldom-used deep reserves. Still, the Blazers looked to find ways to motivate themselves -- games within games -- from start to finish.

"Everybody that got scored on tonight was mad about it," Matthews told Blazersedge, and the Blazers could be seen going right back at Douglas-Roberts after he scored on multiple occasions. "We know we can score, we know we can get hot like this, it's our defense that has to take us over the hump."

The Blazers also took the unusual step of pressing the Bobcats late in the game, even while holding a 31-point lead and with the benches emptied.

"They playoffs are in three months," reasoned Nicolas Batum, who posted eight points (on 3-for-6 shooting), seven rebounds and seven assists. "When you think about it, it's going to come quick. We've got to work on our game right now if we want to be ready."

All 13 active Blazers saw time on Thursday, including Robinson, who hadn't appeared in a game since Dec. 18, when Leonard took his spot in the rotation.The second-year forward scored five points and grabbed five rebounds in eight minutes, and he opened up a bit about recent events.

"Coach benched me because he felt like I wasn't moving the ball," Robinson told Blazersedge. "Actually, playing basketball is a learning process for me. Getting the reads. I'm a good player, I just want to play. That's all."

Blazers coach Terry Stotts told reporters in December that he was opting for Leonard over Robinson because Leonard offered better floor-spacing on offense. As noted here, Portland's lineups weren't performing very well with Robinson in the mix, and he holds the team's third-highest usage rate, behind only Aldridge and Lillard. In pre-game comments Thursday, Stotts acknowledged that perhaps he did a "disservice" to Leonard by focusing so much on the offensive end, as he was also liking what Leonard provided defensively.

"[I was benched for] multiple reasons," Robinson continued, hesitating to give additional specifics. "I wasn't playing at the highest level. It doesn't matter why [Stotts] benched me. It was a coach's decision and I respect it. I just want my name to get called again. ... I can't really go over [why], that's really up to coach to explain if he wants to. I just want the opportunity to get out there because I can help this team. ... I definitely get [my role]. It's about waiting for my next time."

That time could come again soon with five straight games against sub-.500 teams over the next 12 days. It could come again if Portland keeps playing this type of dominant, two-way basketball that included an elusive strong start and a steady burn throughout, the type of play that leaves everyone in a jokey, world-conquering mood afterwards.

The early giggles might have been centered on McRoberts and others stuck with the unenviable task of defending Aldridge during this, his career year, but the night's final satisfaction landed back on the team's outside shooting, which looked ripped straight from the Three-Point Shootout. After hitting 21 threes against the Philadelphia 76ers on Dec. 14, the Blazers did it again for the second time in less than a month, thereby becoming the first NBA team to hit 20+ three-pointers in a game twice during the same season.

"I like being part of history," Stotts said. "I think that's pretty cool."

"I'm always happy to be part of history, when it's good history," Matthews added.

How about those Sooners!

Ask Mo Williams what he thinks about the Sooners

Other than the Sooners -- it was a good game obviously. We look fresh. Played well at both ends of the court. Not a lot to say. We caught a team on a back-to-back. More than anything else, we passed the ball really well, guys were feeling it.

Almost 40 points in the first quarter

I really liked our approach coming into the game as far as the starters just really set the tone with their defense, with the ball movement. I just thought our ball movement led to good shots and we've got good shooters.

Nice to have a blowout win?

Yes. It's always good to get a win like this. Guys on the bench can get some minutes, starters can get some rest. You've got to enjoy these because they don't come often.

Three-point record, on your mind?

I knew about it last time. Last time, I didn't know it. I knew about it, I knew our record, I knew the NBA record, I didn't want to get caught up in that. If we fell into it, that's great. I felt like the guys played the fourth quarter the right way, they were aggressive, they moved the ball, defensively they played hard. I think it's bad karma to go out and do that. I think it's important for those guys to keep playing.

Three-point attempt for LaMarcus Aldridge at end of first half

I drew up a bad play. They defended it well. It was a low clock.

I think he's looking more and more confident. I think he's going after rebounds better. I really wasn't too concerned about him offensively about him making shots and knowing the offense. He just looks more comfortable and confident.

I won't go into history but when you get games going like that, you're going to have games like that. That first quarter, first half, the game was flowing. I've said this a few time: I'm a big believer in confidence at the offensive end and we were shooting with confidence.

Oklahoma City was excellent. Tonight they made some shots at the end but I thought we had a very good defensive game even though we probably didn't end up with good defensive numbers. Since the first half in New Orleans where we didn't play very well defensively, the second half of New Orleans, Oklahoma City and tonight we have ramped our defense back up.

I think it was just collectively, we all more of a commitment. Oklahoma City -- when the shots aren't falling, to have a gritty win like that, winning it with defense, reinforces what we can do.