Naomi Zeichner of TheFader.com caught up with Bloody Jay to ask the important question: "Why?"

Reached by phone, Bloody Jay offered an explanation. He and Young Thug, he said, consider themselves innovators, and wanted to give that purpose a name. "We're on fire right now in the streets of Atlanta, and we're stoners, so you know, we're the Blazers and Atlanta is Black Portland," said Jay.

Bloody Jay is also a fan of Portland's team, and identifies his determination in its roster. "[The Blazers are] young and ambitious. There's a lot of players on their team that you might have never heard of, but they're all coming in and playing as a real team. They stick together. You know that if you play them, you're gonna have a hard night."

Portland is one of America's whitest major cities; in Jay's words, "more of a caucasian city." In turn, Black Portland is both a nickname for contemporary Atlanta and an imaginary place, like the Atlantis to OutKast's Atlanta, where young creative thinkers live. "Black Portland is our own world," Jay explains, "and all of us have some Black Portland in us. It's where ambition, freedom and being young all roll into one. A never-ending party, just changing the color on your mood ring. That's the kid in you, that wants to get outside when you've been in the house too much, that's Black Portland. That Saturday when the sun is beaming through your window, that's Black Portland."

You can read the full post -- in which Bloody Jay also identifies Damian Lillard as his favorite Blazers player -- right here.

You can stream the "Black Portland" mixtape -- which includes songs titled "Suck Me Up" and "4 Eva Bloody" -- over at Complex.com right here or at AudioMack.com here. NSFW. Probably do not stream this in your office complex.

Here's a look at the album's artwork via Vibe.com. 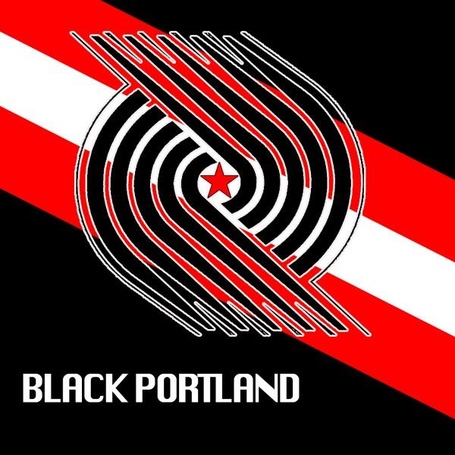 The Blazers recently released a video for a song entitled "R1p City" by local rapper Speedygunz, and the track is occasionally played at the Moda Center on game days.