The Portland Trail Blazers defeated the Cleveland Cavaliers, 108-96, at the Moda Center on Wednesday night, improving their record to 29-9.

The Portland Trail Blazers defeated the Cleveland Cavaliers, 108-96, at the Moda Center on Wednesday night, improving their record to 29-9.

It's a scene that pops up in soap operas, music videos, commercials, sitcoms, feature-length films, you name it -- and you've definitely seen it. One half of the relationship, long past its wit's end and with no time for this nonsense, starts heaping clothes and possessions (often golf clubs) on the front lawn. The other half of the relationship pulls up to the house, mid-heaping, with a dumbfounded look, saying nothing as alibis are mentally concocted and excuses are put on file. But there will be no time for talking. The first half shoots eye-to-eye daggers at the second half, slowly pivots and then walks through the house's entrance, slamming the door for effect and forever. It's over, second half, pick up your gear and start thinking about where you're going to sleep tonight.

One minute, Cleveland was driving home from work, minding its own business, thinking about what's for dinner, with the score tied at 96. The next minute -- well, the next 2:31 to be precise -- the Cavaliers found themselves on the outside of that slammed door, with no doorbell to turn to for help, victims of a 12-0 closeout push that was so emphatic and forceful that Blazers coach Terry Stotts somehow was able to put his subs back into the game in the game's final minute.

From the 3:17 mark to the :30 mark, Portland scored on every single one of its offensive possessions. From the 2:53 mark to the end of the game, Cleveland didn't score a single point, and they didn't attempt a shot from inside 18 feet. There weren't many, if any, clean looks to be found by the Cavaliers either. This was a "get out of my life" endgame flourish from the Blazers, a commanding two-way display that you hope to see from a team with three days of rest against a weaker opponent on the second night of a back-to-back.

"I looked up and it was two minutes [left]," LaMarcus Aldridge told Blazersedge. "I was talking to Will Barton, I was like, 'It's my time.' I stepped up."

Aldridge scored nine straight points for Portland in four possessions over less than two minutes, kicking off his run with his first three-pointer of the season. He joked afterwards that he won't be campaigning for a spot in the Three-Point Shootout. He will, however, be all up in your cafeteria, devouring your lunch meat.

Poor Tristan Thompson -- still so young that he doesn't know with which hand he should be shooting -- didn't have a chance. With the clock under two minutes, Aldridge backed Thompson down, turned to the middle, and split the help defense for a slithering left-handed lay-up. It was a difficult, twisting, off-handed play that was made to look so easy.

"They doubled once," Aldridge told Blazersedge, when asked if he was surprised he encountered mostly single-coverage down the stretch. "They told Luol Deng to double once, after that, I missed my next shot. I think they felt I wasn't going to score any more, [so] they stopped doubling and I had one-on-one coverage."

One-on-one coverage wasn't going to cut it. That basket closed Aldridge's run -- which also included two free throws and a mid-range jumper -- and it gave Portland a six-point lead. Cleveland was forced to call timeout.

"He knew it was winning time," Stotts said of Aldridge, who finished with a game-high 32 points (on 12-for-26 shooting), 18 rebounds and four assists. "You could see him with the determination of making a play at the rim."

The only thing left was for Damian Lillard, who added 28 points (on 10-for-20 shooting), six rebounds and five assists, to twist the dagger with a deep, pull-up three-pointer.

As impressive as Aldridge's late-game manhandling was Portland's team-wide defensive intensity in the game's last chapter. The Blazers' starting/closing five was made whole when Wesley Matthews checked into the game with 2:31 remaining; from that point on, the Cavaliers shot 0-for-6 from the field and failed to generate a single opportunity going towards the basket or in the paint, and they secured zero offensive rebounds.

"I thought everybody took an individual challenge," Stotts said. "On the pick-and-rolls, our bigs were good at containing the ball and not giving them an alley to the basket. The one-on-one defense -- our stances were good. Taking away angles on the drives, the help defense was there. I think it was a combination of good individual defense and good pick-and-roll defense."

"We need to extend that stretch -- instead of the last two and a half minutes, it's got to be the last seven or eight minutes of each quarter," Wesley Matthews told Blazersedge, apparently hoping to be part of a shutout one day. "[We were] just trying to not let the ball get to the middle. They've got a lot of guys who can score, play one-on-one off the bounce. They've got guys who come out and set screens, they're a different team after the trade. We just have to be sound, make sure that ball stayed out of the middle, make sure they didn't get to our paint."

Cleveland broke -- and broke cleanly -- in those moments.

It's possible that the Cavaliers were lacking energy playing their third game in four nights, including a nail-biter against the Lakers in Los Angeles on Tuesday. It's possible that they aren't yet sure how the pecking order should play out following their recent trade for Deng. It's possible that their roster isn't yet at a place where they enter such situations with total confidence. But this Cleveland team has made life difficult for Portland, as recently as a December game that went down to the closing seconds, and they kept things competitive for 45.5 minutes.

Then the rout and the squeeze was on.

"[Us] guards were just pursuing more over the screens, trying to not let them get easy shots," Lillard told Blazersedge. "They were fighting through pick-and-rolls better, bigs were clogging the paint better. Bigs and guards did an overall better job. ... I wouldn't say [this was a] signature [effort] but it just shows that we can defend that way. We've got to do it more often. The game was on the line, I think everybody understood what needed to happen."

Well, I would say that this was a signature defensive effort, a fairly rare stretch in which the words "imposing" and "suffocating" just might apply. Although the final score was respectable, the victory over Cleveland nicely book-ended with Portland's blowout of the Charlotte Bobcats on Jan. 2, completing a 4-2 run through a soft six-game stretch.

Of greater interest to the Blazers, even in the moments immediately after their win, was the balance of their January slate, which includes eight straight games against Western Conference playoff hopefuls, beginning with a four-game, five-day road trip against four of the West's top eight teams.

"This is like playoffs, damn near," Thomas Robinson told Blazersedge. "If we come out strong, then definitely all doubts should leave us alone."

Lillard added: "We understand it's going to be tough. All of these teams are playoff teams so we've got to go in and have that mentality. It's going to be a war for us, everybody has to be ready for it." 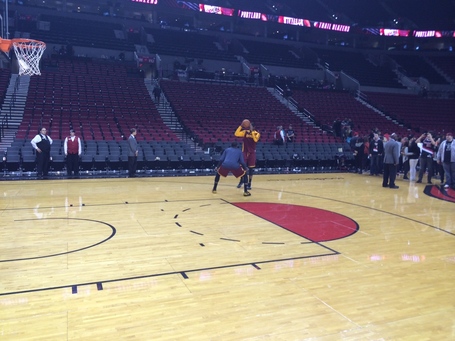 I was very pleased with our defense, for the most part, throughout the game, but particularly in the fourth quarter. We really did a nice job of protecting the rim, forcing mid-range shots. LaMarcus [Aldridge] and Damian [Lillard] did a nice job of closing it. We hit some timely shots. Obviously LaMarcus's three was timely. [Nicolas Batum]'s kickout to Damian's three was timely. I thought our bench did a very good job of getting the lead and getting some momentum for us during their run in the second half. To be able to bring the starters back in with a tie game, that was something that we needed.

I really thought it was very good individual defense, whether it was Mo [Williams] or Damian or Wes [Matthews] or Nic. I thought they all in the second half were in the stance, were taking the individual challenge of guarding Waiters and Irving in particular.

Mo brings a lot of energy, his gamesmanship, his understanding of how the game is going, getting people shots. Defensively, they were trying to go at him with Waiters and he really took that challenge as well. I thought that gave our team some energy as well.

Challenging. Four teams that are in the playoffs. I'm always reluctant to talk about a whole road trip. Right now, it's about San Antonio. I think they've won six in a row and have the best record in the league, or close to it. The road trip is challenging, but like anything else you can't look at the whole thing. If you're going to read a 2,000 page book -- you can't look at the whole book. You've got to take the first chapter.

I thought everybody took an individual challenge. On the pick-and-rolls, our bigs were good at containing the ball and not giving them an alley to the basket. The one-on-one defense -- our stances were good. Taking away angles on the drives, the help defense was there. I think it was a combination of good individual defense and good pick-and-roll defense.

He had a lot of good mid-range shots that he usually makes a better percentage of that. The two plays that he made going to the basket, aggressive, strong moves. He knew it was winning time. You could see him with the determination of making a play at the rim. Both plays paid off for us.

I thought what our bench did -- and Wes was in with that group, they provided us a lot of energy. We had a nice little run, gave a little bit of it back, but to be able to extend the lead with your bench that's an important thing in this league. It was kind of wobbly there for a little bit but we had a nice little, two-minute spurt that built the lead and got us the momentum.

It seemed like... it just seemed like, um, it -- there were a lot of things that maybe didn't show up in the stat line, but guys like T. Rob, able to give LaMarcus Aldridge his energy. It was, like you said, the back-ups that were able to gain the lead in this contest. Is that something that we're going to be able to see game in and game out going through the rest of this -- into this four game trip that you're going on?

Can you give me the abbreviated version of that question?

So, being able to get that energy from your bench was obviously --

-- Look, the bench is important. I mean you can't understate what they can give us. Whether it's scoring, energy or defense. To be able to reset our starters, the rotation was pretty much the same tonight as it's been, with the exception of CJ, I've had to tweak the rotation. Hopefully you'l see that every night from our bench.