The Portland Trail Blazers defeated the Boston Celtics, 112-104, at the Moda Center on Saturday, improving their record to 28-9.

The Portland Trail Blazers defeated the Boston Celtics, 112-104, at the Moda Center on Saturday, improving their record to 28-9.

Let's not give this one any more gravity than it deserves: this was a schedule annoyance, a three-hour work shift in the midst of an extended break, and nothing more. Saturday's contest stood as Portland's only game during a seven-day stretch and it came against a bottom-feeding Eastern Conference team that was on its fourth game in five nights, at the end of a long road trip, and mired in a lengthy losing streak. Those conditions made for a quick and dirty game that freed Boston to fly home and allowed Portland to hit the town.

Even so, the Blazers enjoyed this win with the looks of men who had stubbed their toes or spilled orange soda on their white carpets. The mostly angsty reaction resulted from the carbon copy nature of the game: like so many other recent performances, Portland faced an early deficit, lacked defensive intensity throughout the first half and committed some maddening turnovers before bailing itself out with an overwhelming second-half push against a lesser opponent.

"You try not to be disappointed by not playing as well as you wanted to," Blazers coach Terry Stotts said. "Offensively we were good when we needed to be. The stretch of games playing teams with a lesser record is apparently tough for us to get up for."

The same warts that popped up in recent losses to the Philadelphia 76ers and Sacramento Kings, and showed up in Wednesday's win over the Orlando Magic, were back again. Portland conceded 60 points and 62 percent shooting in the first half, as Boston's trio of guards -- Avery Bradley, Jordan Crawford and Jerryd Bayless -- got into the paint, hit some zany shots and did it all without really over-exerting themselves.

The only Portland player who seemed truly distressed by the ongoing defensive let-ups was Robin Lopez, who chose his words carefully but eventually got around to asking for more from his teammates.

"The issue is effort," Lopez told Blazersedge. "Sometimes I don't think everybody is giving enough on defense. We're not going for loose balls, things like that."

The second half started with two quick buckets from Portland's center, who finished with 15 points (on 5-for-13 shooting) and 13 rebounds, including nine offensive. Boston's lack of a true center was a deciding factor, once Portland decided to get a little more serious. The likes of Kris Humphries, Brandon Bass, Jeff Green and Jared Sullinger strained and tried, but the disparity in length and wingspan between the teams made this a tipped scale kind of night. That shouldn't have come as a surprise: the Blazers rank No. 2 in offensive rebounding rate and the Celtics are a bottom-five team in defensive rebounding rate.

The defining sequence came early in the fourth quarter, when the Blazers registered three consecutive offensive rebounds on the same possession before LaMarcus Aldridge, who posted 21 points (on 8-for-15 shooting) and 13 rebounds, finally ended the play with a bucket. This might not have been as embarrassing as getting posterized by Blake Griffin, as Humphries was earlier this week, but it was surely just as demoralizing.

"We don't emphasize [our offensive rebounding] but it's been a big part of our offense," Stotts said. "Robin does a really good job of pursuing balls. Obviously we had a height advantage. We didn't emphasize it, it just turned out that way. You take advantage of the strengths that you have."

Wesley Matthews, who finished with 18 points (on 5-for-12 shooting), and five rebounds added: "We have a big frontline between L.A. and Rolo. Whenever L.A. gets the ball, he's going to demand double teams. Occupies three people. When that shot goes up, it gives opportunities for [Nicolas Batum] and Robin to tap the ball out."

If there was anything to be learned from on this afterthought kind of night -- in which many of the players dressed quickly and headed on their merry ways -- it was the play of CJ McCollum, who scored 10 points (on 4-for-6 shooting) in 13 minutes. He combined with Mo Williams to provide five three-pointers off the bench, and he came out gunning, knocking in a right angle three shortly after checking in.

"When you get to see the ball go in the basket early on, it gives you confidence and helps a lot," McCollum told Blazersedge. "I was wide open for a catch-and-shoot opportunity and I wanted to be more aggressive [compared to Wednesday]. That's just an easy shot to make. A lot of guys in the NBA can make a catch-and-shoot three."

This wasn't a takeover performance from the rookie but his scoring made a difference on a night in which Portland's reserve bigs offered little. Joel Freeland and Thomas Robinson combined for just six points and six rebounds in 24 minutes, and the endgame sequence could have been hairy had McCollum failed to leave an imprint too.

Asked for a tease of what we haven't been able to witness yet, McCollum smiled, and said only: "You'll see soon."

Stotts sounded thrilled by McCollum's play, which also included a nice floater in the lane, and he should be. Lillard played under 35 minutes for the second straight night, and that will be something to track here once Portland's competition stiffens. On the season, Lillard is down two minutes a night from his league-leading rookie year load, and the addition of McCollum potentially offers the chance to shave a few more minutes from his plate.

"[McCollum] was terrific," Stotts said. "He kept us afloat in the first half. He came in aggressive, he looked for his shots. ... He seemed like he was much more comfortable tonight than he was in his first game."

The playing time issue was raised by Lillard a few times during the offseason, but it's really been a non-subject so far this season. On Wednesday, he was asked if McCollum's addition might make his life easier, but he passed off the question rather than jumping on it like a worn down player would. There's no magic number when it comes to playing time, but 36 certainly sounds better than 38, and 34 sounds even better than 36, so long as the Williams/McCollum duo can approximate what Lillard brings to the table.

Although Stotts suggested that his team was playing down to the competition and Lopez was the only voice to really hammer on about the defensive intensity, others broached those subjects indirectly. To Lillard, the team's offensive success -- the ease with which the Blazers can put up 112 points, even on a "B" or "C" effort night -- has developed into a gift and a curse situation.

"I think the problem is we feel like we can win games [regardless]," Lillard told Blazersedge. "We've been down 20 points at home and on the road and we come back and have been able to win games. It's us having that confidence in ourselves, we allow ourselves to relax [early]."

Informed of Lopez's comments, and asked if he felt like he was individually letting up early in games or whether it was a team-wide issue, Lillard agreed that the required effort isn't always there.

"It's a team thing," Lillard told Blazersedge. "It might be me one possession, another guy the next. As a whole, we've got to be better to start games. ... Coverages are not tight enough, lack of communication, we're not getting from 'A' to B' fast enough, we're playing slow. Other teams come in [playing] in attack mode, playing fast, and we're a step slow. They get a lead on us."

The upside is that this team rarely panics when it falls behind, it rarely falls behind by so much that the game gets out of reach, and it rarely deviates from its offensive system regardless of the point spread. What that system does, often but not always, is chew up these Eastern Conference cupcakes Felton-style over the course of a 48-minute game. Even on a so-so night from Lillard, in which he finished with 15 points (on 5-for-15 shooting) and six assists, Portland's attack -- which included 10 three-pointers and 31 second-chance points -- left first-year Celtics coach Brad Stevens gushing.

"Their offense was just outstanding," the former Butler coach said. "We talked about the continuity of their system, and they know their reads inside and out. Especially when they have Williams and Lillard in. Gosh, their ability to put the ball on the floor. You've got to be cognizant of where your guys are because they score so well."

That impressed outside sentiment, however, was not shared inside the Blazers' locker room.

"I kind of like the mood," Matthews said. "We were excited by the win, but we weren't excited by how we got it. ... We'll take every single win every single way, [but] we demand more of ourselves."

The takeaway sensation was one of teenage procrastination: they're well aware of the issues, they're not totally sure how to solve them and they can't guarantee when they will be solved, but they're pretty confident that things will work out in the end. Anyway, there were other places to be, and the win had been secured, so the anger and the deep self-examination would need to come at some other, later date.

The fewest words and the cleanest exit were of greater immediate importance, and the simplest explanation did well to capture the state of the union. 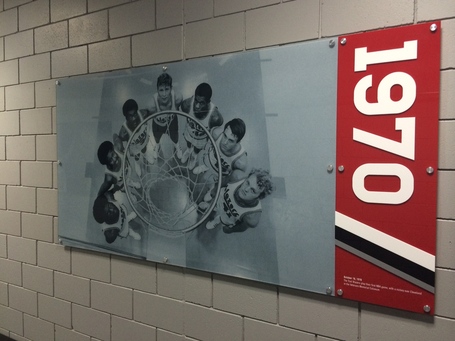 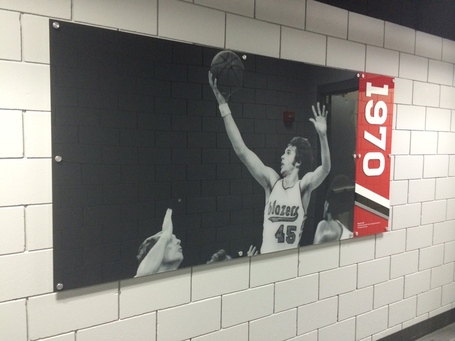 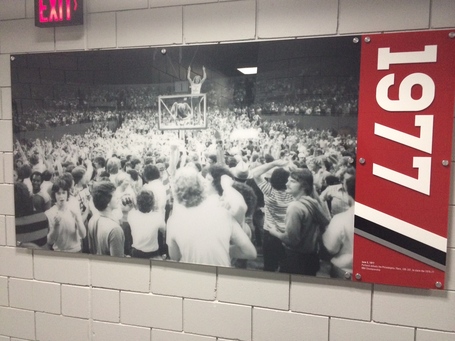 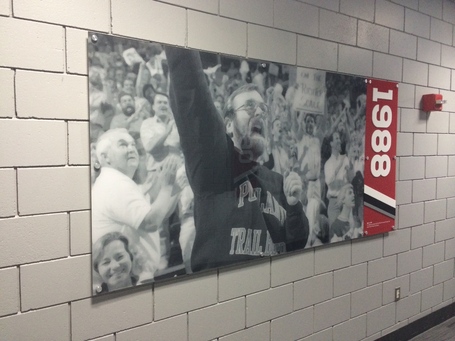 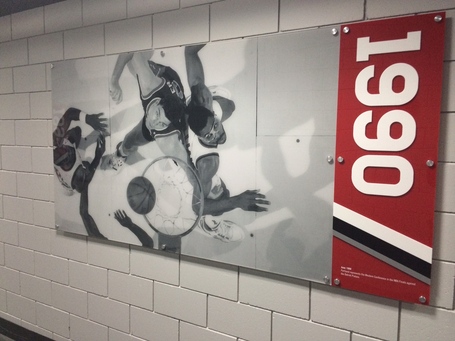 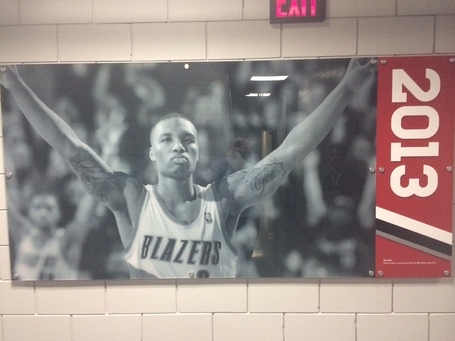 Well, it's always good to get a win. You try not to be disappointed by not playing as well as you wanted to. Offensively we were good when we needed to be. The stretch of games playing teams with a lesser record is apparently for us to get up for. But in the end, it was good to get the win.

He was terrific. He kept us afloat in the first half. He came in aggressive, he looked for his shots. Two threes I thought they did a good job closing out on him and he still focused and made the shots. He seemed like he was much more comfortable tonight than he was in his first game.

I don't know. It's usually a lot of different things. There's never one thing. You give credit to the opponent, making shots, being aggressive. Some of it is us, some of it is them. At this point, I don't want to belabor it. We've got three days off. We've got Cleveland coming in, they're a quality team. I don't want to really belabor the point. We got the game and we've got to move on.

Concerned about being a second half team

Our offensive rebounding -- we don't emphasize it but it's been a big part of our offense. Robin does a really good job of pursuing balls. Obviously we had a height advantage. We didn't emphasize it, it just turned out that way. You take advantage of the strengths that you have.

Robin getting the first two baskets of the second half -- to be honest, I can't remember the plays we ran to start the second half. Him open on rolls, any time he sets a ball screen, he's one of the options to score.

It's the nature of the position. Guards get hit on screens. Pick-and-rolls are a big part of the game. Navigating through the screens is part of it. You don't necessarily want to take the physical punishment but that's part of the game.