A recap of Portland Trail Blazers forward Victor Claver's performance during the bronze medal game against Croatia at the 2013 EuroBasket tournament in Slovenia.

France beat Spain in the semifinals on Friday, advancing to the gold medal game against Lithuania on Sunday, which they won. Spain faced Croatia for the bronze on Sunday. Here are links to previous recaps...

Let's get on with a recap of Sunday's action.

After winning gold at the 2009 and 2011 EuroBaskets, Spain settled for bronze after blowing their semifinal game against France down the stretch.

Bojan Bogdanovic finished with 22 points, four rebounds and one assists to lead all scorers. Roko Ukic added 12 points in the loss.

The word of the day for Claver was "busy."

Bronze medal games often feel a bit like pick-up games when compared to the intensity of the gold medal game, as teams often loosen up the strict discipline and coaches often loosen up their rotations. Spain got in plenty of highlights during this game and they won going away, thanks to a strong night from Lllull, who hasn't played much during the tournament.

This was a nice way for Claver to close his EuroBasket, and it encapsulated his experience in Slovenia. Tasked with playing the power forward position against a physical Croatian team, Claver took his lumps, blocked some shots, drew a bunch of fouls, worked hard on the glass, and was rewarded for all of that effort and all of those elbows to the chest with a nice stat line. His contributions aren't always measured in points/rebounds for Spain, but here he had his highest scoring game of the tournament, a nice consolation prize during what amounted to a consolation game for a Spanish team that is used to taking home EuroBasket gold.

Again, Claver was busy with a capital "B" so I'll try to boil things down as much as possible.

He got off to a very bumpy start. He gave up a basket in isolation in the post, he missed a right angle three, he dropped a pass from Marc Gasol and nearly lost it out of bounds, he missed a left baseline jumper, he gave a shoulder check foul to stop the break following that miss, he tried to help but couldn't stop Bogdanovic from dunking past him, and he got beaten by Ukic for a basket. The Croatians are tough and Claver looked a bit over-matched physically, at least to start. He did break up that long, rough stretch with a nice block of Dario Saric at the rim. Claver and Saric went back and forth all night in a match-up that will surely be replayed in future European competitions for years to come.

Although he did hit a left corner three during the first quarter, things really turned for Claver with his second block shot, an emphatic smash that we're used to seeing from someone like DeAndre Jordan. Croatia recovered the ball and wound up getting free throws on the second effort, but the play caused one of the ESPN3 broadcasters to utter a phase that I'm not sure has ever been said before: "Claver was up so high that he almost hit his head on the rim!"

The bouncy play gave Claver a little bounce to his step, and he started getting more aggressive going inside on offense. He drove hard to the baseline and drew free throws, even though the shot he threw up was wild. He then went way out of his normal comfort zone (bronze medal game, remember) to hit a turnaround jumper from the right elbow. The energy just stayed high, as Claver first drew a foul on Saric while defensive rebounding, earning bonus free throws, and then earned more free throws after he followed up a wild play in transition by tracking down a blocked dunk and going right back up with it.

Spain methodically pushed out its lead in the second half, and Claver just kept steadily working. One of his best moments of the night came on a simple defensive rebound, as he turned to whip an outlet pass to Ricky Rubio, who was at midcourt. Rubio then pushed it ahead to Llull for a basket at the rim. He had another nice look to Gasol on an entry pass from the wing; Croatia was forced to foul to stop that lay-up attempt. Claver kept battling with Saric and the other Croatians on both ends, and that seemingly endless struggle finally took a brief reprieve when Claver found himself wide open for an alley-oop pass from Rudy Fernandez. H tried to get cute and finish it with one hand, and the ball bounced away (bronze medal game, remember).

In the fourth, Claver found a bucket on an offensive tip in of a Gasol jumper, and he earned more free throws by shaking free on the block, pump-faking and getting a defender up in the air as he went up for a lay-up attempt. He took one last trip to the foul line -- he shot nine-for-10 on free throws on the night -- after he tried to put a Croatian on a poster in the game's closing minutes. On the other end, he tied up Saric by blocking him from behind after getting beaten for an offensive rebound. That play wound up forcing a turnover.

Other than grabbing a defensive rebound in traffic, losing a hard pass from Gasol out of bounds, and allowing Luksa Andric to finish a basket past him, that was it for Claver's night. Most of the fourth quarter was garbage time, even though the Croatians refused to give up without a fight.

Here's the Fan Shot of the game via the ESPN3.com broadcast. 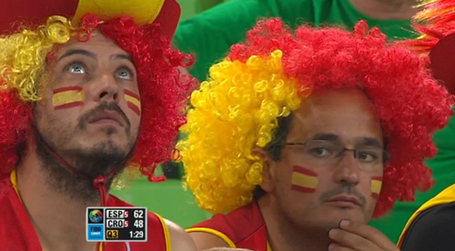 In the spirit of soccer write-ups, we'll hand out match ratings, taking into account individual expectations for both Claver and Batum. For Claver, we'll use a 1-10 scale calibrated as such: 1 = passive, invisible, losing his match-up; 5 = doing his job; and 10 = career night.

Against Croatia, Claver earned an 8. Although his point total jumps off the page -- and he certainly worked hard to earn all those free throws -- Claver gave back some points on the other end. Still, he deserves full credit for his overall determination and he was able to take home a few highlight blocks to show for his work.

Time to tally up Claver's rankings from the tournament. They went as follows...

That rounds up to a final EuroBasket grade of a 6, which puts Claver slightly above the "doing his job" standard we set for a 5. He earned an average of a 6.7, which rounds up to a 7, during the final knockout round of the tournament.

In general, I thought this was a very positive and productive tournament for Claver. Prior to Slovenia, he hadn't had much of a role for Spain, and here he was being asked to do a lot as a starting power forward. At times, he was definitely overwhelmed from a stretch, size and length perspective, but he showed a lot of positive indicators: he really worked to establish rebounding position, he understood spacing and match-ups on the defensive end, he was comfortable extending his defense to the perimeter and staying straight up in the post, and he played within himself on offense.

The Spanish coaching staff will certainly look at Claver and say, "That guy did his job, and probably did more than we could have hoped for."

Will this experience translate to the NBA? That's another question entirely. At first blush, it would seem as if a lot of the work he did in the post -- on both ends -- simply won't be sustainable on a night-to-night basis against NBA athletes. This season, Claver faces a tough go at either forward position when it comes to earning minutes, and his lack of outside shooting is going to continue to hold him back. It's important to realize when looking at his final three-point shooting numbers just how many of those misses were open or wide open looks. He simply must do better or that's going to be the ceiling factor.

The No. 1 takeaway should be this: watching Claver in this tournament was (mostly) a joy. He waded out into deeper waters and was still able to find his footing. It was a night-and-day difference between his non-factor role in the 2011 EuroBasket, and he made a strong case for rotation minutes during next summer's 2014 FIBA World Cup. He can be a really nice No. 5 guy for that team, and it's a role they often need with so many scoring bigs and eager perimeter shooters on their roster. His minutes will get cut when Pau Gasol and Serge Ibaka are back in the fold, but he deserves more than just mop-up duty.