A recap of performances by Portland Trail Blazers forwards Nicolas Batum and Victor Claver during Game 10 of the 2013 EuroBasket tournament in Slovenia.

France and Spain faced off in the semifinals on Friday. Here are links to previous recaps...

Let's get on with a recap of Friday's action.

I'll remember this semifinals -- another exciting chapter of one of international basketball's fiercest rivalries -- for two reasons. First, because it's hard to believe Nicolas Batum will ever again do this little on a basketball court and still feel total euphoria afterwards. Second, because it was a contest in which both teams, so desperate to win, seemed unable to do anything down the stretch to make those wishes come true.

Quick recap of the gameflow: the two teams played a tight first quarter; Spain pushed out to a double-digit lead in the second quarter when France's offense stayed cool; France pulled back into it in the second half with overall excellence from Tony Parker (32 points and six rebounds) and some timely three-point shooting; the trio of Rudy Fernandez, Sergio Rodriguez and Marc Gasol kept Spain clinging to a lead down the stretch of the fourth quarter; and then all hell broke losoe, allowing France to sneak away with the upset.

What do I mean by "all hell broke loose?" Here's a rundown of the mistakes, miscues, poor decisions and regrettable plays from the final minute of regulation and overtime. Again, all of these plays occurred in the final six minutes of a game that was as tight as could be.

OK, that's the full list. It includes 16 (!!!!) items from just the final six minutes. What an absolute mess. France went running up the court when they finally secured the victory, and Batum enjoyed a nice moment, hugging his mother, who was seated in the front row. After falling short against Spain so many times in recent years, the French surely weren't concerned about whether they had earned the victory, or whether it had been given to them. Still. Man, oh man.

Quickly, some thoughts on both Batum and Claver.

Batum's night was totally derailed by foul trouble. He received two in the game's first six minutes and had to sit for an extended period of time. He received his third less than four minutes into the third quarter and had to sit again. His first foul was an obvious push off on Ricky Rubio while trying to drive on the perimeter; his second foul was a dumb one while Calderon was shooting a jumper; his third prevented a Claver lay-up.

On virtually any other night of this tournament, Batum's absence due to fouls would have been a death blow, as France simply needs him too much as a secondary scoring option. In this game, the French managed to survive because, as the old joke goes, Parker and Batum combined to score 35 (the latter chipping in just one three-pointer).

This just wasn't a very good night all-around for Batum. He forced a pass early into a pack of defenders that resulted in an easy steal. He was beaten off the dribble by Calderon (a tough cross-match, to be sure) on two occasions. The first ended with a Calderon lay-up and the second ended with an easy dish to Fernandez for a dunk. He couldn't seem to find a way to make an impact on the boards on either end, and I don't think he made a single aggressive move off the dribble all night. His best offensive plays were passes: a nice touch pass to Diaw that drew a foul and free throws, and a nice entry pass to Diaw that set him up for a reverse lay-up.

He did save the evening with his late play. His only made basket came at the four minute mark of the fourth, a wide open three from the left corner. He also made at least three nice defensive plays, deflecting a pass out of bounds, forcing the shot clock violation on Gasol (mentioned above), and coming from behind Gasol to deflect an entry pass and force a turnover (also mentioned above). Throughout the final sequence, he did well to shadow Fernandez, although the Spanish guard beat himself with his thoughtless shot selection.

Batum's late turnover (mentioned above) and his lack of any offensive impact still kept his late-game play from being "all good." Put it this way: if France loses this game, he's at the very top of the list of goats.

Claver's stat line was similar to Batum's but his night wasn't nearly as nightmarish.

He got on the board early with a lay-up set up by Rubio in transition, after Diaw turned over the ball at midcourt. That would prove to be his only basket of the evening; his only other point came when he split a pair of free throws in the third quarter after Batum was forced to foul him. The lack of offense wasn't a huge deal; he's Spain's fifth option and that really shows in a high stakes game like this.

His general effort level on defense was very good and he had some interesting assignments. His mark was Diaw, who finished with 8 points and 8 rebounds, and Claver did well to make his bigger-bodied and more-imposing opponent work for everything. He also regularly found himself switching out to defend guards, including Parker, and he showed nice fundamental posture and footwork while applying containment.

His positive plays included: harassing Mickael Gelabale on the drive, resulting in a bad pass and a turnover; forcing a miss from Parker in transition by contesting without fouling; going straight up to defend Florent Pietrus in the post, causing him to miss short; nearly tapping in a diving, offensive rebound at the regulation buzzer that would have been the game-winner; deflecting a Batum backdoor pass out of bounds to prevent a potential lay-up; and aggressively defending Parker on the switch in overtime, and then recovering to get a defensive rebound.

His negative plays included: a missed stepback three early in the game with a hand in his face; a bad foul on a jump-shooting Parker, with the collision coming way after the shot release; and the crucial airball in overtime (mentioned above), which required him to foul Parker hard in transition to stop play.

In sum, Claver didn't quite win his match-up but he did a number of helpful things. He was absolutely the wrong player to take that three-pointer at that point in the game -- down two with 46 seconds remaining in overtime -- but once he decided to pull the trigger, even after thinking twice or three times about it, he has to do better than that.

Here are the fan shots of the game via the ESPN3.com feed. 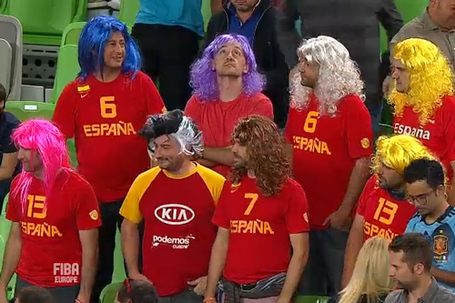 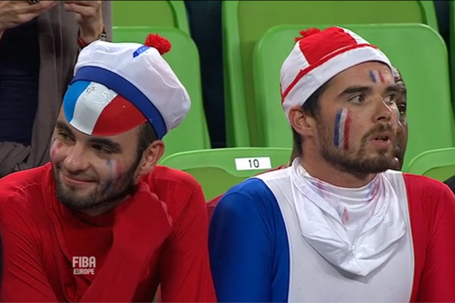 Against Spain, Batum earned a 3. Without the two possession-ending defensive stops late, Batum would have earned a one. Sometimes all that matters is a win.

Against France, Claver earned a 4. Spain didn't lose because of Claver's airball, they lost because they totally melted down offensively at the end of regulation and in overtime. His miss was just one of many, many blown possessions (see list above). He played decently overall but didn't have a major impact.

France (7-3) moves on to the gold medal game where they will face Lithuania (8-2) on Sunday. Lithuania beat France, 76-62, in the second round of EuroBasket play.

Spain (6-4) will play for bronze against Croatia (8-2) on Sunday. Spain blew out Croatia in its EuroBasket opener.