A recap of Portland Trail Blazers forward Victor Claver's performances for Spain against Serbia in Game 9 of the 2013 Eurobasket tournament in Slovenia.

Spain and France have both advanced to the tournament's third round, a knockout tournament that will crown a champion. Here are links to previous recaps...

This is what you might call a "Big Brother" game. You know, backyard hoops and the eldest sibling decides it's time to stop messing around, pummeling his younger family members into submission.

Spain hasn't been as shaky as France but they underwhelmed a bit in the first two rounds. Those questions were immediately forgotten thanks to their dismantling of Serbia. Tupac Shakur once asked, "How do you want it?" Spain looked Serbia in the eyes and asked that same question on Wednesday, scoring from outside, scoring from the inside, scoring in transition, and just doing whatever they darn well pleased. Sergio Rodriguez had the ball on a string and a bounce in his step. He tallied a game-high 22 points and four assists; Rudy Fernandez chipped in 19 points and four rebounds.

Marc Gasol had a "quiet" seven points and six assists but get a load of this from YouTube user FIBAEuropeTV...

Not really that quiet, I guess.

As for Victor Claver, he performed admirably. Given that the Serbian frontline has some size and beef between Nenad Krstic, Rasko Katic, Djordje Gagic and Vladimir Stimac, it was reasonable to assume that Claver's role as an undersized power forward would be put to the test. He did just fine: Spain won the rebounding battle, 42-33. Claver didn't register that many boards himself, he did well to consistently account for a man, freeing up Spain's guards to track down the caroms.

Claver played the entire first and third quarters and the opening portion of the second quarter. His individual plus-minus number tells the story here: Spain's starters just demolished the Serbians. Spain ran out to an 8-0 lead, a 17-2 lead, and they were up 21-5 after one. They did it early by getting out in transition, but their disciplined team defense also limited Serbia's good looks. The Spanish played hard and smart, and the were in complete command from tip to buzzer.

I was a little bit surprised by how long Claver stayed on the court -- given that Spain was up by 40 points in the third quarter -- but he did well not to let up. Perhaps the Spanish decided to pretend this game was close to help prepare for the semifinals and a potential gold medal game.

Here's a quick rundown of Claver's night: Ricky Rubio got a steal and fed him for a two-hand dunk in transition, a slam he finished so authoritatively that he nearly crashed to the court; Claver threw the second pass on a 3-on-2 fast break that Fernandez caught while in the air and converted into a short-range banking alley-oop jump shot, if that makes sense; Claver pressured a ballhandler into a rushed pass that became an easy steal; he tapped out a defensive rebound in traffic; he held his position while defending Katic one-on-one in the post, helping force a miss; he established deep post position to start the second half, receiving an entry pass and turning towards the middle to knock down a right-handed hook shot; he threw a nicely-timed entry pass to the basket side of Gasol, who immediately drew a foul to stop the play; he collected a shovel pass from Gasol and knocked down a right corner three; he received a dump pass from Gasol and was fouled during a dunk attempt, making both free throws; he dug down from the weakside on defense and blew up an isolation offense sequence with a strip, but Spain couldn't retain possession.

So, as you can gather, lots of little things, some moments where he turned hustle into opportunity, and good general all-around awareness.

The downside to his night was his shooting touch, which was shaky once again. He missed a left angle three, a right baseline jumper, a right angle three and a long two from the right baseline. He badly forced one shot after he got stuck on an aborted drive attempt; he decided to launch an off-balance mid-range shot with his body at a bad angle towards the hoop for no good reason.

That was his one real mistake of the night. He did get scored on late in the third quarter on a one-on-one play in the post. The feeling on that one was genuine surprise, as the Serbian big men, as a group, never established themselves.

That was that. Super easy. Next up: Claver and Spain will get Nicolas Batum and France in a semifinal on Friday. After this performance, and with the recent history between the two teams in mind, Spain should enter the game as the clear favorite.

Here's the fan shot of the game via the ESPN3.com feed. 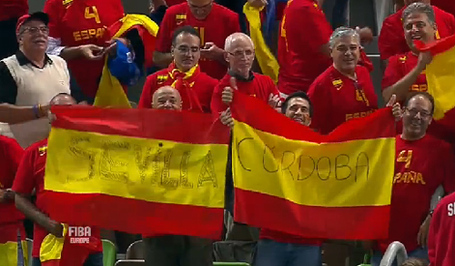 Against Serbia, Claver earned an 8. He more than did his job but he needed a better shooting night to climb higher. He's missing open shots.

Spain (6-3) will face Nicolas Batum and France (6-3) in the semifinals on Friday.