A recap of Portland Trail Blazers forward Nicolas Batum's performance for France against Slovenia in Game 9 of the 2013 EuroBasket tournament in Slovenia.

Spain and France have both advanced to the tournament's final stage and are in the midst of a knockout round that will crown the champion. Here are links to previous recaps...

France spent the first two rounds of EuroBasket blowing out weaker opponents and wilting in tighter moments, but Wednesday they played their best game -- by far -- in front of a revved up crowd to send the host country packing to the consolation bracket.

The ESPN3 broadcasters reported that Nicolas Batum guaranteed a victory before the quarterfinal game, and while he didn't personally deliver on that promise, he did everything that France needed him to do to get the victory. Tony Parker led the way with a game-high 27 points, but Batum emerged as France's second scoring, attacking option on offense and he did plenty of pestering on the other end. He had his fingerprints on the late-game action too.

Slovenia's path to victory required big nights from Goran and Zoran Dragic, who have been one of the most exciting shows at EuroBasket, and big numbers from behind the arc. Here, the brothers combined for 30 points but shot a combined 1-for-9 from deep; Slovenia on the whole managed to shoot just 6-for-25 on three-pointers, not nearly proficient enough to serve as an equalizer for France's superior talent.

At times, this was a bare-knuckle brawl between Batum and the Dragics, especially when Slovenia had the ball. Both sides entered the match-up ferociously and both landed blows. It was clear Batum saw stopping whichever brother he was guarding as his mission in life on this night. He over-played aggressively, he fought over pick after pick, he extended his defense out an extra step or two and he shadowed them carefully on drives.

And yet still the Dragics had their moments. In the first half, Zoran blew by Batum off the dribble, took light contact, and finished the and-one hoop. In the second half, Goran lost Batum on the perimeter and launched into a solid highlight dunk. Zoran also manhandled/side-bumped Batum out of rebounding position to create a point-blank look at a putback (he somehow missed).

Those plays -- and Slovenia's second-half mini-runs -- seemed only to excite Batum's subsequent action. He dished out just like he received. He opened France's scoring with a soaring not-quite-dunk tip-in. He worked an in-and-out two-man game with Alexis Ajinca and Boris Diaw that was disrupted only by multiple first-half Slovenia fouls. He hit the deck in pursuit of an offensive rebound in traffic, finally getting the ball back seconds later and finishing the play with a pretty finger roll. In the second half, he batted out an offensive rebound and then did what Marcus Camby and Tyson Chandler can't: he got the ball right back and knocked in a left angle three.

Aside from that trey, his jumper wasn't cooperating all night, but he kept pressing. He drew two free throws on a pull-up at the free throw line.

Over the game's final seven minutes, Batum had three crucial offensive plays. These weren't technically game-saving or game-winning plays, as France steadily held a lead down the stretch, but all three were very important in keeping Slovenia at bay. Keep in mind: the home crowd was jumping up and down and chanting during the second-half. The collapse potential here was very real.

Batum checked in with a little less than seven minutes to go in the fourth and immediately found himself in transition thanks to a Boris Diaw steal. He went straight at the rim, side-stepping Goran nicely to put up a running finger roll before the two players contacted each other. The ball danced around the rim and went in, while Goran was whistled for the foul. Batum cashed in the free throw and France's five-point lead was now eight.

On the next French possession, Batum had arguably his prettiest assist of the tournament, deftly finding Nando de Colo with a soft touch pass as he sneaked baseline for a reserve lay-up. This pushed France's lead to ten and forced Slovenia to call a timeout.

The complexion of the game didn't change much -- although the intensity did increase even further -- over the next five minutes. When the clock got under two minutes, Batum made his third key play, which started when he deflected a pass on defense. He collected the ball and wasted no time getting out in transition, capping the pick-six with a dunk. The sequence pushed France's lead back to nine with 90 seconds left; that was, more or less, the dagger.

This was timely stuff and Batum was pumped up. It should be mentioned that he also had a fully-outstretched block of a Goran drive late in the fourth too.

France now advances to the semifinals where they will face Spain, their biggest rivals. That game should be a doozy.

A couple of other stray notes...

One: Batum was noticeably in "kill mode" with his jumpers and he was pressing slightly, although not totally forcing the issue. As a result, he had multiple really ugly misses.

Two: He did well to play through some inconsistent officiating. Early in the game, he drew a foul on a drive in which he was barely touched and simply lost the ball awkwardly on the way up. A few plays later, he was clubbed out of the air while attempting a poster dunk, only to see that one go as a no call. Some bumps were called as he played defense, others weren't. The officiating wound up not being a major factor down the stretch. Still, it was good to see Batum avoid getting sidetracked considering the hostile crowd conditions.

Three: With 1:19 remaining in the fourth and France leading by nine (moments after the dagger dunk mentioned above), Batum turned the ball over in the backcourt while under pressure. He seemed to think he was fouled but the referees didn't react as if it was even close. Had it been, say, a two-possession game at the time, the error would have been horrible. He really dodged a bullet on that one.

Four: Batum's other turnover came on an early play in which Zoran fully laid out to intercept a pass to the baseline. Man, I'm going to miss the Dragics.

Here are video highlights from the game via YouTube user FIBAEuropeTV.

This video has a brief post-game interview with Batum. 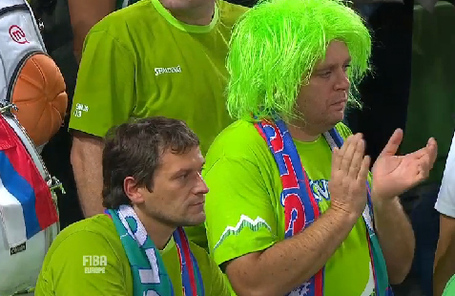 In the spirit of soccer write-ups, we'll hand out match ratings, taking into account individual expectations for both Claver and Batum. For Batum, we'll use a 1-10 scale calibrated as such: 1 = passive, invisible; 5 = winning his match-up in unspectacular fashion; and 10 = NBA All-Star level play.

Against Slovenia, Batum earned an 8. He wasn't dominant from start to finish but he clearly raised his game when it mattered at the end. Batum was key in slowing the Dragics and he mostly avoided the stand-and-watch stuff on offense. This was close to a 9 but the shot selection cost him.

France (6-3) moves on to the semifinals where they will face Claver and Spain (6-3) on Friday.