A recap of Portland Trail Blazers forward Victor Claver's performances for Spain against Italy in Game 8 of the 2013 Eurobasket tournament in Slovenia.

Share All sharing options for: Blazers F Victor Claver, Spain Lose To Italy In OT, 86-81, But Advance To EuroBasket Quartefinals

Spain and France have finally completed the tournament's second stage. Starting Wednesday, a knockout round will crown the champion. Here are links to previous recaps...

Let's get on with a recap of Monday's action.

This was one of those crazy "only in EuroBasket" games, a nail-biter that saw unusual refereeing, a 17-4 Italy run in the final five minutes of regulation, a buzzer-beater to force overtime, and very few stoppages of play during all of it because the international game has fewer time outs.

As Italy chipped away slowly down the stretch, getting a huge break when Jose Calderon was whistle for a foul during a three-point attempt with Spain up four and 1:19 remaining, Blazers forward Victor Claver sat and watched. After starting both the first and third quarters again, Claver left with Spain up eight and 2:21 remaining in the third. He did not play for the entire fourth quarter and he didn't return until Spain was down six with 2:36 remaining in overtime.

Why? Again, with the Spanish, who knows. Claver wasn't playing great on either end but Spain's other forwards -- Alex Mumbru and Fernando San Emeterio -- had nothing going in particular either. Among the three, Claver scored the most points, grabbed the most rebounds and shot the best percentage despite playing the least number of minutes. He was also the only one of the three to register a positive plus-minus on the night. This recitation of facts isn't totally damning (all three players were pretty much inconsequential) and it's not meant as a condemnation of the Spanish coaching staff, but the handling of Claver was curious, particularly because Spain was getting beaten soundly on the boards by a smaller Italy team. Claver has been Spain's second-leading rebounder at EuroBasket.

Much like France on Sunday, Spain was not playing for their tournament lives here, as they had already qualified for the final knockout round. Instead, they were playing for a particular seed within the knockout bracket. By losing, Spain wound up as the No. 4 seed in Group F. Still, Spain was definitely playing for the win against Italy -- look no further than Marc Gasol's 32 points and 10 rebounds in 37 minutes -- and they really should have had it.

Claver's individual night wasn't very showy. He did open the scoring for Spain by knocking down a right-angle three-pointer nearly four minutes into the first quarter. His other major offensive sequence in the first half saw him draw a foul on Detroit Pistons forward Luigi Datome while attempting a drive on the perimeter; the referee ruled that Datome was moving during the contact, although it could easily have been a charge. With Spain looking to force-feed Gasol, who was hacked over and over, and the Spanish guards living their typical care-free existences, Claver spent most of the game on the outside looking in offensively.

On the other end, his best play came just before halftime, as he registered a two-hand, volleyball style block underneath the hoop just before time expired. A bit earlier, he collected a deflection and got a fast break going; that play ended with Rudy Fernandez finishing it on the other end.

His third-quarter contributions were mostly of the hustle variety: he snared an offensive rebound after a missed three; he was stripped of a defensive rebound but came back to contest a follow-up shot and recovered the ball; and he worked for an offensive rebound, missed the putback, but got a second-effort tip that eventually ended with Spanish possession. His only second-half scoring: a pretty two-hand dunk after he leaked out in transition. Fernandez found him slinking along the right baseline and he made no mistake once he was airborne.

By the time Claver came back during overtime, after sitting forever, momentum had reversed and Spain was in desperation comeback mode without much time to get it done. Being thrust into this frantic environment did not suit Claver well. He was fouled just seconds after he checked in as he attempted a lay-up; despite minimal contact, he was unable to finish what would have been a key and-one opportunity. To make matters worse, he then missed both free throws. On the ensuing possession, Allesandro Gentile drove past him to the right, turning the corner to the hoop and getting a key bucket to put Italy up eight. Gentile led Italy with 25 points and seven rebounds on the night.

That was a back-breaking turn of events but, to Claver's credit, he didn't cave. Unfortunately, there was still more bad news to come. He managed to tap out a defensive rebound and start a transition opportunity, but Spain couldn't hit an open three to complete that sequence. Soon after, Claver burst out in transition and looked to throw down a poster, only to have Datome come out of nowhere for an incredible block at the rim. Here's a snap shot from the ESPN3.com feed. 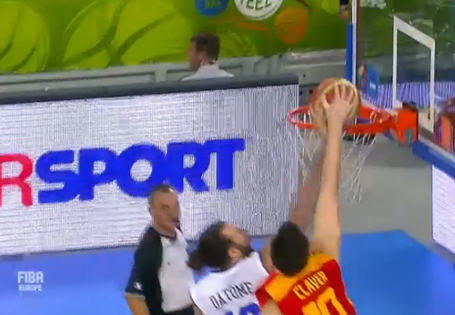 Given that Claver's dunk would have cut Italy's lead to three with a little under a minute to play, Datome's block qualifies as one of the best plays to date at EuroBasket. This, mind you, after he sent the game into overtime by freeing himself from Ricky Rubio on an inbounds play and hitting a leaner as time expired in regulation. Datome "only" posted 11 points and 4 rebounds but his contributions couldn't have been more timely.

One last moment of frustration that wound up symbolizing Spain's late collapse: Claver had the ball slip completely out of his hands as he tried to launch a three-pointer with four seconds left. He was assessed a turnover.

Here's the fan shot of the game via the ESPN3.com feed. 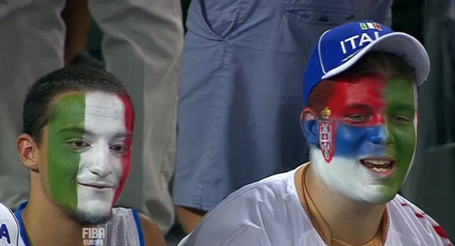 In the spirit of soccer write-ups, we'll hand out match ratings, taking into account individual expectations for both Claver and Batum. For Claver, we'll use a 1-10 scale calibrated as such: 1 = passive, invisible, losing his match-up; 5 = doing his job; and 10 = career night.

Against Italy, Claver earned a 3. His impact was subdued at best and the nature and timing of his minutes really didn't help matters.

Spain (5-3) moves on to the final round of the tournament and will play Serbia (5-3) on Wednesday.

Should both Spain and France prevail on Wednesday, they will face each other in the semifinals on Friday. The other side of the bracket includes Croatia, Ukraine, Lithuania and Italy.