A recap of Portland Trail Blazers forward Nicolas Batum's performance for France against Serbia in Game 8 of the 2013 EuroBasket tournament in Slovenia.

Spain and France both advanced to the tournament's second stage. From there, a knockout round will crown the champion. Here are links to previous recaps...

Let's get on with a recap of Sunday's action.

EuroBasket's format is insanely and unnecessarily confusing, which is why I have delayed using specifics to size up where France and Spain stand in relation to the rest of the field for as long as possible. On Sunday, France played its final game of the second round. The game both mattered and it didn't: France had already qualified for the knockout stage so a win would only have impacted their seeding and theoretically ensured an easier path to the medal games.

Batum played his most minutes of the tournament against Serbia and opened the game with a determined approach. The same could be said for France, generally, as this loss wasn't a complete no-show. The body language and communication between coaches and players both indicated that the French are frustrated by their up-and-down play, and they have consistently struggled to take control of tight games when necessary. Here, the Serbians both out-worked and out-shot the French, who seemed surprised that their opponent was so well-equipped to withstand their opening burst of intensity. Serbia led from roughly the two-minute mark of the second quarter on, parrying all French comeback attempts.

"I was glad to see Nicolas Batum get that rebound because I didn't even know he was out there," the ESPN3.com commentator said during the third quarter. It was a harsh, but fair, barb. During six-plus third-quarter minutes, Batum's only box score contributions were a missed three-pointer and the defensive rebound that the announcer mentioned; although Serbia's lead didn't change all that much from the start of the third to the end, the stretch felt like France's best opportunity to really pull itself back into a position of strength. When Nemanja Bjelica hit a sideways-running, broken play prayer to beat the third quarter buzzer by a few tenths of a second, it seemed clear that this was officially not France's day.

The second-half sense that Batum wasn't doing much came from, in part, a comparison to his first-half play, which impacted the game even if it was all a bit hurried. His first three shot attempts were all good looks: he missed a running lay-up early, he was the victim of a bad no-call when he was bumped putting up a transition lay-up, and he came hard across the middle to put up a turnaround, only to shoot it with a bit too much power. All three were proactive plays and fairly high-percentage attempts; all three went for nothing.

His other first-half offensive efforts vacillated between great and not so great.

Positives: he got his first points with a reaching tip-in in traffic; he curled hard through the paint, executing a great fake before finding a cutting Boris Diaw wide open on the left baseline for a dunk; he hit a drifting left corner jumper to start the second quarter; he earned a foul by taking a shoulder on the drive, and went on to split the free throws; and he converted an entry pass by spinning to finish a lay-up while drawing a foul. He celebrated that last one by pounding the stanchion with his head, but he wound up missing the free throw.

Negatives: he threw a high screen-and-roll pass through the legs of his big and then couldn't prevent a dunk going the other way in transition; he missed a jumper after a fancy (by his standards) crossover move; and he bricked a long two.

Defensively Batum had some quality moments. He opened by really working on the perimeter against Bogdan Bogdanovic, moving his feet and fighting over screens. Much of the early play was dominated by a battle in the middle between centers Alexis Ajinca and Nenad Krstic. Batum helped out there, teaming with Ajinca to contest one shot and then following that up with a stretching block of a second-chance opportunity. He also got a block on Bogdanovic right at the rim.

The final quarter was mostly frustration for Batum and France. He did hit his only three of the game to open the fourth but he would add only two additional points -- a pair of free throws after he was fouled on a drive -- the rest of the way.

France couldn't catch a break. Batum dug out an offensive rebound only to quickly launch an ill-advised three from the left corner -- chasing some sort of positive momentum -- and miss. Batum got his hand on a great deflection, sending Nando de Colo out in transition. A chasedown block by the Serbians erased that effort. Along the way, Batum was fouled to prevent a pair of opportunities by the physical Serbians. Tony Parker, who finished with just 10 points, was hit with a crucial charging call on a transition lay-up attempt that easily could have been an and-one. France was down seven at that point and it could have been four; instead, Serbia immediately hit a three on the other end and the six-point swing made it a 10-point game in a matter of seconds.

That was all she wrote. Two more rebounds and a frustration turnover in the closing seconds completed Batum's night.

The sense from watching these games is that the French are starting to get anxious that they aren't consistently playing at a high level when they face good competition. They've won their share of blowouts but they have also shrunk repeatedly when under duress. That remains a red flag as EuroBasket's wheat is just about separated from the chaff. 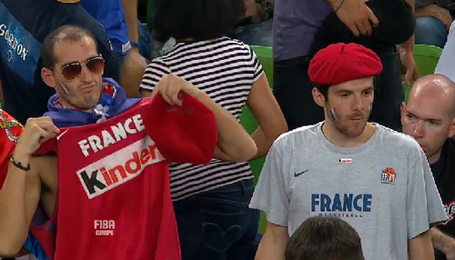 Against Serbia, Batum earned a 4. This wasn't a complete performance by Batum but he didn't fall flat on his face either. Everyone from Parker on down will look at this as a game to be forgotten. Credit the Serbians: Krstic (19 points and four rebounds), Bogdanovic (14 points and five rebounds) and Golden State Warriors 2013 first-round pick Nemanja Nedovic (17 points and three rebounds) all played very well.

France (5-3) moves on to the final round of the tournament as the No. 3 seed from Group E. They will play Group F's No. 2 seed on Wednesday. Their exact opponent will be determined by the results of Monday's Group F games.