A recap of Portland Trail Blazers forward Victor Claver's performances for Spain against Finland in Game 7 of the 2013 Eurobasket tournament in Slovenia.

Let's get on with a recap of Saturday's action.

Well, we've got some good news and some bad news.

Good news: After a strong performance against Greece on Thursday, Victor Claver returned to the starting lineup for Spain on Saturday, enjoying another nice all-around game against Finland. Bad news: The archived video of the game cut off Claver's entire first quarter shift, which included four of his 12 points, two of his seven rebounds, his only steal and one of his two assists. Welp.

The first impression for those of us picking up the action in the second quarter was poor Claver finding himself unable to stop the Finnish from raining three-pointers over his head. This game was closer than the final score indicates, as it was just a 15-point game with a little under six minutes remaining. Petteri Koponen, whose draft rights were held by the Blazers for a number of years, led his side with 17 points, including four three-pointers. Koponen let one fly over Claver during a strong second-quarter stretch for the Finnish and he wasn't the only one. Eventually the long ball stopped hitting for Finland and the Spanish took care of business when push came to shove.

Otherwise, Claver's second-quarter action included: a hard take that required a foul to stop him; a smooth entry pass to a cutting Marc Gasol, who finished with a turnaround jumper; and an active second-effort play on the offensive glass in which he missed a putback before Rudy Fernandez cleaned it up with a tip-in of his own. Claver's only points of the second quarter came on a left corner three. He set his feet nicely, caught a pass from Jose Calderon in rhythm, and knocked it down.

Starting again in the second half, Claver continued to look like he was hyped up on 5-Hour Energy. I'm not sure whether he gets full credit for breaking ankles on a perimeter drive, as his Finnish defender was tripping all over himself, but we can give it to him if we're being generous. Credit or no, Claver went to the hoop hard as his defender went to the ground. His drive from the left angle to the left baseline ended with him coming back towards the center of the court, and he finished the play with an elusive, swooping righty lay-up.

Looking to keep his mojo going, Claver lined up a right corner three about a minute later, but missed. From there he went back to work. A few possessions passed before he grabbed a defensive rebound in traffic and quickly outletted to Sergio Rodriguez, who unfortunately couldn't complete the play on the break and turned the ball over. The two sides exchanged hoops and, just before he subbed out for rest, Claver collected an entry pass from Fernandez, executed a series of fakes, and drew a foul that prevented a lay-up. He split the two free throws.

Claver then sat for the next 10 minutes of game action. When he finally returned, with three minutes remaining in the fourth, Spain was up by 18 and the result was in hand. Claver completed his scoring for the night with a hard baseline drive to his left that he finished with a right-handed lay-up on the far side of the rim. It wasn't a crazy, hanging Dr. J style up-and-under but it got the job done.

The last meaningful moment: Claver worked hard to get an offensive rebound on a missed free throw, only to lose the grip on the ball in a little skirmish. He was assessed a turnover on the play.

This wasn't the most spectacular effort we've seen from Spain and it's probably best described as a workmanlike win. They will be happy with their defensive results down the stretch -- they won the fourth quarter handily, 23-12 -- but they won't throw a party given the inferior talent level on the Finnish roster.

Here's the fan shot of the day via the ESPN3.com broadcast. 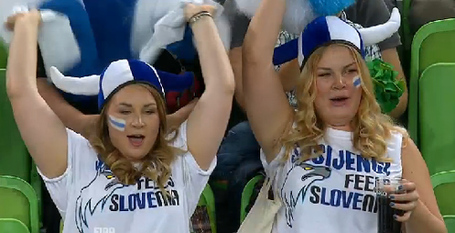 Against Finland, Claver did not receive a grade. Chalk this one up to the technical difficulties mentioned at the top. Thanks to his spunky play and nice offensive moments, Claver earned a solid seven during the portions that were available for viewing. Given that some of his best moments seemed to come early, though, assigning a grade on an incomplete tape just didn't seem like the right thing to do. Hopefully this will turn out to be a one-time glitch.