A recap of Portland Trail Blazers forward Nicolas Batum's performance for France against Latvia in Game 7 of the 2013 Eurobasket tournament in Slovenia.

Let's get on with a recap of Friday's action.

This was the Nicolas Batum everyone's been waiting to see.

France caught a great break on Friday. Needing a "get right" game, they drew a Latvia team that was fundamentally incapable of defending the basket area. Couple France's urgency following their loss to Lithuania and Latvia's sieve-y interior and you have a recipe for a high-scoring affair.

Batum was heavily involved in that offensive explosion but he wasn't alone. France shot almost 60 percent on the night as a team, with Tony Parker tallying 23 points and Alexis Ajinca going to work over and over in the post, finishing with 25 points and 5 rebounds.

Even if Batum wasn't a singular star on offense, he was a star -- his list of standout plays is almost too long to run down in fall.

A first-half sampling: he opened with a dunk; got Ajinca going early with a clean entry pass that turned into an assist; he swished a left baseline jumper; he smoothly led a two-on-one fast break and fed Tony Parker for the finish; he cut hard baseline on his way to an easy dunk; he drew three free-throws as he was fouled on the follow-through of a three-pointer; and he directly fed Florent Pietrus for a hoop.

A second-half sampling: he opened with a lay-up after a series of post moves; he hit an absurd, falling putback; he led another fast-break and found Nando de Colo for a lay-up; he made the right read to Boris Diaw for a mid-range jumper; he nailed a pretty right angle three after stepping in hard on the catch; he scored in the lane; and he leaked out to beat a full-court press before dishing to Ajinca for the finish.

I'm probably missing a few highlights in there but you get the picture. Batum was feeling it, he was exploiting Latvia's defensive shortcomings, he was doing it for himself and for others, and he was maintaining his offensive impact throughout the course of the game. Top-shelf stuff.

Batum's misses weren't worth shedding tears over: He missed a jumper early, which caromed off the shot clock; he rushed a tough put-back attempt that didn't go down; and he missed a right angle jumper late. His worst shot of the night was actually the three-pointer on which he drew the fouls, as he was badly off-balance and seemed to be going for Kobe Bryant-type heroics. He was bailed out by the foul, which nicely summed up his luck on the night.

The 11-point victory margin does not reflect how easy life was for France when they were paying attention. At times, France enjoyed a 20+ point lead and they let Latvia back into the game because they decided to get comfortable trading baskets. Latvia made a late push, thanks to a fabulous 28-point night from Dairis Bertans and 11 three-pointers as a team, but they couldn't quite get it close enough to really make France sweat.

The let-up from the Frenchmen was reflected in Batum's performance on defense, which wasn't as overwhelmingly positive as his offensive night. There were nice moments but also some regrettable lapses. His best defensive sequence came when he blew up a possession by getting a deflection on a pass out of a high screen. Latvia scrambled to recover the ball but didn't have sufficient time to get a good shot off before triggering a shot clock violation. His rebounding on both ends was strong, in part because Latvia's lack of strength and true post talent provided a lot more opportunities for impact compared to a team like Lithuania.

Batum and the rest of the French team might have been guilty of overlooking Bertans. Early, Batum was hit with a goaltending call after he tried to block a shot that had already hit the backboard. It was a nice effort play but he was beaten cleanly on the initial drive. Shortly thereafter, Bertans finished a high-flying dunk over the top of a Batum contesting effort. Even though it was clear Bertans was on his way to a good night by that point, Batum didn't close out hard with a hand up when Bertans eyed a three-pointer moments later. Bertans took advantage of the clean look and sank one of his four threes. Then, just before halftime, Bertans beat Batum off the dribble and finished an and-one runner after taking a sloppy, out-of-control foul from Batum. On some of these plays, you simply credit the high-level offense. But, on the whole, this wasn't the type of lockdown performance that Batum can put together.

Towards the end of the game, as France had its foot off the gas pedal, Batum watched as Latvia executed an alley-oop dunk from a baseline inbounds set. That should never happen -- at least not that easily -- and Batum clearly didn't see it coming. The basket didn't affect the outcome, obviously, but it was another moment where his focus waned.

Although Batum didn't register big defensive stats, his major role in France's transition offense should be mentioned again. The guy who turns the steal into a lay-up with quick-thinking and a smart pass is often as important than the guy who comes up with the steal in the first place. The guy who makes those plays at full speed without throwing the ball into the fourth row is very valuable indeed! On Friday, this was Batum's role and he played it well, minimizing the silly errors even though he was playing with a high level of assertiveness. 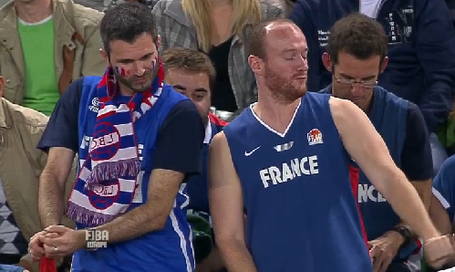 Against Latvia, Batum earned a 9. He clearly earned a 10 on offense and he was a driving force behind France building its large lead. His defense certainly left something to be desired but circumstances helped explain some of the let-ups. This was his best all-around game of the tournament and worthy of his highest rating so far.