A recap of Portland Trail Blazers forward Victor Claver's performances for Spain against Greece in Games 6 of the 2013 Eurobasket tournament in Slovenia.

Let's get on with a recap of Thursday's action.

If Hollywood found itself tasked with pitching this game there's a decent chance they would turn to an age-old tagline: "Victor Claver ... like you've never seen him before!" No question: there was plenty of reason to be excited about Claver's night even though it ended in the worst possible way.

Spain once again started Pablo Aguilar in place of Claver, but it was Claver who wound up playing bigger minutes (24 to 8) and having a much greater impact.

Like Nicolas Batum, Claver has struggled with his shot in EuroBasket play. Entering Thursday, he was just 1-for-9 (11.1 percent) from deep and 5-for-17 (29.4 percent) overall. It helped, then, that his first shot, a right corner three, went down. Claver has been giving good energy throughout most of the tournament but he took things to a whole new level against a big and brutish Greece team. Perhaps some of the credit for that overall play goes to the good start.

Marc Gasol drew three fouls in the first half and, as a result, an undersized and over-matched Spanish frontline tried to patch things together in his absence. Claver was called on for plenty of dirty work and his rebounding total accurately reflects how much weight he was pulling. Early on, he was pushed under the hoop following a free throw, conceding an offensive rebound to the Greeks. The bully stuff stopped there, as Claver got serious about his positioning and leverage time and again, digging in to give himself a chance and jumping high to get his hands on as many caroms as possible.

That work paid off in the first half as he drew two free throws on a put-back opportunity. He gathered the rebound in an unexpected spot and he powered up hard to earn his freebies, which he converted. Later, his diligence was rewarded with a clean basket, as he found himself wind open for an offensive rebound and put-back on the weakside. He took seven points into halftime.

The defensive rebounds came in a flurry throughout, but particularly at the start of the three quarter, when Claver was included in Spain's first five. He grabbed three in quick succession. With the Basketball Gods smiling, he then charged out ahead of a play in transition, hauling in a baseball pass to throw down a one-handed dunk on the move. It was a pretty finish -- high degree-of-difficulty -- and replays showed Greek forward Kostas Papanikolaou (whose rights the Blazers held until recently) nearly blocked the attempt at the rim. Still, Claver found a way to complete the play with strength.

Claver just seemed to be everywhere during this second-half stretch. He dug out an offensive rebound and kicked it to Rudy Fernandez for a left corner three. He blocked a lay-up attempt by Vassilis Kavvadas, securing possession, and then blocked another hard driving attempt by Vassilis Spanoulis moments later. Attention all Vassilisses: not in Victor's house.

This was the hardest, most effective all-around play -- by far -- that Claver has shown during his national team duties. While that's not necessarily a very high bar, Claver jumped way, way over it. No over-thinking, no hesitancy, no politeness. Claver wasn't violent but he was physical. That the contest was very tight throughout -- often a one-possession game during the third and fourth quarters -- made his night stand out from his overall body of work that much more.

During his strong third-quarter stretch, Claver would be whistled for two fouls that came back to haunt him later, including a hard screen that sent Spanoulis to the court. Claver exited the game with about one minute remaining in the third and rested until the seven-minute mark of the fourth. When he reentered, Spain was up 60-56 and hoping to put away the win. Unfortunately, all of his hard work would be spoiled by two questionable calls.

On the first, Claver was whistled for hitting Spanoulis' arm while attempting to tip an offensive rebound. Claver got to the ball first and Spanoulis sold the level of follow-through contact, leading Claver to immediately question the official's decision. With six minutes remaining and the game in the balance, Spain elected to keep Claver in the game despite his four fouls. Less than two minutes later, with the score now tied, Claver drew his fifth foul while defending Yannis Bourousis in the post. Claver got under Bourousis on the basket side and edged him out towards the free throw line as an entry pass came in over the top. Replays seemed to show light contact between the two players although Claver's movement looked like an undercut in real time.

Considering the physical nature of the game, both plays could have easily occurred without a whistle. Needless to say, Claver was incredulous at his early disqualification and the game's momentum turned immediately. In the aftermath of the second call, Greece went on a 13-6 run and that was that. Spain simply ran out of time.

Result aside, you had to feel for Claver. It's easy to imagine that he will be kicking himself -- and the referees-- rather than taking a moment to appreciate his strongest outing in recent memory. Rather than enjoying his progress in the two years since his ineffective 2011 EuroBasket, Claver is surely left wondering what could have been.

Here's the fan photo of the day via the ESPN3.com broadcast. 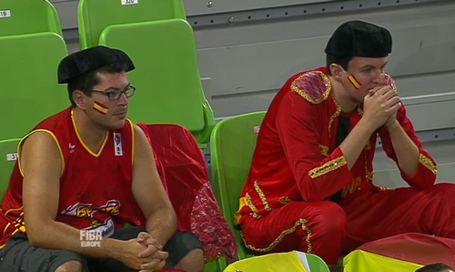 Against Greece, Claver earned a 9. Unlike the man himself, we can take a step back from the game's ending to acknowledge the new heights he reached here. He attempted one wild runner, was beaten cleanly on a drive, and dealt with the late foul issues; other than that, his play was just about perfect considering context and expectations. This would have been a 10 had he been on the court to finish the job.