A recap of Portland Trail Blazers forward Nicolas Batum's performance for France against Lithuania in Game 6 of the 2013 Eurobasket tournament in Slovenia.

One glance at his offensive numbers might lead to the conclusion that Nicolas Batum played another passive game. Nothing could be further from the truth. I say this without hyperbole: he was a certified monster on the defensive end and he was quite active on offense, too. That combination wasn't enough to prevent a deflating loss to Lithuania, though, a loss that would seem to mark a fork in the road for the French at EuroBasket. They turn things around, immediately, or starting booking their travel home.

Batum's problems continue to begin with his jumper, which again disappeared. During his five appearances so far, Batum is shooting just 21.1 percent from deep. The French need him to be at least a third scorer, if not a second scorer; by halftime, Batum had just two points and went oh-fer aside from a point-blank make. His shooting night started with a missed three in the corner, which seemed to get to him. On his next shot attempt, Batum passed up a three and tentatively stepped into a mid-range jumper at the top of the key, which he also missed. He left a right corner three short again just before he checked out with about two minutes remaining in the first quarter.

The frustrations continued after the break. He airballed a mid-range jumper (quickly claiming he was fouled), missed a left angle three, and had one last jumper hit the shot clock because it clanged so badly.

On the bright side, at least all three of his makes were entertaining. His first basket came just before halftime, as he finished a well-designed sideline out of bounds play that sent him circling back to the unprotected weakside for a lob. In the second half, he worked hard on the boards to get an and-one put-back (he missed the free throw) between two defenders. Then, in the game's final minute he put in a "too little too late" spinning finger roll in the paint. By that point, Tony Parker, who finished with 11 points and one assist, had already been pulled from the game and the white flag had been raised. His other two points came on free throws.

When Batum's shot hasn't been falling, his story has gone one of two ways: he drifts or he presses to the point where bad things start to happen. It was the latter scenario against Lithuania, although his turnovers mostly came in the first-half. Early on, he cut throw the paint, only to lose his handle on the ball as the Lithuanians went the other way. Not too long after that, he executed a pretty, hard spin move on the low block towards the baseline, only to force a bounce pass in traffic that wound up as a turnover and a lay-up going the other direction. He made that mistake again, trying to slip a pass through traffic that never had a chance, a decision that caused him to express some frustration with his (lack of) thinking. There was some bad luck at work too: a controlled drive all the way to the hoop saw a finger roll rim off, and Lithuania attacked aggressively the other direction, scoring in transition before Batum and his teammates had a chance to recover.

All of this would have been cause to complain had Batum not been channeling his struggles so effectively on the other end. He began with a bang on defense, executing another chasedown block (which lost some luster when Lithuania recovered possession and scored). He was only getting started. Within a few minutes, he was reaching high above his head for a tip steal on the perimeter, jetting out in transition for a picture-perfect two-on-one fast break dish to Boris Diaw, who finished the play. As play continued, he gave multiple-effort plays on multiple possessions to grab defensive rebounds, and he had an extraordinary block on Houston Rockets forward Donatas Motiejunas, swiping the shot near the rim and preventing a dunk try. During live action, the abrupt, surprising play looked almost impossible given how cleanly Batum dispossessed a hard-charging Motiejunas.

There were subtler moments of good defense as well. He beat back fast on the break to get basket side, then held his position on the block against a bigger opponent without fouling, thwarting the possession. Seconds later, on the same defensive stand, he got a deflection out of bounds (one of many on the night). Before halftime, he took a charge straight in the chest and got another athletic steal. In the third quarter, he altered a shot in transition and, as the game tensed up, Batum picked up his on-ball defense all the way out to halfcourt.

There were just two defensive hiccups on a night where he was otherwise playing with top energy and effectiveness. First, he received a technical foul for flopping while defending a baseline drive. It wasn't the wrong call but it wasn't all that expected, either. Second, he was caught underneath the hoop late in the game and forced to foul Toronto Raptors center Jonas Valanciunas, who powered through to a finish for the and-one. There wasn't much he could do on that one and it was just one more disheartening punch in a series of them late in the game.

Ultimately, France finds itself at the mercy of Batum's ability to generate his own offense. Without him back gunning on a few more cylinders, they will find it quite difficult to keep up with the better teams in this tournament. Down the stretch, France's other shooters couldn't knock down their looks and no one besides Parker is really equipped to generate consistent offense one-on-one in isolation, although center Alexis Ajinca had a nice night with 10 points and six rebounds.

Their plan in this one -- to keep Batum on the move as much as possible and use him to set up drive-and-kick attempts -- doesn't look like it will be enough. Indeed, Batum should have had about five assists. A nifty flip pass to Diaw in the first quarter ended with a miss. An off-the-dribble move set up a wide open Ajinca for a mid-range shot, which missed. A late curling drive action from Batum created tons of space for Mickael Gelabale in the right corner, but he couldn't connect. The Lithuanians broke up a few other opportunities by bumping Batum during his curls or on the catch.

As the French move forward earnestly, they can take heart in the fact that at least Batum did flip the switch energy-wise after the meaningless opening round. Now, to see if he can find the bottom of the net.

For no good reason, enjoy this fairly amusing picture of the crowd (via ESPN3.com). 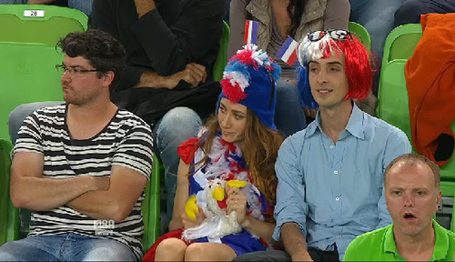 Against Lithuania, Batum earned a 6. This might seem a bit high, given his stat line and the result, but it was earned on balance (three on offense; nine on defense).