The Miami HEAT announced today that they have signed center Greg Oden. Per club policy, terms of the deal were not disclosed.

"After many months of discussion, evaluations and speaking with Greg, we felt it was the perfect time for him to make his comeback and re-enter the NBA with the Miami HEAT," said HEAT President Pat Riley. "It's a great challenge for him. We know all about his past injuries, but we feel that there is a huge upside and the possibility of him helping us. We will continue his program and then we will tackle basketball issues after that."

Oden, the first overall selection in the 2007 NBA Draft, has appeared in 82 career games (60 starts) and averaged 9.4 points, 7.3 rebounds, 1.43 blocks and 22.1 minutes while shooting 57.7 percent from the field. He has appeared in six postseason games totaling 30 points, 26 rebounds, five blocks and two steals in 95 minutes of action while shooting 11-of-21 from the field.

"I am very excited and happy to be here," said Oden. "I'm thankful to the Miami HEAT organization for bringing me in and I'm ready to get to work."

Reports last week indicated that Oden will receive a two-year deal at the veteran's minimum that includes a player option on the second season.

Here are a few Oden takes.

If you'll excuse a little personal reflection - we'll get to the basketball bits down below - I remember exactly when my inner fan was killed off. Living out east, watching live Portland Trail Blazers games was rarely possible. But after work every night it was time to fire up the DVR, take notes and write. The more you write, the more you take steps back from being a fan of your hometown team in order to provide a more balanced perspective, but all that would go out the window when Greg Oden pulled his weight up with the rim and slapped the glass. The Blazers had been a tough watch for many years, but Oden could make you feel 13 again as Brian Grant was fighting off Karl Malone elbows in the second round.

The ride didn't last long. After an up-and-down post-microfracture rookie season, Oden had had a healthy offseason to return to his collegiate form and by the time he finished practicing with USA Basketball and reported early for training camp, he looked leaner and more agile than he had in years. The season started and as long as Oden wasn't in foul trouble, he was a force. For one joyous month, everything went as planned. Then came December 15th, 2009.

I read the news on Twitter at Kings just off Boylston Street in Boston. Box scores were typically avoided when the game was ready to be watched later on, but it seemed necessary to check in on Oden's encore to his 13-point 20-rebound performance against the Miami HEAT. Less than five minutes into the game against Houston, Oden went up to contest a shot by Aaron Brooks and crumpled to the floor. Nothing had touched his knee. I sat in silence, waiting while friends drank and had a merry evening. Just get up. Get up. It's fine. But it wasn't. Oden was carted off the floor having played his final possession for the Blazers.

That Oden has spent so much time away from the NBA game is part of the reason what remains of the Greg Oden era in Portland is dozens of non-basketball related stories. The fact remains, though, that when Oden played, especially down the stretch of the Blazers' 54-win 08-09 campaign, he was a force to be reckoned with.

It wasn't Oden's fault his knees betrayed him. It wasn't his fault that Kevin Durant turned out to be not of this planet. Oden's career in Portland was a train wreck in slow motion. His social life was consistent tabloid fodder in a town almost totally devoid of tabloids. What's not to love about that?

It seems only fitting that Greg Oden gets a second act and a chance to write some new stories that, hopefully, will include at least a little bit of basketball.

PS Please allow me a rare aside...

I spent last week vacationing in California and saw a photography exhibit in Laguna Beach. There were lots of great photos but only one really stopped me in my tracks. The shot, taken by a high school student, showed the shadowy outline of a single bird on a sandy beach completely engulfed by an insanely bright orange sunset. Not to be flip, but this was basically Hell Bird.

I didn't think anything would stun me quite like Hell Bird for a long time. Then I saw this picture of Greg Oden in his new Heat No. 20 uniform via the Miami Heat on Twitter. Wham. 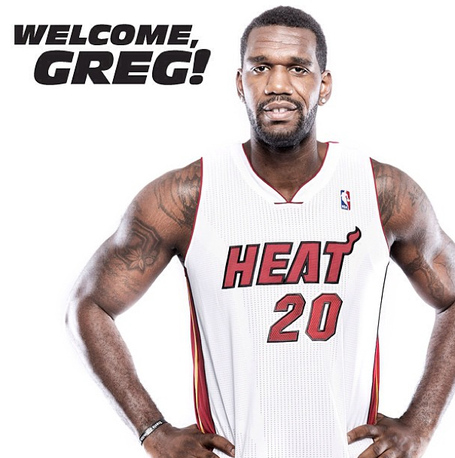 Timmay's piece about moving on was right on the money, but please give me a minute while I pick myself up off the ground.