The Most Asked Question at Vegas Summer League

Dave Deckard of Blazersedge,com answers the question most asked of him while observing the Portland Trail Blazers in the 2013 NBA Summer League from Las Vegas, Nevada.

Share All sharing options for: The Most Asked Question at Vegas Summer League

Hanging around in Las Vegas for the week with Blazer's Edge t-shirts on has given me the opportunity to meet a few readers. Thanks as always to those who take a moment to say hello. We appreciate you and the thought you put into the site and it's always a pleasure to meet fellow fans and B-Edgers in person. We're a mixed and lively lot!

This year has been a little different in that most people haven't just said hello, but have jumped in and started asking questions. It seems like most people feel the team is in flux right now, creating a higher-than-normal level of anxiety and/or anticipation. The most common opening question has been what I think about C.J. McCollum and the young guys. My impressions so far are listed here. But after that has come the Most Popular Question to Ask Dave in Vegas, namely some version of:

"So why do you think the team (circle one): sucks? is tanking? will be blown up? is doomed?"

The funny thing about this is that I don't think any of these things and never have. Folks are confusing the reaction to my posts with the content of my posts. Those are often closely linked, but not always.

I have taken a critical stance on a few specific things involving the Blazers' decisions to construct the team as they did last year versus the payoff it actually brought in free agency. But it's important to note that those are past and present events. They need to be separated from my assessment of the future direction of the team. While I believe the franchise is signaling a move towards that future direction, that stance does not equal condemnation. It's value-neutral. "Here is the situation, here are the moves, here is where they logically lead." None of that equates to sucking, tanking, or predictions of doom.

While fielding these questions at the venue I came up with a simple chart to demonstrate Portland's apparent situation moving forward. I don't have the means to draw it on the road on my laptop so I've just taken a homely photo from my binder to share here. 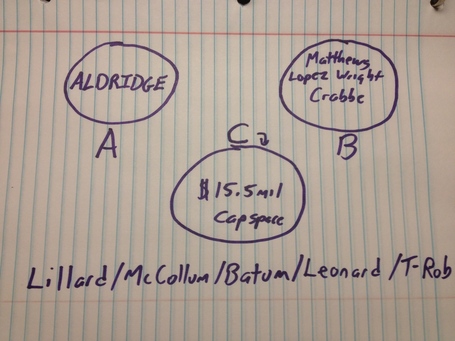 Along the bottom are listed the five major players for sure under contract through the summer of 2015: Lillard, McCollum, Batum, Leonard, and Robinson. That's the core which, barring trades, will for sure endure past that off season.

Understanding Portland's decision tree over the next couple years is easy. The Blazers can add any two of those resource circles to their core five moving forward from 2015, but not all three. The obvious follow-up question: "Which choices make the most sense?"

Choosing Circles A and B would allow the Blazers to retain nearly all their current players. But that's it. Cap holds will make it impossible for Portland to gain more space to sign new players than a mid-level exception. This option makes sense if you believe the current roster can contend for either a title or a significant playoff run with the addition of only 1 or 2 MLE-level players over the next few years.

The questions to ask here: Can this incarnation of the Blazers contend and how quickly?

Some people think this team will gel into a strong playoff roster given time. If that's your stance, then A and B is the way to go. This assessment appears to be based on a strong belief in the current core and in the efficacy of Portland's free-agent pick-ups this summer. The current core didn't win at even a low playoff level last season. It's fair to make the argument that the new players will make the team better, but how much better? I see a lot of young guys, calculated risks, future bets in that group and not many guys who have a proven track record of making teams better.

The perception of Portland's incoming players has been boosted by claims from national pundits that Portland made smart, good moves this summer. That's not an incorrect assessment but it needs interpretation. I've read those writers and even talked to a couple myself. In most cases their assessments translate as follows, "The Blazers made good moves for Portland." In other words, the Blazers made some nifty pick-ups given their needs, but that's differentiated from the Blazers having made pick-ups that let them rival teams truly in contention. "It's not a Houston move or a Golden State move but it was a good move." That's a compliment, but if you look at the bigger picture it means, "Houston is going to be better. Golden State is going to be better. Oklahoma City will still be better." And so on... Even the most optimistic projections don't put the Blazers at more than a mid-level playoff team, and that's if everything goes right. Most forecast a return to the playoffs alone as a decent barometer of success for this team.

This shunts us to the second question, "How quickly can the Blazers achieve whatever they're going to achieve?" The rationale behind this question is LaMarcus Aldridge's unrestricted free agent status in 2015. Choosing Circle A assumes the Blazers will keep him, but that choice is up to him, not them. He'll turn 29 that summer, looking at 3-4 more years of prime production and perhaps 6 more years of career total, having spent the last 9 with the Blazers. Will just making the playoffs a time or two without contending be enough to convince him to finish his functional career with Portland? If not, can the now-young Blazers reasonably be expected to do more than that over the next two seasons? Can the Blazers afford to risk not getting any return for Aldridge beyond cap space if he walks?

Even if you think Portland's new acquisitions are going to be nifty as pie and are a huge proponent of Circle B, that last paragraph should make you question whether keeping Aldridge with that group can be done without jeopardizing the team's future growth potential.

Going with the Circle A and C option, keeping Aldridge and using cap space to build around him, echoes Portland's situation in this 2013 off-season. Having lined up several contracts to expire in 2015, the Blazers could take another swing at building around LMA. The stumbling blocks here are more significant than those in the first option, though.

1. If you don't forecast Aldridge staying as the current core builds, would you forecast him staying while most of that core was recycled? You'd have to find a pretty big name with that $15.5 million to make a difference.

2. You'd be down a starting shooting guard and a starting center in this scenario. If both Meyers Leonard and C.J. McCollum are ready to start and perform admirably in those roles in two years, you could probably get away with this. Otherwise $15 million gets stretched pretty thin. Spending it on one player leaves big holes in your roster. Spending in on multiple players reduces the return at each position.

3. In order to make this work you have to deem every player Portland acquired this off-season outside of McCollum and Robinson as a temporary place-holder. You cannot be bullish on Portland's off-season this year and be a fan of the A+C option because most of the players acquired will be gone in two years.

One way to get around Roadblock #3 would be to speculate that Portland will groom these young players and then trade them before they have to be released. But that assumes that those players will develop to an appreciably higher level of value in just two seasons. Making those moves would also eat into the cap space in Circle C, rendering it much less significant. The players you get back would have to propel Portland into contention in order to change the situation. Speculating that Portland's smart, cheap, developmental pick-ups can be parlayed into contention-level pick-ups in two seasons or less seems optimistic.

That leaves us with the third option, Circles B and C, keeping all of Portland's recent young acquisitions but trading away Aldridge to create the 2015 cap space Portland's contracts are lined up for. The downside of this is that the Blazers lose Aldridge. But they don't lose him for nothing. Instead they'd want assets to help them build around the core of Lillard, McCollum, Batum, and the Circle B guys. They'd look for draft picks or young, talented players who wouldn't impede their cap. Then they bolster those extra assets with signings in 2015, creating a new push forward.

This option absolves the Blazers of having to worry about Aldridge's yea or nay in 2015. It puts them back in control of their future. It also frees them from having to make good on their young guys in 2 years or less, giving them a longer window in which to develop. It strengthens the case that the Blazers actually do believe in their new players instead of just viewing them as a roll of the dice while they punt and wait for 2015 to roll around.

In short, you have to make some pretty jarring turns and rely on hope in order to make the first two options make sense. The third option is consistent right down the line even if you only get the responses you'd expect from all your players, i.e. Aldridge not wanting to stick around through building projects for his entire prime and younger players taking longer to develop and gel while some of them don't pan out at all.

This is not a prediction of doom. This is looking at Portland's actions, assets, and options and coming to the conclusion that the presumptions which supposedly guided the franchise's goals up to this point don't make as much sense anymore unless a truly miraculous confluence of events transpire quickly. That's not likely to happen. Therefore the Blazers' next decisions will be based on a new set of criteria and in all likelihood based around a new generation of players, the beginnings of which you are witnessing in this year's Summer League.

Obviously you can monkey with the chart by taking away some players from Circle B or positing trades of the five players under contract at the bottom of the page, but you'll find that either you lose cap space to the point it's ineffective or you face the same problem of retaining Aldridge through what ends up being a rebuild by another name. The way the Blazers have structured their contracts and talent, Aldridge sticks out clearly, doubly so when you consider that he's Portland's only player with enough gravitas and star-power to bring in bona fide assets in return. Option C is the clearest way to build onto the roster, provides the most realistic timetable in which to operate, and gives the Blazers the most cohesive and manageable way in which to do so.

If you see me in-arena and want to talk charts and options firsthand, feel free! It's always a pleasure to talk. But now at least everybody has the thought process in front of them in equal fashion.