A look back in Blazer's Edge history during the Jerryd Bayless Draft.

Whew, what a season! 41 and 41 is nothing to sneeeze at! Especially being one of the youngest teams in the NBA. And all that without Greg Oden! Good thing microfracture surgery is not the end of the world it used to be. Players like Amare Stoudamire and Zack Randolph came back from them, and Oden is younger than all of them. 2008-2009 should be a season to remember. And to top it all off, we have the 13th pick in the NBA draft, and Miracle Man Kevin Pritchard. The last two draft days have been a wild and exciting ride, and we expected this draft to be just as great. There are a lot of exciting point guards in this draft, including one Derrick Rose.

And because the Blazers would be picking so late, Blazer fans could sit back and enjoy what everyone else was doing. For the first few picks at least, right? At least until the inevitable draft day deals went down.

It wasn't necessarily a lock for Rose to go number one. This was a top two draft, just like 2007. And Michael Beasley was right there. Ah, who are we kidding. Everyone knew it would be Rose first. But it was close enough that Beasley was certainly going second. Chicago had jumped from the ninth spot on lottery night to the top in order to take the number one pick that year. So Rose was all theirs: 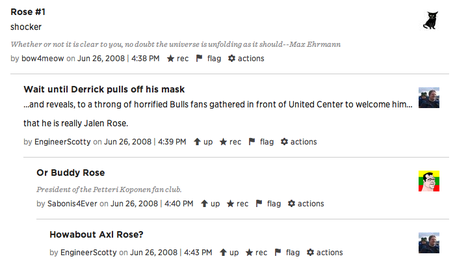 Now the Miami Heat had won the NBA Championship in 2006 behind Dwyane Wade and Shaquille O'Neal. They had added some more pieces in Shawn "Matrix" Marion, Jason Williams and Alonzo Mourning, who was home for one more shot. And because of injury, they ended up with the worst record in the NBA. They only won 15 games that year. But with Wade due back from injury, maybe they could reload Spurs-style, like David Robinson did with Tim Duncan. And Beasley was going to be the new Tim Duncan. Or, maybe not...

As there is every year, since the NBA stopped letting High School players into the NBA, there has always been one stand out prep player who has been heads and shoulders above everyone else. This had been dubbed a year earlier as the OJ Mayo draft. And while his year at USC wasn't perfect, the shine of his Prep career hadn't faded.

The Minnesota Timberwolves had become the laughingstock on the NBA. They had traded away Brandon Roy in 2006. They traded away Kevin Garnett in 2007. And this year, they had the 3rd pick in the draft. So it looked like OJ Mayo was a good player to start turning things around with. Right?

Now things are going to get interesting. The top three were no big surprise. But how 4-11 would go were anyone's guess. Rumors had been on-again, off-again about Seattle trading down from the fourth pick with the Clippers. They had the rookie of the year in Kevin Durant. They had Jeff Green. And that was about it. They weren't as bad as Miami. But pretty close. It was enough to make one feel pretty smug about getting Oden, even if we had to wait a year because of microfracture.

There also was a player that year from UCLA who about a month before the draft had Portlanders excited. Most mock drafts had him going between 11-15 in May. And his college pedigree seemed like a good fit next to Roy. A combo-guard who could drive for sure, maybe shoot a little, and really get after it on the defensive end, and was an excellent rebounder at his position to boot.

However, when Seattle took Russell Westbrook at number 4, it seemed like a spectacular reach.

Memphis was up next at five, taking Oregon's own Benedict Arnold, Kevin Love. Love was pretty much hated by everyone for going to UCLA over Oregon. And by pretty much anyone who knew him from the local High School. There was no love lost for Love on Blazer's Edge that day.

The Knicks were up next. And thankfully, Isaiah Thomas had just recently been fired as GM. However, they were still the most screwed team in all basketball. They would be stuck for YEARS with as bad as things had got. Eddy Curry still had way too much contract left. Zack Randolph was terrible. Stephan Marburry was a nutcase. And Jamal Crawford was a chucker extraordinaire. And their salary cap was all shot to hell with all those players that could never be traded for what they were getting paid.

Danilo Gallinari was taken sixth, and the New York fans got to boo both before and after the pick was made.

Well, other than Westbrook, the highly touted point guard of this draft were being left on the shelf. Portland needed a point guard. And things continued to look up as the Clippers picked.

Tension was starting to build. Both Jerryd Bayless and DJ Augustine would be great for Portland. Kevin Pritchard was known to trade. And rumors had been flying that teams were willing to trade their draft picks. And the lower they went, the more likely it was to be that one of those teams would be picking for us. Right? After 2006 and 2007, 2008 had to be just as exciting. This is Kevin Goldenboy Pritchard we're talking about! 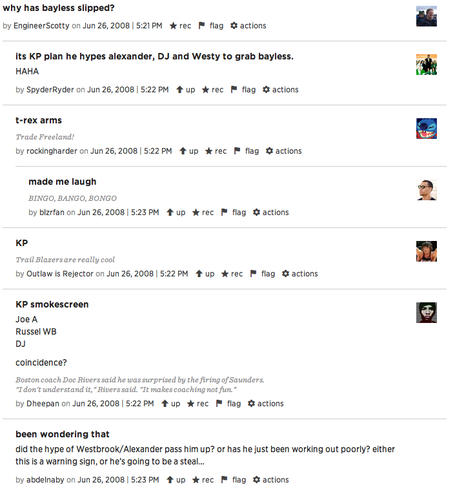 9th, the Bobcats take... DJ Augustine! The Bobcats already have Raymond Felton, and he's doing pretty good for them. They have to be trading this guy! C'Mon KP! Except the love for Bayless is even stronger. Brook Lopez goes 10th to the Nets. Bayless is still on the board! And Indiana doesn't need another PG! But wait, what's this? 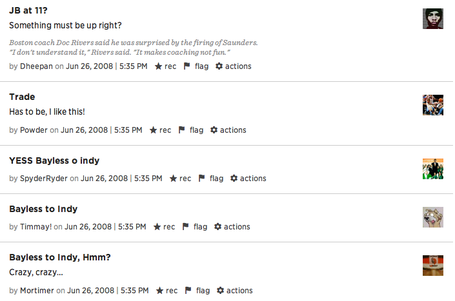 But according to the Blazers' announcers, everything is quiet in the war room. Uh oh. Were other teams afraid to deal with Pritchard? Were there really no deals to be had? Sacramento takes surprise pick Jason Thompson at 12. Blazers take Brandon Rush at 13. And things just seem out of place. It's not supposed to happen like this. We're the Portland Trailblazers, gosh darn it! We make draft day trades like kids eat candy. So things just don't feel right.

Suddenly, the guy Blazer's Edge sent to the media room breaks the news for us all to hear:

Pandemonuim and anarchy had a baby and it was here. Portland finally got their point guard. Might not have been people's first choice. Bayless sounded better. But we'd take him. And love him.

Wait, is that news right? Conflicting reports are flying everywhere. Was it Charlotte or Indy? Hell, it didn't matter, we traded somebody for somebody point guardish, and that's all that mattered.

Turns out the Blazers really did pick up Bayless, and Ike Diogu. In exchange for Jarrett Jack, Josh McRoberts and Brandon Rush. That was enough. We got our draft day fix. We got our man.

People started to lose interest in the remaining picks. Though Portland had recently bought the 27th pick. So there was still that and the second rounders to figure out. Except Portland didn't have very many open roster spots. And whoever would get picked would have to be stashed in Europe, or someone would have to be traded away. We did free up one with the Bayless trade.

But the first round continued as nobodies such as Roy Hibbert, JaVale McGee and JJ Hickson were drafted. Though, on the second first round thread, Seattle screwing over its fans still got a chuckle. Serge Ibaka. Pfft.

The story of the night, though, was the falling off of Darrell Arthur. He was scheduled to go up to 8-15 range. And he was still sitting in the NBA's green room. Talk about embarrassing. And as the picks went on, It just got funnier. Mostly because we're cruel voyeurs.

But Chris Douglas-Roberts was also falling. Nicolas Batum was a name that a few people wanted. But the Rockets ended up taking him at 25. Reportedly the Spurs had been interested in him at 26. But with Batum gone, they picked up some no-name player from IPUI named George Hill.

Still, Chris Douglas-Roberts would fall to 27, and that would be an awesome pickup.

Actually, it ended up being Darrell Arthur. The Raging Jaywawk. And that was okay. He was a lottery talent that had fallen out of the lottery. So two solid pickups for KP and the Blazers, picking up the guys who slipped father than they should have.

Things are quieting down. Chris-Douglas Roberts might still be around at 33, but now that's all there is to wait for. All the business is done... Wait, it's not done?

Oh ho! Eurostache! Let Batum play over in Belgium, or wherever he's from. Ripen up, and then come over when he's ready. It saves a roster spot. And we still need roster spots. Especially if CDR is there at 33. Wait, we traded 33? Oh well, I'm sure KP knows what he's doing. Maybe CDR will last to 36? Wait, 36 for three second round picks in next year's draft? Score! Besides, no one will ever heard the name Omer Asik after tonight. Well, we're pretty loaded on roster spots anyways.

The talking heads aren't fond of the Batum move either:

After that, the party wound to a stop. All the second rounders were traded. Draft day was over. That was a helluva ride. And best summed up in these immortal words:

Wednesday, we jump to one year ahead to Draft Day 2009.