A look back in Blazer's Edge history to the Greg Oden draft.

Technically, there was a 2006 draft day thread. It was back when SB Nation was in its infancy. Casey Holdahl (aka Lance Uppercut) liveblogged the events for Blazer's Edge (ironically, NSFBE). Dave was still over on Blazer Thoughts (Posts there are in Reverse Chronological Order, so scroll down to find the start of the draft.) And there were very few people responding to either of them. So yes, Blazer's Edge was there… but not in a way that you could really feel what was going on each minute of the draft.

2007 on the other hand, gave us the very first moment by moment draft day thread. Let's set the stage. For the first time in a very long time, there was a player making headlines for his play on the court, rather than off of it. Zack Randolph, Darius Miles, Sebastian Telfair, all of them were well known by those who read the local news. But Miles was hurt, and Telfair traded away. Just Zach Randolph was playing. And, to his credit, he played well. He was a 20/10 player. But a complete black hole on offense. And a player who excelled in getting his stats rather than helping his team win. But his off-the-court antics were well documented. He and his friends couldn't seem to stay out of trouble very long at all.

But as mentioned above, one player changed that. A rookie by the name of Brandon Roy. He was amazing to watch. So poised. So under control. Knew what he wanted to do. Always made the right play. This kid was going to be a star. And was already twice the leader Zach Randolph would ever be. His sidekick, LaMarcus Aldridge was quiet. Started the season off injured. Then came off the bench behind Zack. But when Zack got injured, Aldridge was let loose, scoring thirty a night towards the end of the season. Portland's future looked bright, if they could get it together. These rookies had already improved the Blazers by 11 wins. And things were looking up.

Portland had also won the number one pick in the NBA Draft. Jumped up from the seventh spot. The question was Greg Oden or Kevin Durant. Oden was a Giant of a center. Mobile and athletic. Strong and had a post game. He was the next Shaquille O'Neal or Dwight Howard, except with the ability to hit 70% of his free throws. This had been the Greg Oden draft since Greg Oden came out of high school. And despite a very vocal Ben Golliver over at DraftKevinDurant.com (the site no longer exists, unfortunately) the World pretty much knew Greg Oden was going to be the Blazers' pick.

But that's not all that was going on during the draft. Blazer fans were certainly interested in who was finally chosen, but the rest of the NBA was at work as well. While Oden was going to be the last big piece we needed to get out of the draft, the Seattle Supersonics were just preparing to start building through the draft. And in doing so, set Boston on the path to quick rebuild:

Things were pretty quiet during the first few picks. Horford goes unsurprisingly at 3, Conley seems to be a reach at 4. Jeff Green goes at 5, causing people to wonder who will play small forward in Seattle. It was a tad redundant, but maybe that skinny Durant kid would flesh out his body, and play some PF? Speculation was just starting when this happened:

Yi Jianlian had publically stated before the draft that he would not play for the Bucks, because they did not have a large Chinese presence in Milwaukee. They had warned Milwaukee not to select him, and did not invite the Bucks people down to Los Angeles to watch Yi post up a chair. Next, the Timberwolves drafted Portland Fans' favorite draft target (*from before the lottery), Corey Brewer. Bobcats took Brendan Wright. Bulls took Joachim Noah.

About this time, Blazercentric rumors start showing up. Well, we knew it was going to have to happen sooner or later. Especially with Oden being drafted. And Aldridge breaking out. And the discontent Portland had. It sounds like Zach Randolph may be heading to New York. The discussion though, does lead to our own Book of Jasher moment on Blazers Edge:

Turns out that is was closer to "Downright Terrible." Sorry EngineerScotty. But at least Knickfan was happy.

People were definitely ready for Zach Randolph to be gone. But not like this. He had to be worth more than this, didn't he? Steve Francis and Channing Frye? And no draft picks? This is Isaiah Thomas and the New York Knicks fer gosh sakes. And we've got Kevin Pritchard. Where's the magic? Where's the pizzazz? Where's the value? Talk about a let down.

Still, we had Rookie of the Year Brandon Roy, new wunderkind Power Forward LaMarcus Aldridge and the number one draft pick, Greg Oden. We needed to make room somehow. And all it cost was Paul Allen's Money. And it was a Kevin Pritchard trade. He probably knew something we didn't? And with that fact, what could possibly go wrong?

The rest of the draft was going on, but there was Blazer news right in front of us. No one really cared what happened with anyone else anyways. We want all Blazers, all the time. And we got it.

We knew it wasn't going to be one of our big three. So who we lost probably didn't matter too much. What would be more interesting is who we picked up. Of course, some people had their hopes:

With the 24th pick inthe NBA Draft, the Suns sell the rights to Rudy Fernandez to Portland for $3M. We sent nobody out but cash! Nice! Though Phoenix fans start buying jerseys with the last name "Considerations" on the back. Portland fans who know Rudy are thrilled. Portland fans who never heard of him were confused. But in this internet age, it didn't take long to figure out. And fans were already starting to get excited for this spanish heartthrob. Too bad it sounded like it would be at least a year before he came stateside.

Still, no one was paying any attention to what else was going on. At least until more Blazer news broke. 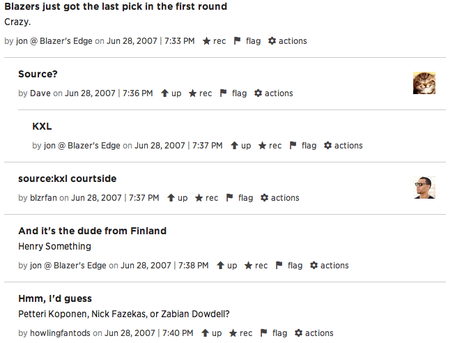 The rights to everyone's favorite Finnish prospect were also purchased for cash and the rights to our 42nd pick. Spending Paul Allen's Money has it's benefits.

Josh McRoberts and Taurean Green (who would "win us some games") get also drafted in there somewhere in the second round. But things had tailed off by that point. All the exciting stuff was done. And the next day, we had to assess where we stood:

The 2007 draft was over. Free agency was coming up. Though with LaFrentz and Darius Miles contracts still on the books, it wasn't going to be a big summer on that front. Still, it was a fun draft. Very eventful. The kind of draft we are starting to get used to. In fact, let's do this every year. Lots happening. Lots to digest. The hangover can wait until tomorrow. On draft night, we party. Yet, for Blazer's Edge, this would just be the beginning. The draft parties would get bigger and better. And this weekend, we'll see what we did for 2008.