A look back at Blazer's Edge history during the Damian Lillard Draft.

Ugh. What a terrible year. Brandon Roy was amnestied. Raymond Felton came into camp overweight. Jamal Crawford chucked like there was no tomorrow. Nate McMillan was fired. We had no GM. Marcus Camby and Gerald Wallace quit. Greg Oden was cut from the team. It was almost a blessing that the 2011 lockout had shortened the season.

Some good things happened. We traded Wallace to the Nets for their pick this year. And they were so bad, that it ended up being 6th overall. We also got a chance to take flyers on draft failures, just to see if they had anything left: Jonny Flynn, Hasheem Thabeet, JJ Hickson. And they weren't completely horrible. Didn't win any games with them, but they filled in well when the regular starters ended the year on the injured list.

We also hired a new GM. Apparently the guy responsible for getting Chris Paul to the Clippers. One Neil Olshey. No news on a new coach yet. But whispers are that Kaleb Canales is in the lead for the job.

But this was the 2012 Draft. Everyone knew who was going number one. The Unibrow. Anthony Davis. He was heads and shoulders above every other player in college that year. And was the can't miss prospect this year. After him, things got a little mushy. Thomas Robinson and Michael Kidd-Gilchrist were thought to be 2 and three. But Bradley Beal and Harrison Barnes were right there. But shooting up the draft boards was a four year senior from Weber State.

Blazer's Edge had been buzzing about this guy. Either positively or negatively. Andre Drummond was also in the discussion at number six. A physical specimen out of Connecticut. Question arose about his motor and desire. But dang, he had an NBA ready body as a freshman.

The eleventh was another story. Some were still hoping that the early May mock drafts were accurate and that Lillard would be available there. Some wanted to move up from 11 and get a better player. Some wanted Zeller, Some wanted Lamb, Some wanted Henson. But most people wanted Leonard if there were no deal to be had. And as the draft day thread began, the Lillard/Leonard sentiment had settled in for a little over half the commenters. 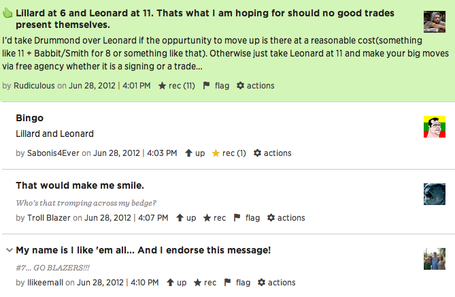 But all draft bring back the nostalgia of drafts gone past. Especially when a fan base becomes so united on pick. It was like Draft the 'Stache all over again.

One thing about the last season. It didn't leave us with too many assets. Felton was gone. Crawford was gone. Batum was a restricted free agent. And it looked like he was going to get paid by someone. 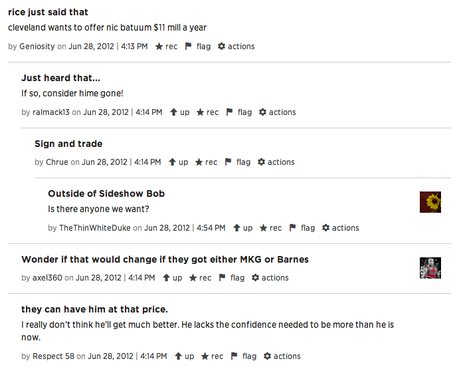 But Cleveland was all over the place in that night's rumors. Chad Ford, ESPN's draft guru was still submitting mock drafts minutes before the real one started. And it had both Robinson and Kidd-Gilchrist sliding.

But even as all this was going on, David Stern ascended the podium for his yearly booing (or boo-urns-ing). And five minutes later, The New Orleans Hornets selected Anthony Davis to the surprise of no one. THe question wasn't whether he'd be good, but how good, how fast. 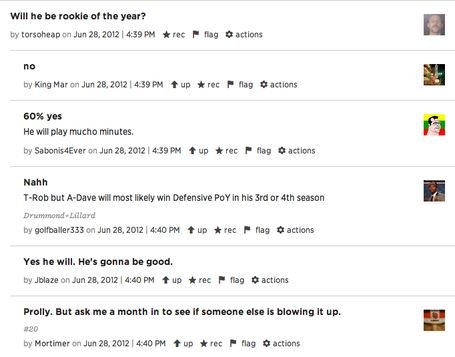 That was easy. And the next few would be easy too. Unless a trade went down. Still, it was tough to see so many good players, so many good rumors, and have Portland not in them. Maybe Olshey was the kind to keep things hush-hush? Who knows? But the Bobcats were officially on the clock. And we assumed the obvious.

But things were about to get... unexpected. 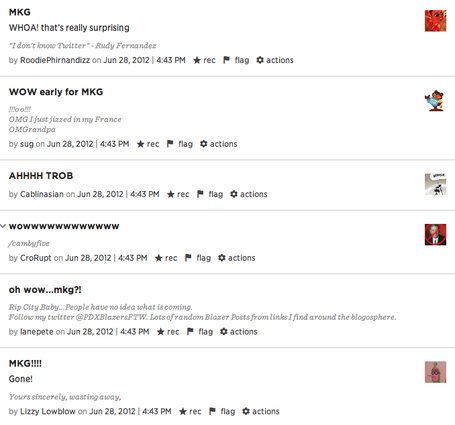 The Bobcats surprise everyone by taking Kidd-Gilchrist at 2. This was awkward. Washington needed a two or three, and MKG seemed to be the right fit for them. Thomas Robinson wasn't really a fit there, or fourth for Cleveland. 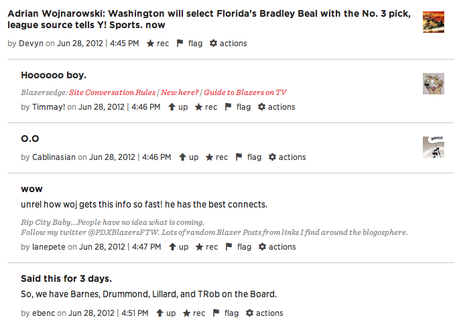 Washington took Beal. And that meant Cleveland had to do some thinking. Thomas Robinson was easily the best player left on the board. But Barnes would fit well. Drummond, if they wanted to take a chance. Tough seeing them reach for Lillard, as Irving has already had a spectacular rookie year at PG. Who would the Cavs pick? 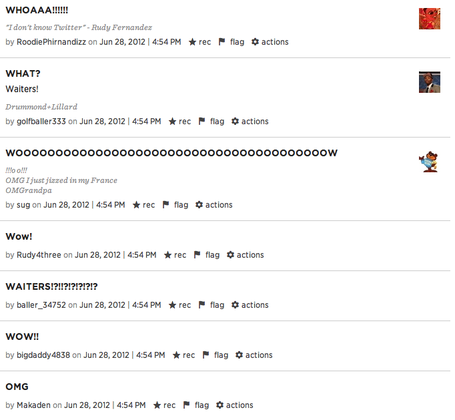 The Cavaliers had reached again! Tristan Thompson last draft. Dion Waiters this draft! Waiters didn't even start for Syracuse. And he was going this high? Is Dan Gilbert high?

That meant Robinson, Barnes, Lillard and Drummond were all still on the board with only one team ahead of us. The Sacramento Kings. The Kings had tied the Nets record-wise so a coin flip had been necessary in order to determine the order. 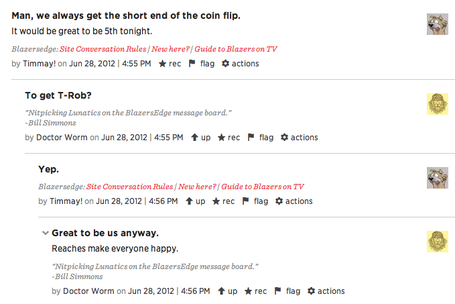 All the debate of Lillard versus Drummond would have all vanished in Robinson fell past the Kings. There would have been no question in anyone's (or hardly anyone's) mind on who that pick should be. Robinson was a high floor, high ceiling player. Someone who definitely would be sniffing all-star games during his career. And if some how the Kings past him up? He'd be all ours. Unfortuntely, it was never meant to be. 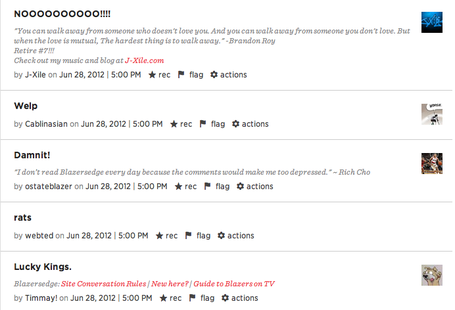 Well, it was a fun 15 minutes. So close to him. At least the Kings get a good player. And that meant it was down to Barnes, Lillard, and Drummond. Nobody expected both Barnes AND Drummond to drop to sixth. Would this change what the Blazers had in mind? Some argued that it should. Some said that Lillard was the best choice despite who was left on the board. Some were very worried that Paul Allen's penchant for PG's would surely get us in trouble once again. And maybe it would. Because Lillard was indeed the Blazers' pick at six. 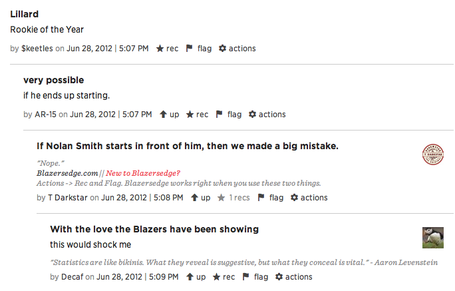 The great debate then started all over again. Would we regert taking Lillard over Drummond and Barnes? Would Lillard be just what the Blazers needed? In reality, no one knew. But that's what made it fun. That's what made it a discussion worth having. Fans get behind a particular player strongly, and that's wonderful. Someone to stand up and let everyone know why this guy is going to be a great player. Whether the fan ends up being right is almost beside the point. Because in that process, right or wrong, we learn about the players. We hear their strengths and weaknesses. We get to know them before they even touch the floor. And we get the opportunity to be passionate. And that is a truly great feeling.

But we still had another pick in this draft. And we didn't know who it was going to be yet. Barnes went seventh to the Warriors in no great surprise. But who would be left when the Blazers picked. Lamb? Rivers? Leonard? Drummond wouldn't fall that far, would he? 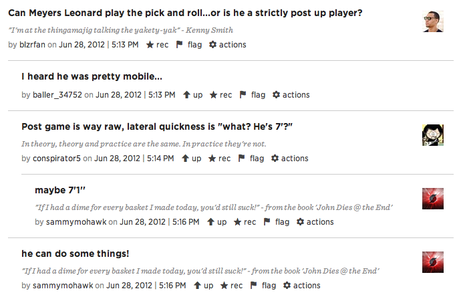 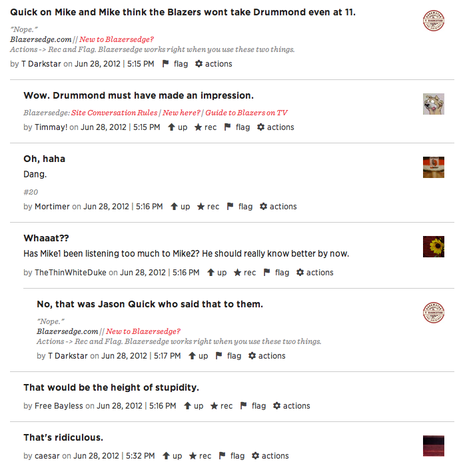 And yet, teams kept reaching for players ranked lower in mock drafts. 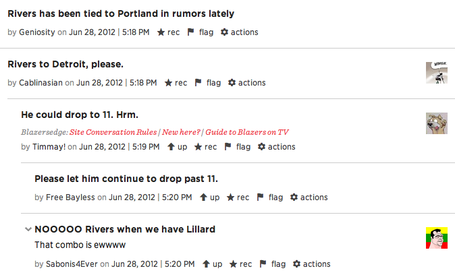 But for those fans who wanted a Lillard/Drummond combo, all hopes were dashed when the Detroit Pistons made their pick. 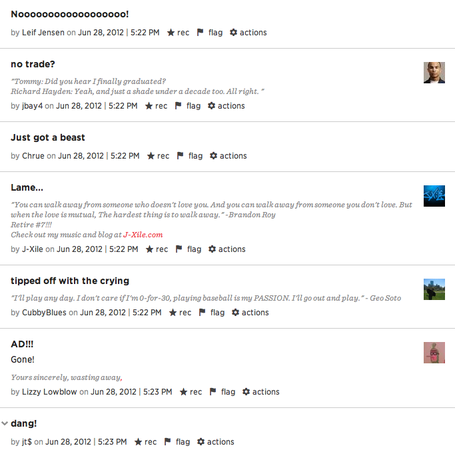 Austin Rivers went tenth to the Hornets. And that put Portland back on the clock. And except for a few Lamb supporters, most everyone believed Leonard was the best player on the board. So did the Blazers' front office. With the 11th pick in the 2013 NBA Draft, the Portland Trailblazers select Meyers Leonard from the University of Illinois. 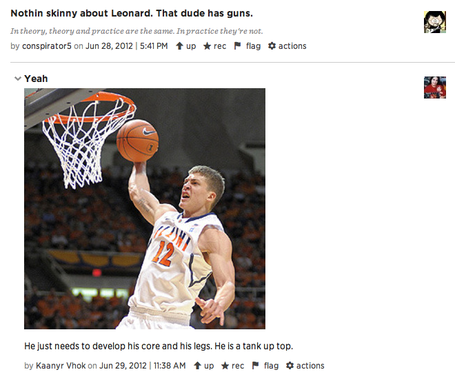 It was straight forward. That was weird.

The Portland Trailblazers had made a draft day deal every year since 2004. Paul Allen loves the draft and its wheeling and dealing. But this year, nothing? Well, Olshey's new. He doesn't know that he's supposed to play with the toys on draft day. And most of us are pretty happy with Lillard and Leonard.

I say most. But the debate still raged on. Because people were very passionate about their guy. And it passed the time remarkably well as the other teams worked through the first round. We had picks 40 and 41 in the second to get to. But if we ended up with anyone serviceable from that position, we'd be thrilled.

But, Blazer fans are draft day addictsC could we get a WE HAVE A TRADE somewhere? Anywhere? 'Cause if we don't get one, we'll make up our own. 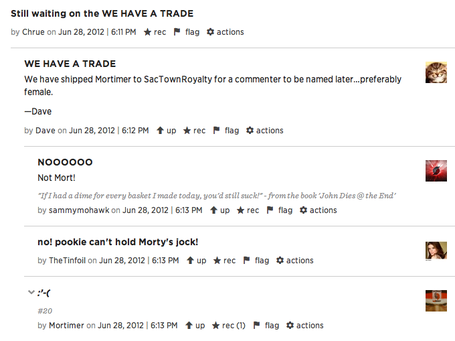 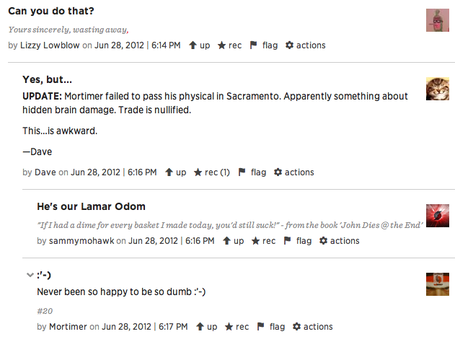 But while Blazer's Edge might be goofing around while other teams pick, that doesn't mean we weren't ready to jump back i when our turn came up again.In fact, we had to practice in order to stay sharp.

When our turn came around, we drafted Will Barton, whom we did not quite expect to be that low. And we drafted Tyshawn Taylor. But then it hit. News! Trade news! What! What! Oh. We traded Tyshawn Taylor to the Nets. Still, who did we get back? A player? Future picks? 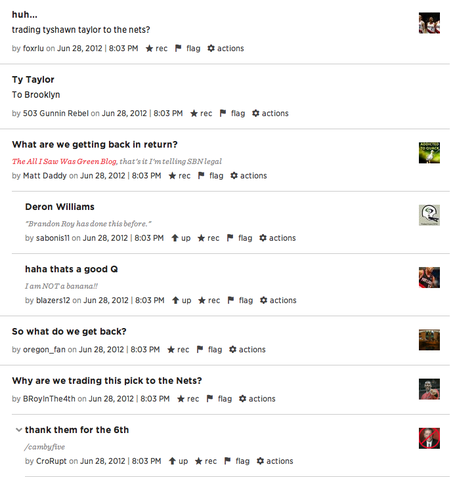 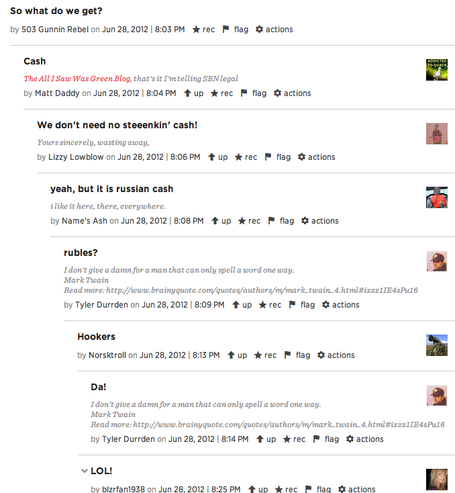 And after that, most everyone went home. Either to dream of the shiny new PG or lament the failure to get a shiny new Connecticut center. And by home, I mean to different threads. Because passion is awesome.

Still, Portland had a lot of work to do. They had very few assets to work with. Olshey said in the press conference (while the second round was still going on), that Lillard was expected to start right away, while Leonard had lower expectations. Growing would be just fine. So that meant that the Blazers had only four starters, and that was counting Matthews and Batum as starters, and Batum wasn't even signed yet. There was a ton of cap space, depending on how we wanted to use it. There was an opportunity for a new coach too. Maybe Mike Budenholzer or Brian Shaw?

One thing was for certain. It was nice to have the dead weight gone. To have that 2011-2012 season behind us. Now we could move forward. Rebuild, or retool, or whatever. For some, it felt like the nightmare of the last five drafts had continued tonight. For others, it felt like we finally got out from under their shadow. Time will tell which was right. But for me personally that night, it was nice to have some optimism once again.

I love this time of year. And 2013 is shaping up to be the best one yet. Fans are rabid for players like Adams and Muhammed and McCollum and Franklin and Zeller and Oladipo. If the Blazers keep their pick, I imagine at least 65% of Blazer's Edge posters will be disappointed that their guy wasn't the one the front office picked. And that is a whole lot of fun. Because the passion in the dialogue comes across. Even when people don't agree. We're all better for hearing it played out.

I have no idea who I'm pulling for in 2013. I've been right and wrong, and WAY wrong. It's fun to get behind someone, and make their case to others. But this time, I think I'll just sit back and enjoy the ride. Thank you everyone. For making Blazer's Edge a place I like to hang out.