A look back in Blazer's Edge History during the Kenneth Fari..., er..., Nolan Smith draft.

What a wild year. All year long there had been concerns about Brandon Roy. He was in, then out, then back in but not doing very well. It was hard to watch. Andre Miller and Lamarcus Aldridge looked good together, though. The midseason pickup of Gerald Wallace was nice. Wesley Matthews was keeping Roy's spot warm. Marcus Camby was holding the middle down well, as Oden was recovering from his second microfracture surgery. But Brandon Roy needed to be Brandon Roy again. If he could, we were looking real good.

And Game 4 of the opening round of the playoffs showed Blazer fans everywhere that Brandon Roy could be the very best, like no one ever was. But it was just one game. And we weren't sure if this was the last goodbye, or hello once again. If Roy could still play, even on that bad knee, then the Blazers needed very little. Oden back would fill one major hole. Which left only backup PG and PF. And perhaps a younger starting PG to replace Miller.

And we had just the General Manager to pull it all off. Key word: had. Rich Cho had been hired soon after Pritchard was fired last year. He lasted 9 months. Apparently Cho and Allen didn't work well together. And that's not good news for job security. The Charlotte Bobcats weren't about to let Cho go though. And hired him before draft day 2011. Portland had acting GM Chad Buchanan sort of at the helm. But little was known if he had much say in things.

To top it all off. Draft day started with the Rumor that Denver was willing to trade newly acquired PG Raymond Felton to the Blazers for Andre Miller. The rumor also mentioned the switching of the 21st and 22nd draft picks. Which was fine, if we could get our guy. And this year the consensus guy was Kenneth Faried. He not only led the NCAA in rebounding, he set the new all-time record for rebounding. It wasn't known if he could do much else. But that didn't matter. He penciled into the backup PF we needed perfectly. And mock drafts had him consistently at our range.

But that could wait until we got there. After all, someone might take him ahead of us. Besides, the Raymond Felton rumors were interesting.

Still with two GM's fired in less than one year, there were still some strong feelings about Paul Allen and the people he fired. Tom Penn, former Blazers' assistant GM had found a job at ESPN. On draft day, no less. And it made us wonder how bad things really were. 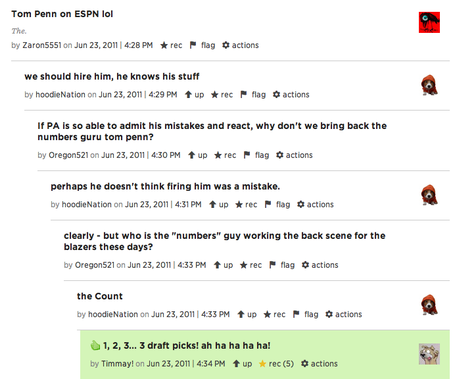 2011 was lining up to be a really weak draft. There were no "Tier 1" players to be had. Derrick Williams from Arizona and Kyrie Irving from Duke looked to be the best two players in the draft. But when was the last time a good player came from Duke? A whole lot of players looked good in college there, but not in the pros. And Irving had been injured half way through the season. Meaning you really just got a glimpse of him.

Definitely big question marks. And this was supposed to be the draft that got Cleveland out of the LeBron shaped hole they found themselves in? Break out the Comic Sans, because somebody should write in for a refund. Still, you've got to pick somebody first overall. And the Cavs take Kyrie.

Minnesota comes next and makes the easiest call since Seattle drafted Kevin Durant. Derrick Williams is going to finally turn that franchise around. Utah mildly surprises by taking Enes Kanter 3rd. He had spent the entire year at Kansas Kentucky suspended permanently for getting paid in Europe. So nobody really knew what he was going to do. But Utah thought he was worth the risk.

Blazer fans, however, are waiting for news from the Blazers' War Room. We had made a draft day deal in every year since 2004. Breaking tradition was unacceptable. So every piece of information was a coveted commodity. 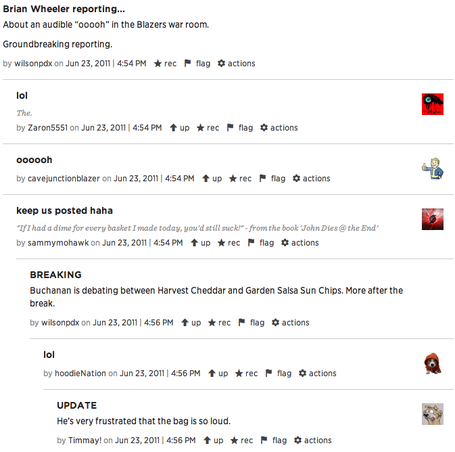 Cavs also ended up with the 4th pick that year. And with it, threw everyone's draft brackets out the window by drafting Tristan Thompson. 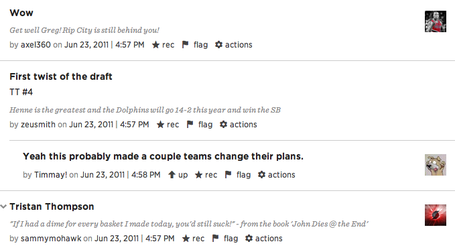 The draft rolls on, as Blazer fans wonder what their GM-less team will pull off. Rapters take Valanciunas. Wizards take Vesley. And then the Bobcats are up. Everyone was interested in what Rich Cho was going to do. We assumed that he wanted to blow up the Blazers and start from scratch. And Paul Allen wanted to make another run with the guys he had. Charlotte was definitely in rebuild mode. So this was the opportunity to see what he had in mind for Portland. And what he had in mind was Bismack Biyombo. And that was... interesting. 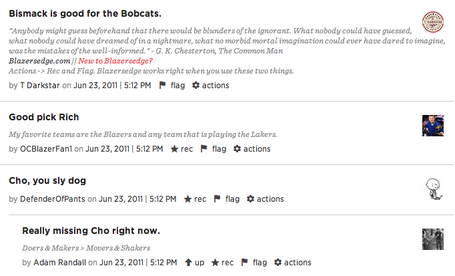 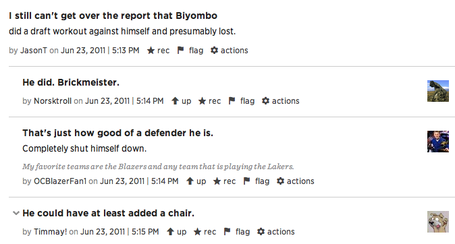 The draft continues for a while. Brandon Knight gets drafted lower than expected by Detroit. The Bobcats use their pick from Milwaukee to draft Kemba Walker. Sacramento drafts BYU legendary shooting star Jimmer Freddette. And the natives are getting restless.

There's no way we could end up that confused CJB. No possible way.

Now we're starting to get close to the Blazers pick at 21. And Kenneth Faried is still on the board. Also, news seems to be heating up about the Blazers making a move. 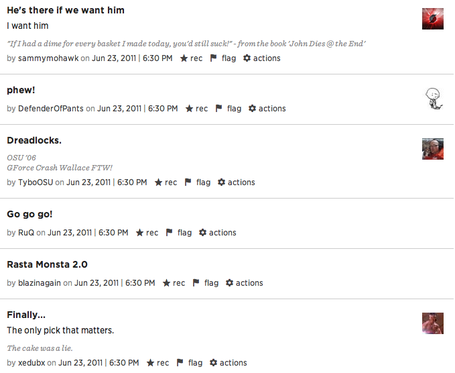 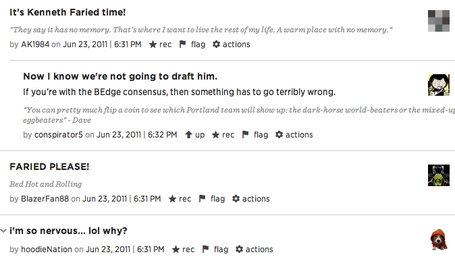 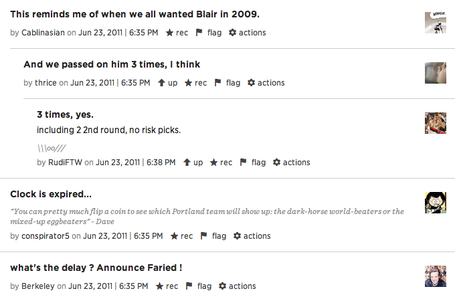 Time had run out. And nobody was walking to the podium. Did the Denver trade just go through? If it did, what did it look like? Like the rumors from earlier? Stern finally walks out and takes the podium. With the 21st pick in the 2011 NBA Draft, the Portland Trailblazers pick... 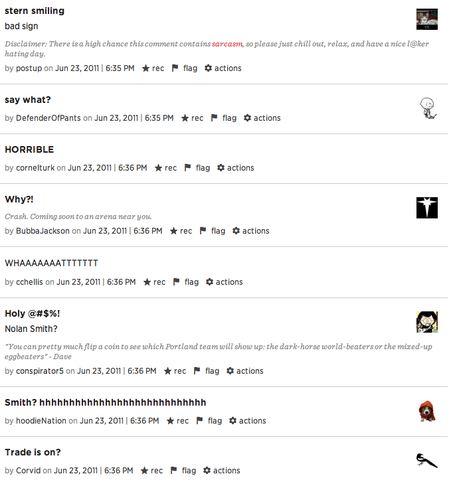 Now, hold on. The rumor was Miller for Felton. And the picks were swapped. This might not be that bad. 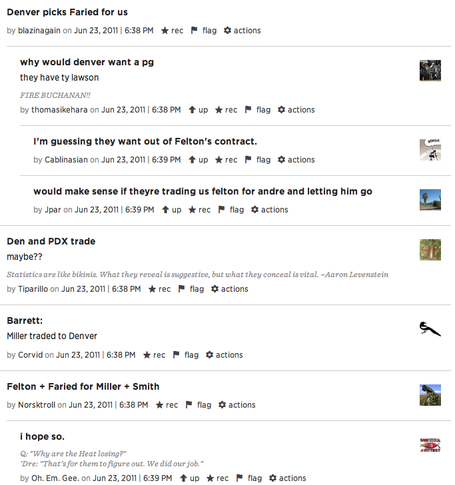 In fact, that's what's being reported.

And Wheels finally announces that we did in fact trade with Denver. We would be sending out Andre Miller and receiving Raymond Felton. And that there were parts of the deal that were still to come.

The assumption is that the picks were traded too. And when Faried goes to Denver, it seems our suspicions were confirmed. However, something didn't quite add up. 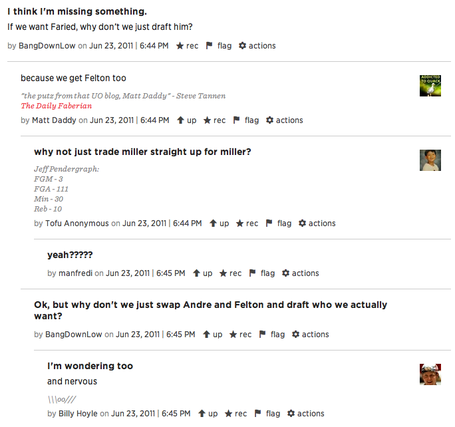 Wait. That can't be right. We have a glaring need for a PF who can rebound. Of course we got Faried. We had to. That's the player everyone wanted. And we always get what we want.

But the longer it took to announce, the more nervous everyone became. But there were so many conflicting reports bouncing about, nobody was sure of anything. But most people were putting two and two together and realizing that Portland did not actually get Kenneth Faried. And further news only confirmed this. 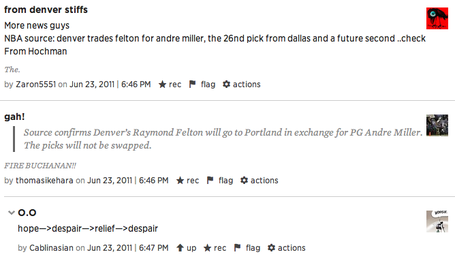 Still more news was coming in. Apparently, Dallas was in on this trade too. It involved the 26th pick. But other than that. details were lacking. Maybe we were getting the #26? Maybe denver was sending us Nene? Speculation was rampant.

Then conflicting information came out.

But eventually, we did find out more about how Dallas fit in to all of this. 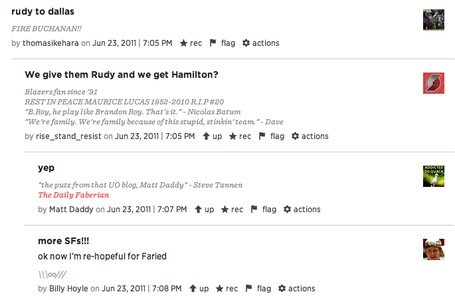 After a whole lot of hoping, and speculating and wishing, and crying, we finally got the whole picture of what was going on. 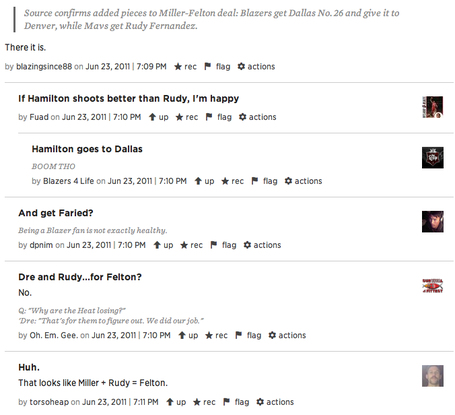 This was definitely not the draft we wanted. Felton might be okay. But passing on Faried? C'mon! We did end up drafting Jon Diebler in the second round, and Tanguy Ngombo for Minnesota. But story number one was Kenneth Faried. 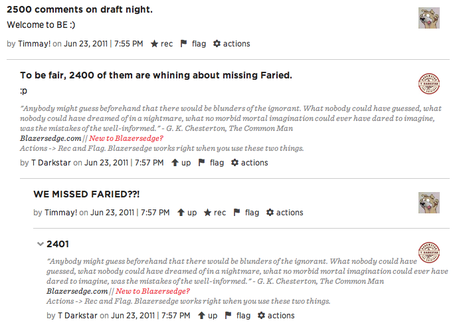 This of course caused no end of second guessing the reasons behind it. Some would even later guess that Denver made passing Faried a condition of the trade. Because that made more sense than passing on him for Nolan Smith. But this has started to look like a pattern. Despite all the hype. Despite whether or not we liked the draft at the time. Despite the only gem we did get (Nic). The Blazers had been bad at drafting since 2007.

And no matter how good Nolan Smith might turn out to be, this draft was no exception. Pritchard had struck out on almost everything since becoming GM. Cho didn't even get the chance. Buchanan obviously wasn't going to cut it. We needed a new GM. At least the upcoming lockout would give us time to find one. It would, right?

But the one thing the upcoming lockout would also do, is make us wait to see what we had. Who would Raymond Felton be for the Blazers? Could Roy overcome his knees like Game 4 in Dallas? Would Oden ever be healthy? With good news on all those fronts, the Blazers would be vaulted into contention. But that's a lot of fronts. Nothing to do now but pack up and wait. And hope they come to terms before training camp.