The NBA and Adidas have officially released the 2013 NBA Draft night hat for the Portland Trail Blazers.

The NBA and Adidas have released images of the official 2013 NBA Draft night hat that will be worn by whomever is selected by the Portland Trail Blazers, assuming they keep the pick of course.

The hat has "Portland Trail Blazers" in block letters across the front, a pinwheel logo on the under side of the brim, an NBA logo on the back and an Adidas logo on the left side.

Some details from a press release and an image below. The hats are now available on NBA.com.

Celebrating a new class of elite basketball players, adidas and the NBA are unveiling the official 2013 NBA Draft Cap collection.

In that iconic moment as names are called, the adidas snap back cap will be the first authentic team apparel worn by the NBA's new stars. The caps will feature NBA team names in raised, embroidered font, stitching on all seams, as well as tonal impact camo, team logos on the underside of the brim, and the NBA Logoman embroidered on the back.

The 2013 NBA Draft will take place on June 27 at Barclays Center in Brooklyn, New York. 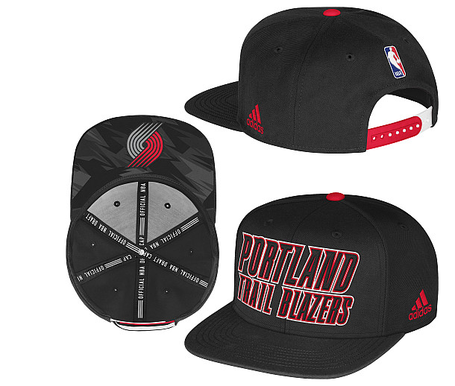