A look back in Blazer's Edge History during the... Dejuan Bl... er... Victor Claver draft?

Aw, man! Getting to the playoffs was awesome and all. But dang, we matched up poorly with the Houston Rockets. Yao Ming was too big. Ron Artest was too strong. Luis Scola was too greasy. And the cinderella season of the Portland Trailblazers went down hill fast. Still, we were growing. And next year our powerhouse lineup would be even better. Greg Oden, LaMarcus Aldridge, Nicolas Batum, Brandon Roy, and... Steve Blake? Surely Jerryd Bayless would grow into that spot eventually, right? And now that Sergio Rodriquez had earlier that day been traded to the Kings to move up from 38 to 31, Bayless would have nothing but open road in front of him. Raef LaFrentz's Expiring Contract (RLEC) was going to be up, and Portland would have a little over $7M in cap space to play with this summer.

But this year, our first pick would be at number 22, because Pritchard had earlier traded a second round pick and 24 to Dallas, so he must have a target in mind. Still, it's a little harder to get excited about number 22 compared with number 4 from 2006, number 1 from 2007, and number 13 from 2008. But we had Kevin Pritchard. So you knew somethnig was going down.

The number one pick in 2009 was a one man show. And that show was Blake Griffin. There were no questions about that big guy. The Clippers, on the other hand, had been a mess since forever. And they still hadn't lived down Michael Olowakandi. And this lead some to speculate on what would go wrong.

The Memphis Grizzlies were up next. And they had a tough choice to make. There was a spanish wunderkind PG who was eligible to be drafted. Real young, but lots of potential. And with the splash Rudy Fernandez had made in Portland, lots of people were lining up to see Spain's next great export: Ricky Rubio. Now, what you had in Rubio was anybody's guess. He could be the next big star. He could be the next Sergio Rodriguez. But the talent was there that people were talking about him at #2. Of course, there were surer bets, but the ceiling on players like James Harden and Tyreke Evans and Stephen Curry just wasn't as high as it was with Rubio. 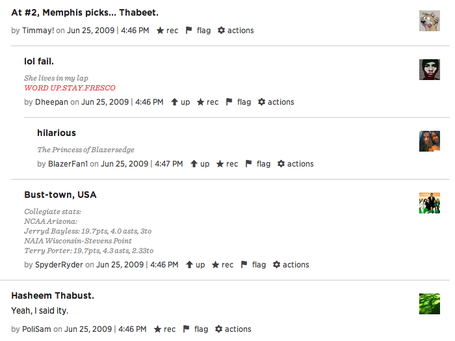 The Oklahoma City Thunder (still weird to say in 2009) also passed on Rubio, picking up James Harden. A productive collegiate, but slow for a slasher, and not a very good shooter from deep. A project to be sure. Sacramento passed on Rubio, not wanting a Yi Jianlian situation on their doorstep. They took Tyreke Evans, who was a a scoring PG? A combo-guard? Something, anyways. Leaving poor Sergio to be fighting for position behind Beno Udrih on the depth chart.

The Minnesota Timberwolves were up next. And they had just last month hired a new GM with a familiar face. The Oregonian's own David Kahn. So after screwing things up by trading away both Brandon Roy and Kevin Garnett, surely they would turn things around with a bright guy like that at the helm. Right? Right. They drafted Rubio 5th overall in the easiest draft decision anyone ever made. But the 6th pick also belongs to Minnesota. Who will they get to team up with Rubio and the new look Timberwolves? Jonny Flynn?!

Didn't they just draft a PG? Surely, they must be trading one of them. No? Really? Okay.

The Warriors are up next, and steal Stephan Curry out from under New York fans, who were just one pick away from getting their guy. They settle for Jordan Hill. Toronto picks up Demar DeRozan, promting one of the funnier lines of the night: 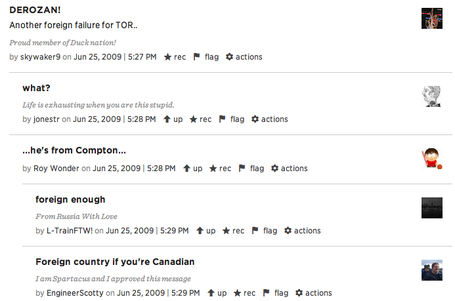 High School Phenom turned Euroleague Pro to avoid playing in college for free, Brandon Jennings was up next. And selected 10th overall by the Bucks. Jennings had hoped to go higher. Most people were surprised he didn't end up lower. Nets take Terrence Williams at 11. Bobcats take Gerald Henderson 12th.

And things are starting to get interesting. Because there were a whole bevy of point guards who were considered NBA starter quality. And other most of them were still on the board. Also on the board is DeJuan Blair. Who was an incredibly productive big in college. But news that he had no ACL's had come out, and no one knew what kind of hit his draft stock would take. It was enough to drop him out of the top ten. And if he's fallen into the teens, Portland fans are ready to move up and draft him.

Except nobody took Blair for us. Pick after pick rolled by. Hansbrough to the Pacers, Earl Clark to the Suns, Daye to the Pistons, James Johnson to the Bulls. Jrue Holiday to the Sixers. Still no Blair. But things are starting to get interesting for the Blazers. Only four picks between where we are and where he Blazers pick, and still a lot good players left on the board. Blair, Collison, Lawson, Maynor, Teague, Young. Someone good would be coming to Portland. Another young PG might be okay, but that's not who we want. C'mon Blair! Though, what if the unthinkable happens? 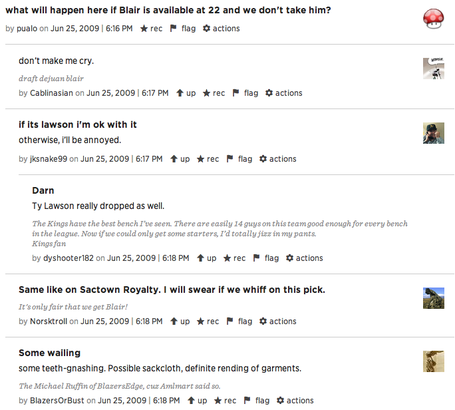 Minnesota... takes another PG. That's... um... different. Poor Ty Lawson. Atlanta takes Jeff Teague, good. The Jazz take Eric Maynor. Very Good! New Orleans take... Darren Collison! Holy crap! Blazer's Edge explodes with 176 comments about the Blazers taking Blair in the five minutes between the New Orleans pick and the Blazers' pick. Awesome! We need a solid backup PF! And there he is! There is no one better on the board! Moving up with Dallas' pick was a brilliant idea! The pick is in! Stern is coming to the podium! "With the 22nd pick of the NBA Draft, the Portland Trailblazers select..."

Victor Claver, a SF from Spain. Who definitely wasn't coming over that year. The excitement generated a lot of posts. But nothing compared to the wailing and gnashing of teeth that happened after that pick. A few people defended the Claver pick. A few more just said, "In KP we trust." But the general consensus was that Portland made a mistake. In fact, it was so all consuming, that nobody was paying attention to the draft anymore. Just woulda, shoulda, coulda... wait, is Blair still on the board? And how soon to 31? 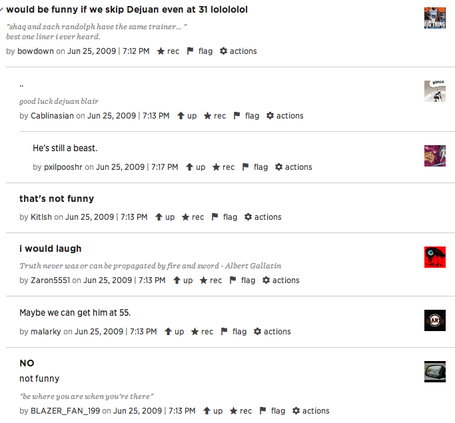 Excitement! Despair! Excitement once again! Cleveland takes Eyenga, and Blair is once again ours. That took some major chutzpa, KP, but it paid off. And once Adam Silver took the stage, teams were down to the two minute drill. Still after passing him the first time, would the Blazers pass him a second?

Silver steps up to the podium. The pick is in.

The Wizards draft Jermaine Taylor at 32, giving the Blazers one last chance.

And the Blazers pick Dante Cunningham

The thousand comments that follow are all pretty much the bemoaning of passing on DeJuan Blair. At least Patty Mills got picked up at 55. But after three years of draft magic, Blazer fans leave this one very disillusioned. Maybe we can pick up someone with our new found free agent money. I hear Hedo Turkoglu is available.