One national writer believes the Blazers should honor Marge Simpson with a jersey patch.

Kelly Dwyer of Yahoo!'s Ball Don't Lie has a great outside-the-box reaction to the news that Margaret Groening, mother of The Simpsons' creator Matt Groening, has passed away.

Born Margaret Wiggum on March 23, 1919, in Chisolm, Minn., Margaret was 94 years old. Margaret's parents, Matt and Ingeborg Wiggum, met on the boat coming to America from Norway. They settled in Everett, Wash., where the paper mill "smelled like money," and Matt worked as a machinist. As high school valedictorian and Miss Everett, Margaret's highest honor was being named May Queen of Linfield College. She graduated from Linfield in 1941 and married classmate Homer Groening, whom she chose because he made her laugh the most. Margaret taught high school English before starting a family, and her love of language was apparent in the many Double-Crostics she completed (in ink). Margaret and Homer supported the Oregon Symphony, the Portland Trail Blazers and many local yarn shops (Margaret was a talented needlework artist).

Dwyer's idea to honor Margaret, who served as the inspiration for Marge Simpson...

I think it would be a very cool - and very-Portland - thing if the red and black decided to add a small patch featuring a blue beehive hairdo next season. 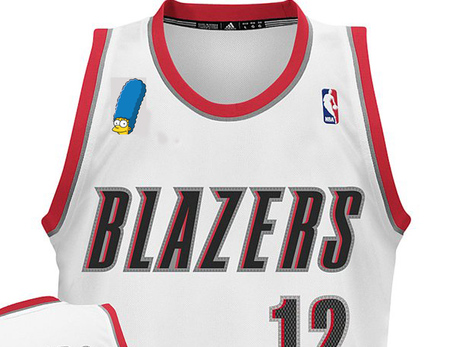