The Portland Trail Blazers announced Wednesday that guard Wesley Matthews has undergone a procedure on his left elbow that will sideline him for up to a month.

Matthews' recovery time is expected to be 3-4 weeks.

An "arthroscopic debridement" is a fancy way to say "clean up surgery," although the procedure (as noted below) can be used to determine whether additional surgeries/treatments are necessary in the future.

Arthroscopic debridement of the elbow is a procedure used to clear damaged tissue from the elbow joint. A small camera called an arthroscope is used during this procedure to let the surgeon view the inside of the elbow.

Conditions such as tennis elbow, cartilage or bone damage, or arthritis may benefit from arthroscopic debridement of the elbow. This procedure may also be used for diagnostic purposes as well, as the use of the arthroscope lets the surgeon see the inside of the elbow joint. This makes it easier to assess damage and the correct course of treatment.

After anesthesia is applied, the surgeons makes several several small incisions around the elbow. A small camera called an arthroscope is inserted into one of the incisions, while small tools are inserted in the others.

One of the small tools is used to pump fluid into the joint in order to expand it. This makes the procedure easier to perform by allowing the surgeon more room and providing a clearer picture from the arthroscope. The surgeon uses the arthroscope to inspect the joint to determine the extent of damage.

You can also check out an easy-to-follow, in-depth video Powerpoint-style presentation of the procedure at TucsonOrtho.com.

Matthews battled hip, ankle and elbow injuries last season and he was shut down on April 7, 10 days before Portland's final regular season game. He appeared in 69 games and had his three-plus year Ironman streak snapped in December. 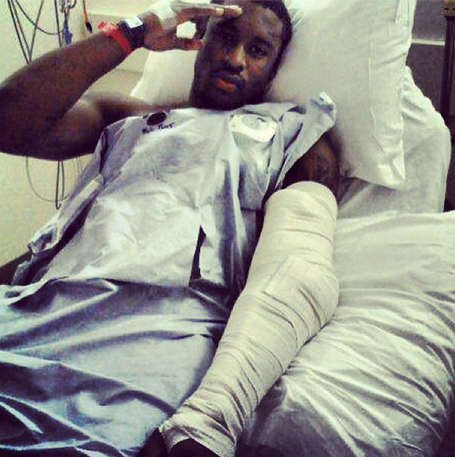 If you're nuts, you can watch this video of an arthroscopic elbow debridement via YouTube user londonhandclinic.