The NBA and Taco Bell have apparently -- and inexplicably -- left Portland Trail Blazers forward Luke Babbitt off something called the "Western Conference Big Box." Blazers forward LaMarcus Aldridge does appear on one of the box's designs.

All told, 42 NBA players are included on the promotional items but Babbitt, widely regarded as the Chalupa King, is not pictured in any of the promotional artwork. What's the point of a nationwide advertising campaign if the league's leading Tex-Mex pitchman isn't involved?

"It feels good to give the fans Taco Bell," Babbitt said once, hopefully not for the last time. 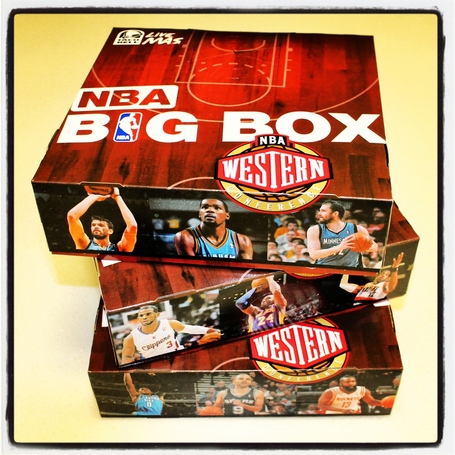 What is this thing?

The NBA and Taco Bell have teamed up to create six different NBA-themed boxes filled with your Taco Bell favorite menu items on the inside, and sporting dozens of your favorite NBA players on the outside.

Use the box to create a miniature basketball court: Each box includes a perforated circle so that you can pop your cup (complete with artwork that makes it look like a hoop) in the box, ball up your wrapper, and take your best shot. Go head-to-head with a friend by connecting two boxes to create a full court.

Babbitt, 23, is set to become an unrestricted free agent this summer after averaging 3.9 points and 2.2 rebounds and finishing as a finalist for the 2013 Sixth Man of the Year Award.